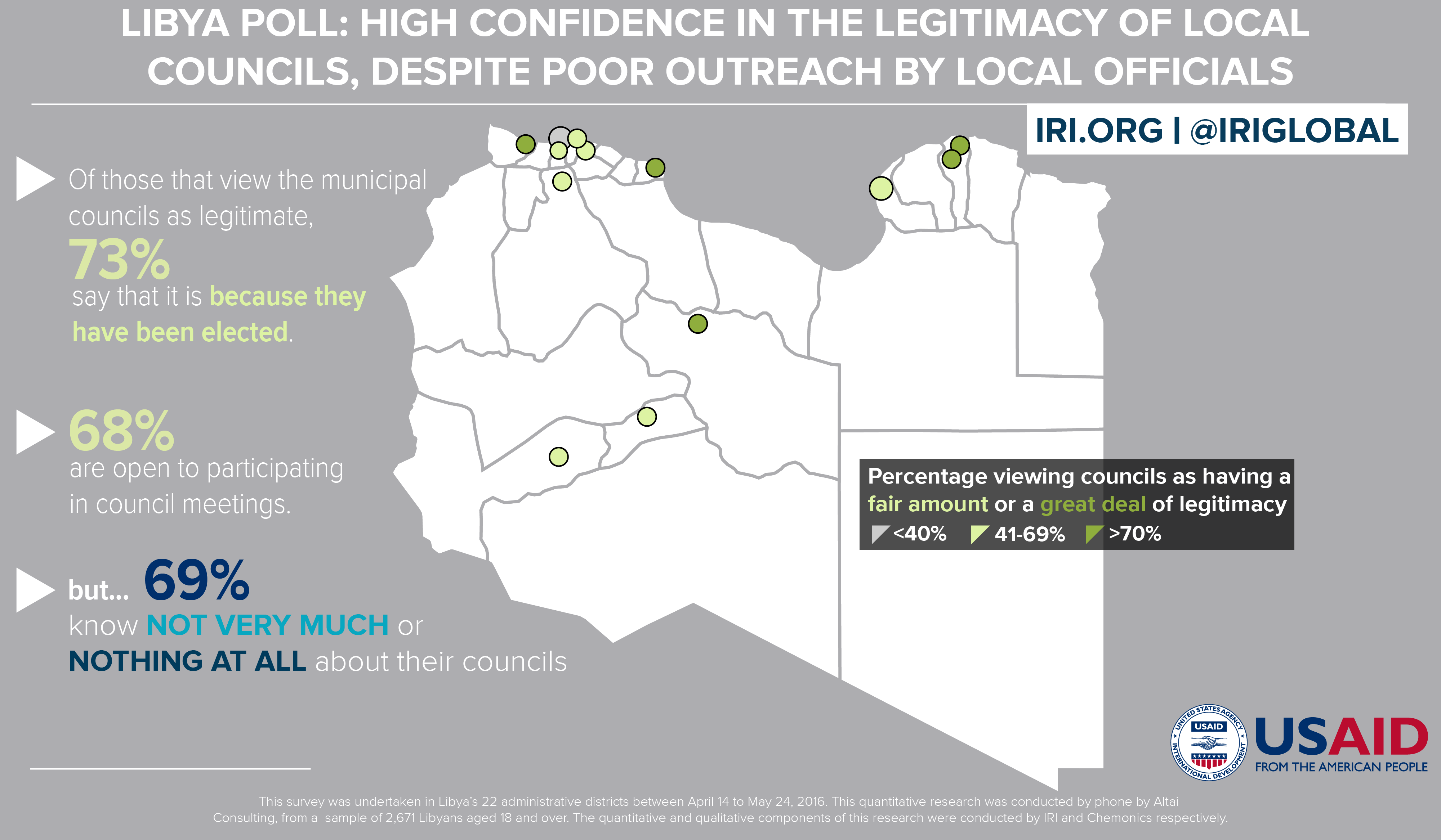 Tripoli, Libya— A new nationwide poll and the findings of focus groups conducted in Libya by IRI’s Center for Insights in Survey Research in collaboration with USAID/OTI’s Libya Transition Initiative 2 (LTI2) reveal that municipal councils are viewed as one of the most legitimate authorities in the country, due to their status as elected bodies.

Despite a general lack of knowledge of the responsibilities of the councils, a majority of respondents indicated their interest in participating in local governance.

“This poll and the accompanying focus groups demonstrate a positive correlation between elected bodies and political legitimacy among Libyans,” said Scott Mastic, IRI Regional Director, Middle East and North Africa. “However, there is clearly a deficit of knowledge of the functions of the municipal councils. In the future, these bodies should focus on expanding their outreach to educate citizens on the active role they can play in local government.”

According to IRI’s poll, 55 percent of Libyans believe their municipal council is legitimate either “a great deal” or “a fair amount,” though this number varies between municipalities: more than 70 percent of respondents affirmed their council’s legitimacy in Bayda and Misrata, but less half of those polled in Benghazi and Tripoli center expressed the same view. Of those that view the municipal councils as legitimate, 73 percent viewed elections as the primary source of legitimacy for these institutions. Nationwide, municipal councils were seen as the most legitimate local actor representing constituents (33 percent), compared with elders/tribal leaders, parliamentarians, civil society and businessmen. However, when broken out by community, elders/tribal leaders were seen as most legitimate in Sabha and Ubari.

A majority of respondents (69 percent) reported knowing “not very much” or “nothing at all” about their municipal council. Communication with local constituents appears to be a key weakness for municipal councils: only 22 percent of Libyans had heard of public meetings organized in their municipality. According to one focus group participant in Bayda, “Although I’m satisfied with their work, their communication is very poor and must be improved, for instance by assigning local representatives.” Despite the apparently poor levels of public awareness of the activities of municipal councils, a strong majority of Libyans (68 percent) would like to participate in a public meetings.

This USAID-funded survey was undertaken in Libya’s 22 administrative districts between April 14 to May 24, 2016. This quantitative research was conducted by phone on behalf of the Center for Insights in Survey Research and LTI2 by Altai Consulting, from a sample of 2,671 Libyans aged 18 and over. Thirteen of the municipalities within those districts were oversampled to provide a more focused analysis of the municipalities targeted by IRI and LTI2 programming.  LTI2 conducted 18 focus groups in 11 of the oversampled municipalities to provide additional qualitative data to the survey.