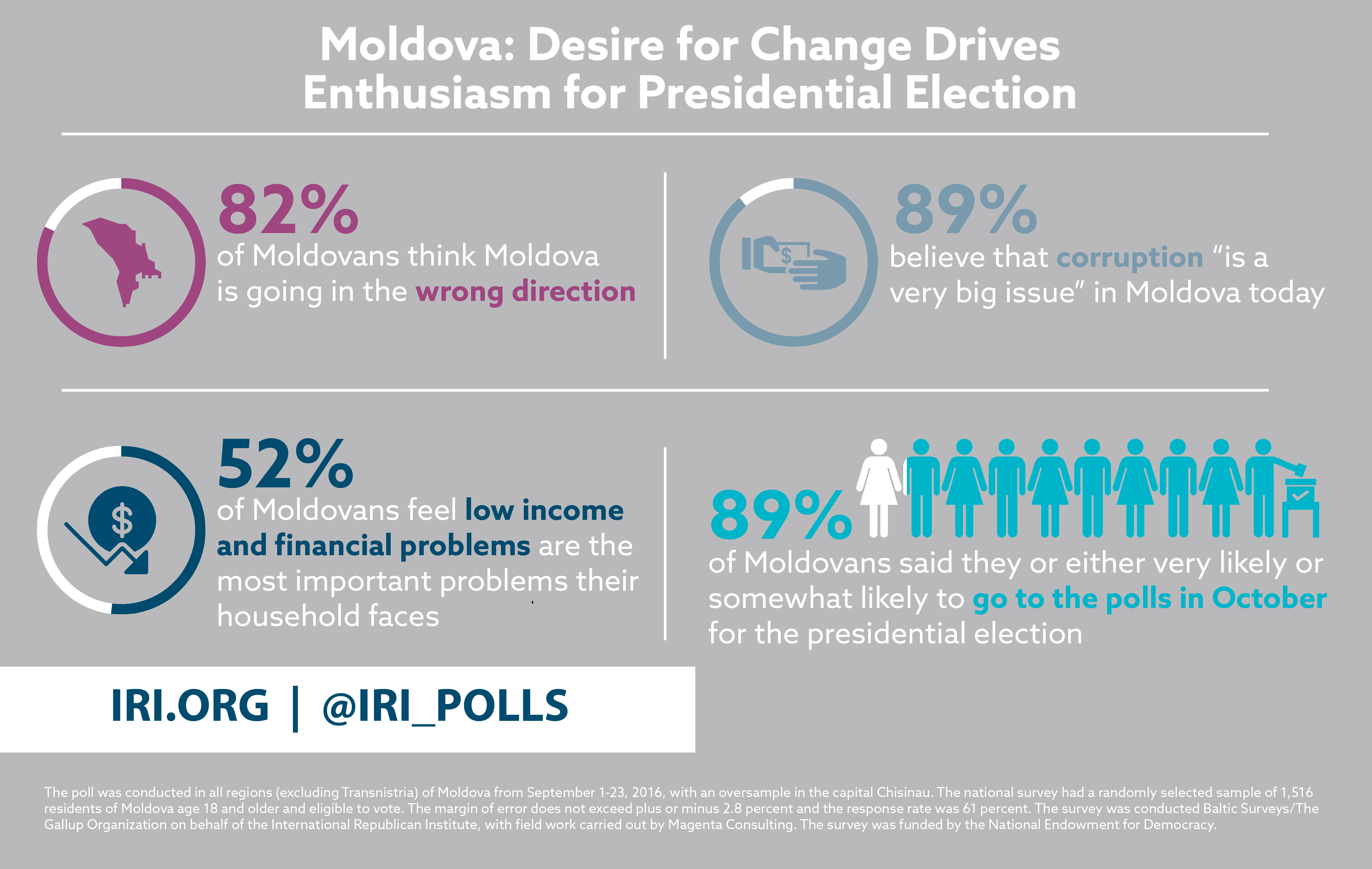 Chișinău, Moldova—A new nationwide poll from Moldova released today by IRI demonstrates an ongoing desire for change and enthusiasm for the upcoming presidential election. The contest, scheduled for October 30, will be the first direct presidential election in the country since 1996.

“This survey shows that Moldovans are enormously dissatisfied with the status quo, particularly in relation to corruption and economic issues,” said Stephen Nix, IRI Regional Director, Eurasia. “The level of excitement over the election indicates that people are investing in this process and want to see change. Whatever the results, the next president will need to rebuild public confidence and address the problems driving the populations’ discontent.”

According to IRI’s poll, 64 percent of Moldovans are “very likely” to vote in the upcoming presidential election, and 25 percent are “somewhat likely” to do so. This appears to be motivated by a strong desire for change: 78 percent expressed the view that Moldovan society needs serious structural and systemic reforms, and 82 percent think the country is going in the wrong direction. This sentiment aligns with the unpopularity of the current parliament (52 percent strongly disapprove; 22 percent somewhat disapprove) and the Filip government (42 percent strongly disapprove; 19 percent somewhat disapprove).

Corruption, cynicism towards the government, and frustration with lingering economic problems appear to be the main drivers of discontent. A staggering 89 percent of respondents cite corruption as a “very big issue” for the country, and 90 percent feel that the government only serves the interests of “some groups.” Sixty-five percent feel that the economic situation has worsened either somewhat (30 percent) or a lot (35 percent), and more than half of respondents identify financial problems as the most important challenge facing their household.

The survey was conducted by Baltic Surveys/The Gallup Organization on behalf of the International Republican Institute, with funding support from the National Endowment for Democracy. The field work was carried out by Magenta Consulting. Data was collected throughout Moldova (with the exception of Transnistria) between September 1 to 23, 2016 through face-to-face interviews at respondents’ homes.

The main sample consisted of 1,516 permanent residents of Moldova older than the age of 18 and eligible to vote. The survey also contained an oversample in the capital of Chisinau. It is representative of the general population by age, gender, education, region and size of the settlement. The margin of error does not exceed plus or minus 2.8 percent, and the response rate was 61 percent.