Baghdad, Iraq – A new nationwide survey of Iraq by the International Republican Institute’s (IRI) Center for Insights in Survey Research reflects widespread pessimism over the country’s future and distrust in its political institutions. Despite the public’s lack of confidence in the government’s ability to represent citizens, the poll also finds that Iraqis continue to value the democratic process.

“Iraqis have a mostly negative outlook for the future of their country. They want their leaders to act more in the interest of all citizens and less out of self-interest,” said IRI Regional Director for the Middle East and North Africa Patricia Karam. “In order to regain public support, political leaders must respond to voter demands and empower newer and younger leaders.”

According to the poll, the majority of Iraqis have a negative outlook toward their country, with 66 percent agreeing that it is headed in the wrong direction and 69 percent believing Iraqi youth do not have a good future.

While 45 percent agree that democracy is the best form of government for Iraq, 77 percent of citizens characterized the current state of democracy as either “very” (52 percent) or “somewhat” bad (25 percent). Confidence in most institutions is very low, with the vast majority distrusting political parties (94 percent), the parliament (83 percent) and the Independent High Election Commission (74 percent) either “somewhat” or “a great deal.”

Although 86 percent of Iraqis believe that their country is governed only in the interest of some groups, 62 percent maintain that it is important to vote and 76 percent are registered to vote. Moreover, of the 36 percent of citizens who think ordinary Iraqis can influence political decision-making, more than one-third believe they can do so through voting. 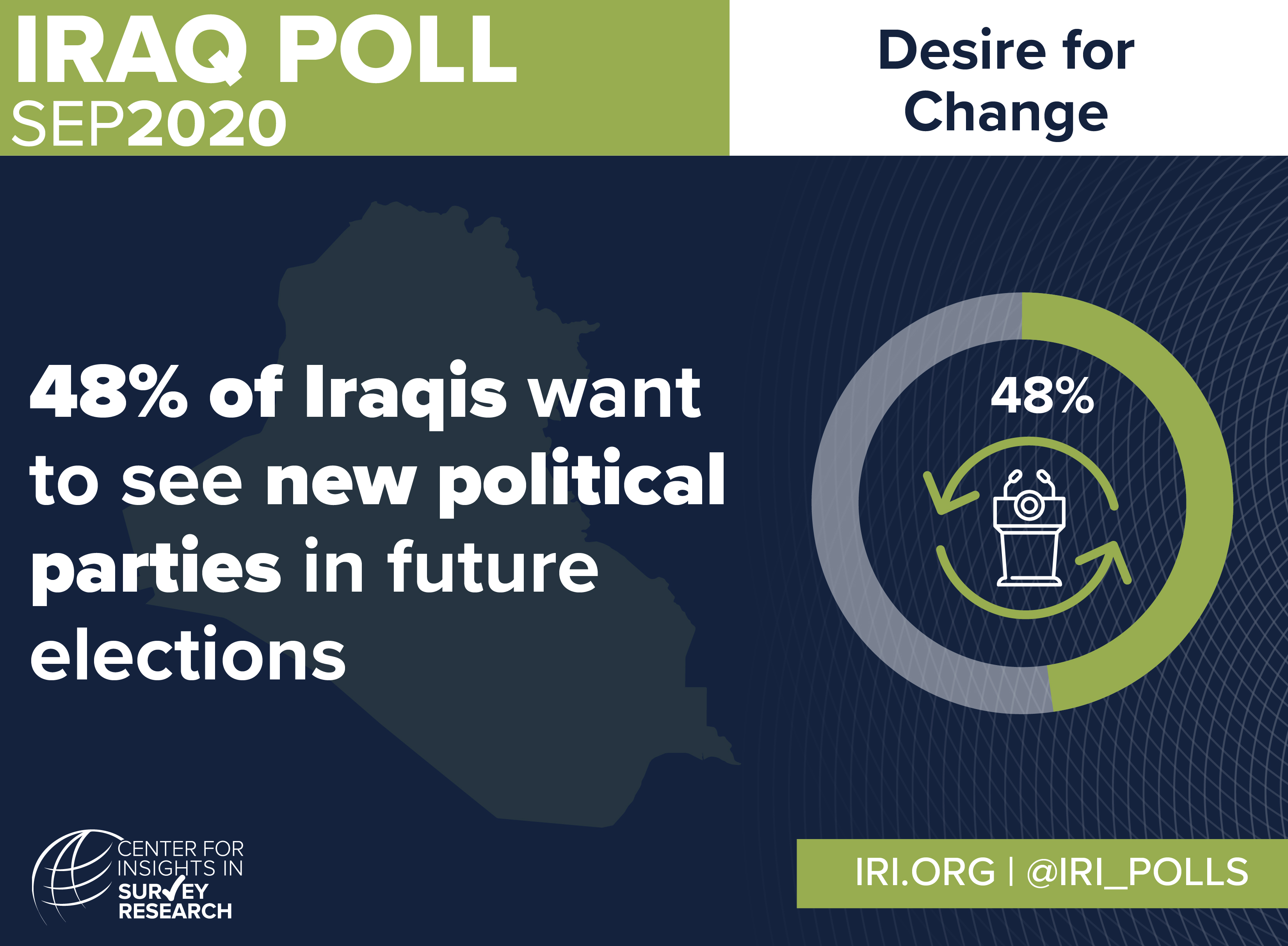 With Iraq’s parliamentary elections scheduled for June 2021, citizens want to see new parties compete (48 percent). Furthermore, a near-majority say that they are more likely to vote for first-time candidates (48 percent) and candidates under 35 (45 percent) – suggesting a desire for fresh approaches to politics.

This survey was conducted on behalf of IRI’s Center for Insights in Survey Research by Al-Mustakilla for Research (IIACSS) between August 28 and September 25, 2020. Data was collected through computer-assisted face-to-face interviews in respondents’ homes, except for in Erbil, where paper questionnaires were used. The national sample consisted of n=3,070 interviews and was supplemented by oversamples in select provinces. The margin of error does not exceed plus or minus 1.5 percent at the 95 percent confidence level and the response rate was 87 percent. This survey was made possible by the generous support of the National Endowment for Democracy.