Kyiv, Ukraine – A new Ukraine poll, released today by IRI, found that, although there are divisions in the country, opposition to Russian military intervention remains high, voters in all regions are looking forward to the upcoming presidential election and, despite the continuing crisis, public confidence in the government remains steady.

Due to Russia’s occupation of the peninsula, residents of Crimea were unable to be included in this poll. 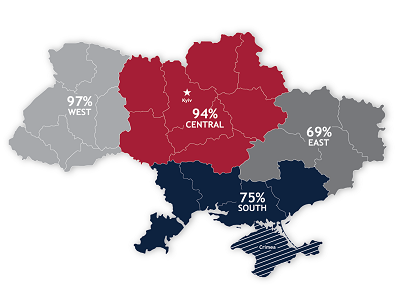 As in IRI’s March poll, more than half of respondents (55 percent) consider military intervention by Moscow to be an invasion and occupation of independent Ukraine.

When asked if it was necessary for the Russian military to come into eastern and/or southern Ukraine to protect Russian speakers and ethnic Russians, an overwhelming majority (88 percent) said no.  That majority was seen across all regions of the country, 98 percent in the west, 95 percent in the center, 73 percent in the east and 86 percent in the south.

Furthermore, 73 percent of respondents believe Ukraine should remain a unitary country governed by a central government.

Although support for Petro Poroshenko has increased from IRI’s March poll, with 29 percent of respondents indicating they would vote him, a second round run-off election seems likely.  Of the other candidates, Yulia Tymoshenko is in second place with 13 percent, Serhiy Tihipko is next with six percent, followed by Mykhailo Dobkin with five percent.  Oleh Lyashko and Petro Symonenko each received four percent.

The presidential election will be critical to stabilizing Ukraine and is clearly something that Moscow does not want.

The current parliament, elected in 2012, which Moscow propaganda would have people believe is an illegal government, maintains a plurality of support.

Respondents continue to support the government’s agenda of strengthening ties to Europe with 53 percent preferring to join the European Union and 54 percent indicated they would vote to join the EU if a referendum were held today.

Methodology
The poll was conducted in all regions of Ukraine (excluding Crimea) from April 3-12, 2014, with a randomly selected sample of 1,200 permanent residents of Ukraine older than the age of 18 and eligible to vote.  The margin of error does not exceed plus or minus 2.8 percent, and the response rate was 65 percent.

The survey was conducted by Baltic Surveys/The Gallup Organization, with field work carried out by Rating Group Ukraine.  The survey was funded by the U.S. Agency for International Development.