New Poll: Jordanians Remain Frustrated with the Economy and Government

Amman, Jordan—The latest nationwide poll of Jordan by the International Republican Institute’s (IRI) Center for Insights in Survey Research reveals continued dissatisfaction with the economy and lack of confidence in the government ahead of the September 2020 parliamentary elections.

“The decade-long decline in confidence in the government and dissatisfaction with the economy poses a real challenge to politicians competing in this year’s parliamentary elections,” said Patricia Karam, IRI Regional Director for the Middle East and North Africa. “It remains to be seen whether the government’s management of the COVID-19 pandemic inspires Jordanians to rally round the state, or whether it exacerbates these frustrations.”

When asked about the economic situation in Jordan a combined 75 percent of citizens described it as “bad” or “very bad”, and 66 percent believe the country is headed in the wrong direction. More than 50 percent of those who would choose a job in the public sector think the private sector is “less stable” than the public sector—with 64 percent preferring public sector jobs for themselves or their family members. Of the 42 percent of Jordanians who have considered emigrating in the past few years, 94 percent cited economic reasons as their motivation. Furthermore, 97 percent of citizens do not earn enough money in Jordan to allow for savings after covering the cost of living essentials. 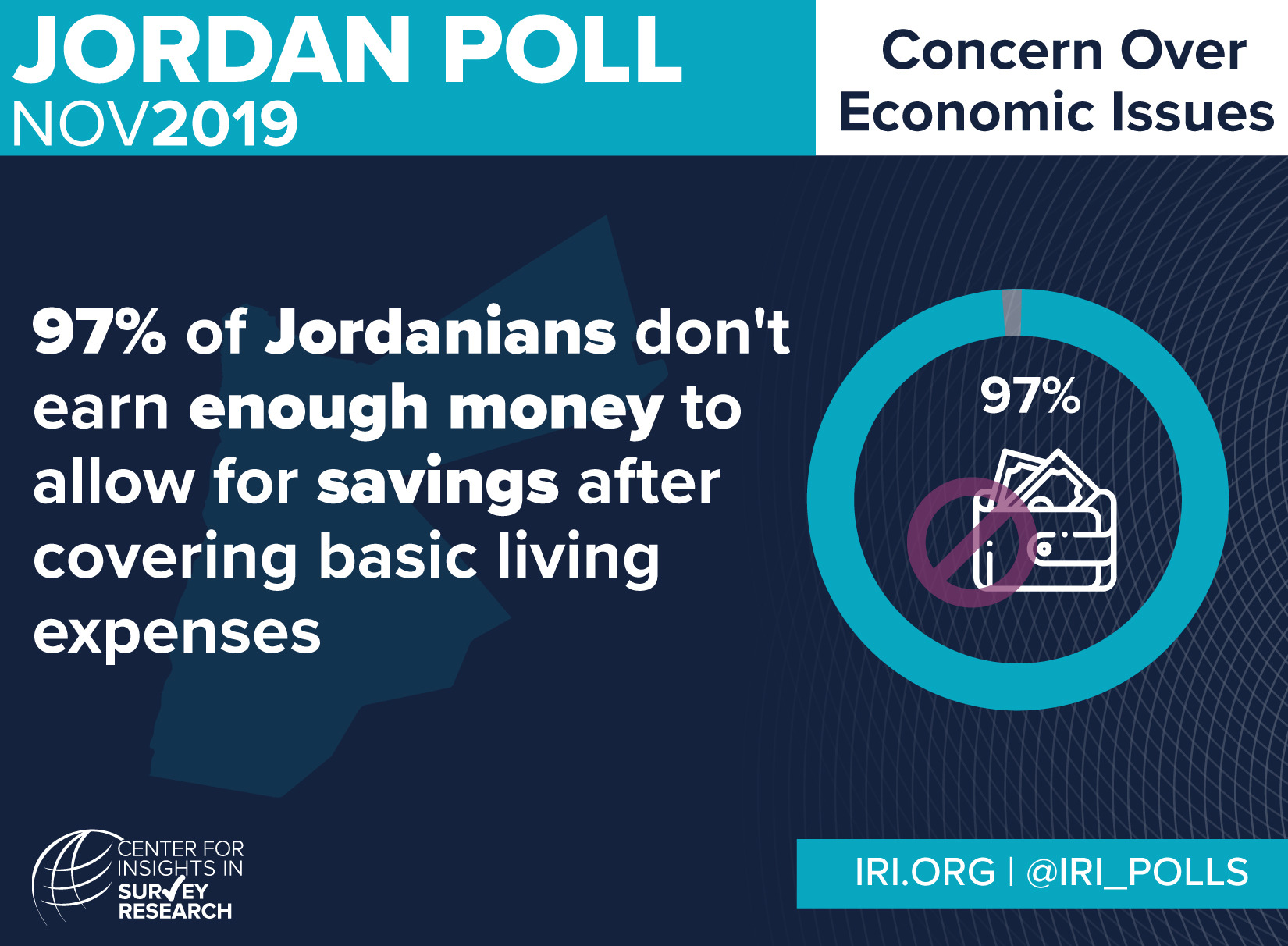 Eighty percent of citizens believe the government is the most responsible for the current economic situation in Jordan, while more than 90 percent say the parliament has failed to achieve any laudable successes in the past year. Looking ahead, 72 percent of citizens reported that they “definitely” or “probably” would not vote if elections were held tomorrow, citing their belief that nothing will change if they do vote (47 percent) and that parliament is not effective (28 percent). More than 80 percent do not believe that Jordan’s elections reflect the will of the people.

This survey was conducted as part of an annual nationwide series, and its findings were collected prior to the spread of the COVID-19 pandemic. IRI plans to conduct an additional survey in Jordan in the summer of 2020 to provide an up-to-date picture of the situation on the ground.

The survey was conducted on behalf of IRI’s Center for Insights in Survey Research by NAMA Strategic Intelligence Solutions between November 14 and 22, 2019. Data was collected using a stratified cluster proportional to size sampling method through face-to-face interviews with Jordanians aged 18 and above. The data was weighted to reflect the actual distribution of the population. The margin of error is plus or minus 2.5 percent at the midrange of the 95 percent confidence level. The response rate was 78 percent. The survey was made possible by the generous support of the American people through the United States Agency for International Development (USAID).