As a partial leadership transition takes place in Cuba on April 19, IRI’s most recent survey provides rare data on a unique sector of society: self-employed Cubans, also known as cuentapropistas (literally someone who works for “their own account”).

While their numbers have grown significantly in recent years due to the state’s increasing inability to provide employment, information on cuentapropistas remains mostly anecdotal. The first of its kind in Cuba, this survey seeks to provide a more nuanced understanding of who they are, how they operate, and their outlook.

Since seizing private businesses in the 1960s, the Castro regime has permitted limited self-employment during brief periods that usually coincided with economic crises––for example, during the “Special Period,” when the collapsing Soviet Union withdrew the subsidies that had previously kept Cuba afloat.

In 2010, the Castro regime allowed the cuentapropista sector to expand to 201 licensed occupations, ranging from doll repair and food preparation to taxi driving and cosmetology. Most of these positions are low-skill jobs and none are in manufacturing or industry. The number of licensed cuentapropistas expanded to about 580,000 in 2017 in response to increasing financial pressures. These small businesses are heavily taxed and regulated, and many Cubans (especially dissidents) are unable to receive licenses. (Since informal employment is so prominent in Cuba’s economy, IRI applied a broad interpretation of the term cuentapropista and included unlicensed individuals in the sample.)

Many international observers believe that economic change will yield broader political change in Cuba, and expect small business to play a key role in that process. Yet to describe these individuals as “small business owners” mischaracterizes the true nature of most cuentapropistas, persons simply licensed to work on their own.

Small, fragile, and highly informal, cuentapropistas have few employees (more than 60 percent of surveyed businesses consist of just one or two people) and the majority (55 percent) have started only in the last four years. Most surveyed (60 percent) either claimed not to know what they earn or did not report earnings, which could be an indicator of poor tracking of incomes, or a tendency to underreport due to Cuba’s punitive tax regimen.

At least one in five cuentapropistas operates without a license—that is to say, informally. Since independent trade or professional associations are illegal, very few (17 percent) cuentapropistas belong to any such organizations, and a majority (72 percent) are not part of any work-associated organization. Most cuentapropistas (70 percent) say their primary clientele consists of foreign travelers (who pay in hard currency); just 28 percent sell to other Cubans (who are more likely to pay in Cuban pesos). Forty percent get their materials and supplies from government retail stores, where stocks are uncertain and expensive, and 21 percent buy from the black market.

What does this new sector want? The survey indicates that cuentapropistas want lower taxes, more access to the internet, fewer inspections, access to credit and financing, and easier access to licenses. As Cuba undertakes its leadership transition, its actions toward this emerging sector will be a key indicator of the regime’s openness to economic change. 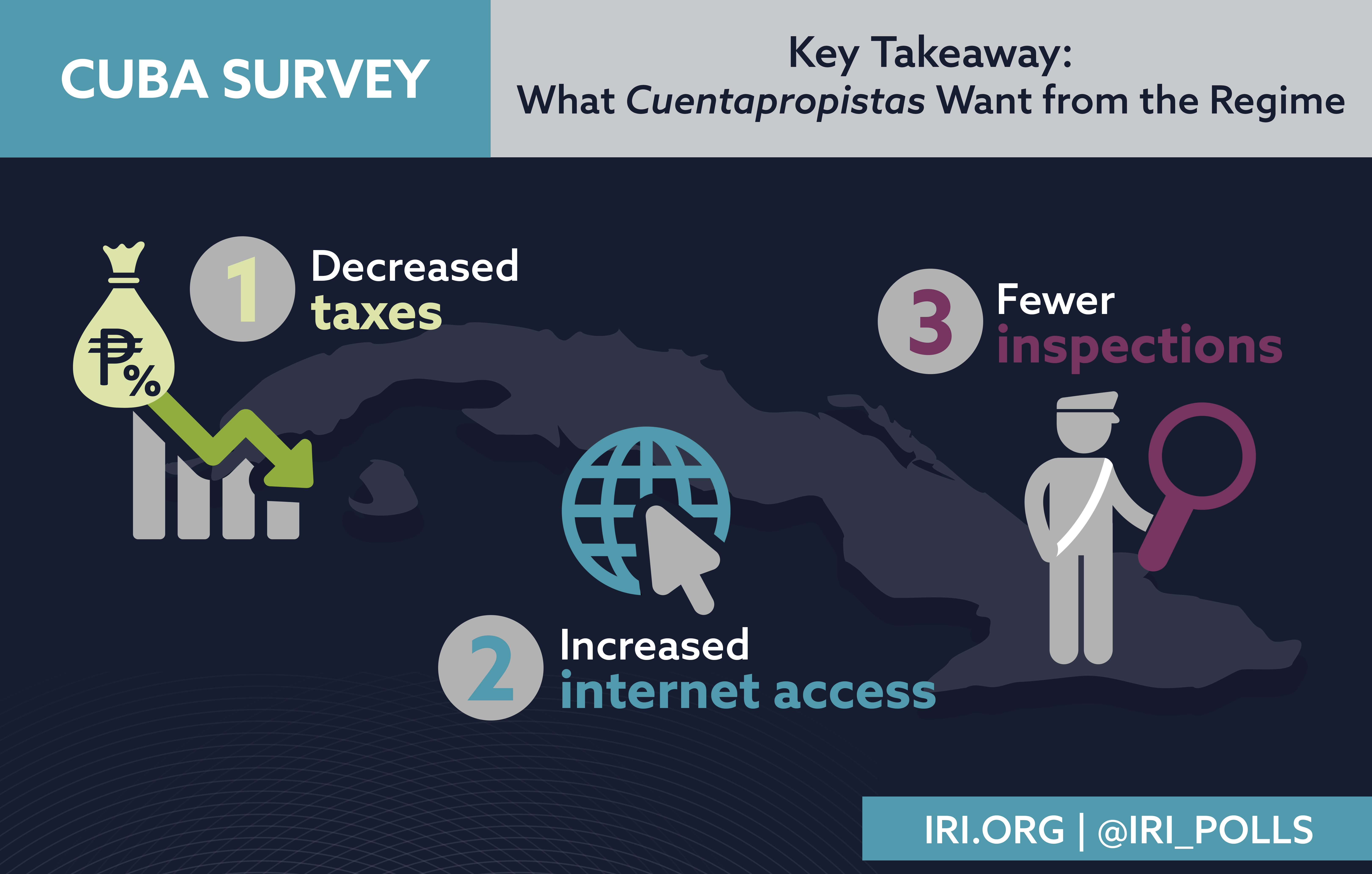