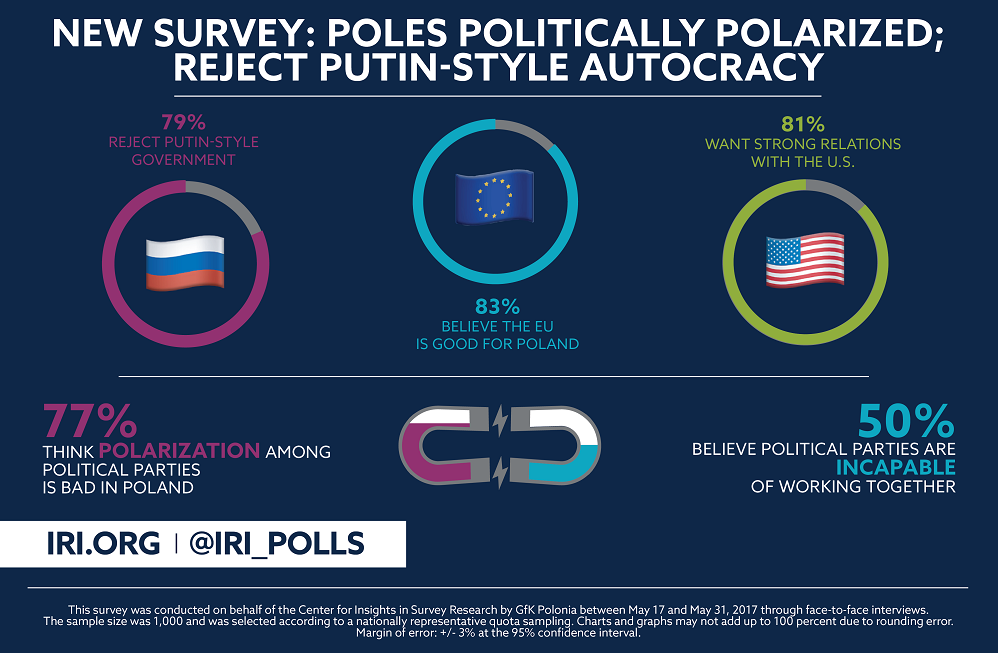 Washington, D.C.—A poll of residents of Poland released today by the International Republican Institute’s (IRI) Center for Insights in Survey Research reveals continued support for Western alliances and a rejection of authoritarian models of government, as well as concerns about the effects of heightened polarization on Poland’s democracy.

“At this highly divisive time in Polish politics, it is encouraging to note that the country has not proven vulnerable to Russian influence, and remains steadfastly committed to European institutions,” said Jan Surotchak, IRI Regional Director for Europe. “However, in order to prevent further polarization and divergence from the path to democracy, it is vital that the government take constructive steps to address the issues dividing citizens and driving political discontent.”

Forty-one percent of respondents think that the political situation in Poland is becoming more polarized, compared to just 17 percent who see the country moving towards increased consensus. Seventy-seven percent of respondents who think Polish politics are moving towards more polarization feel that the polarization of political parties is “a bad thing.” Fifty percent say that the political parties are incapable of working together under any circumstances.

The survey also reflects a high degree of support for transatlantic alliances and institutions. Eighty-three percent believe that the European Union is good for Poland and a combined 81 percent (32 percent “strongly,” 49 percent “somewhat”) agree that Poland’s interests are best served by maintaining strong relations with the United States. A combined 79 percent (57 percent “strongly,” 22 percent “somewhat”) disagree with the proposition that Vladimir Putin’s style of government should be applied in Poland.

Corruption, economic problems and the impact of mass migration emerged as key anxieties in this survey. A combined 73 percent feel that corruption is either “very” (20 percent) or “somewhat” (53 percent) widespread in Polish politics. When asked to name the most urgent problem facing the country, immigrants/refugees/foreigners, unemployment and the low standard of living ranked as the top issues of concern.

Methodology
This survey was conducted on behalf of the Center for Insights in Survey Research by GfK Polonia between May 17 and May 31, 2017 through face-to-face interviews. The sample size was 1,000 and was selected according to a nationally representative quota sampling.  Charts and graphs may not add up to 100 percent due to rounding error. The margin of error is plus or minus 3 percent wth a confidence level of 95 percent.