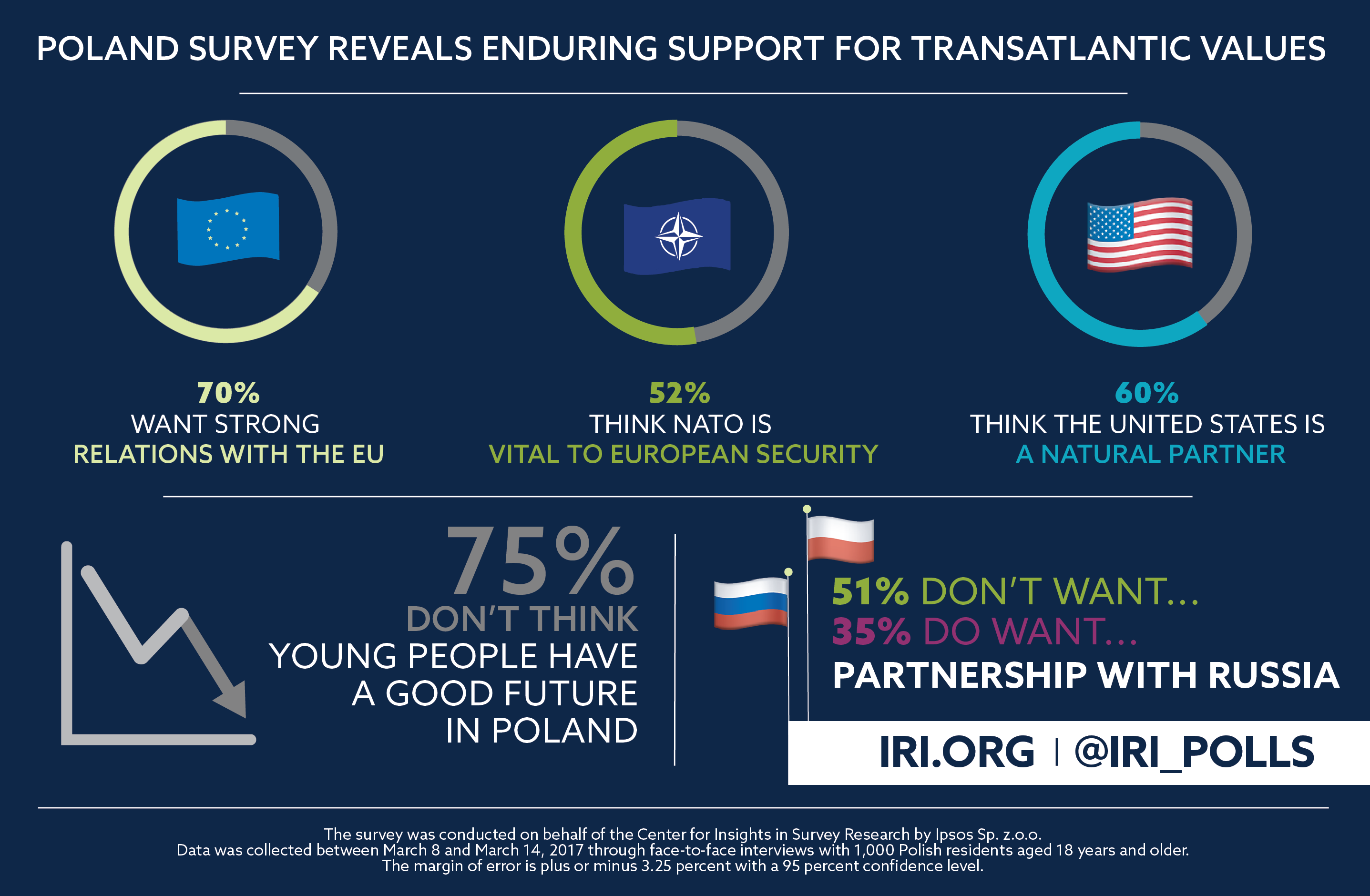 Washington, D.C.—A poll of residents of Poland released today by the International Republican Institute’s (IRI) Center for Insights in Survey Research reveals high levels of support for transatlantic institutions, as well as concerns for the country’s trajectory and threats to Europe’s peace. The poll is the fourth in a series by IRI’s Beacon Project, an initiative dedicated to documenting and countering Russia’s soft power grab in Europe.

“Even in the midst of ongoing debate in Poland about independence of the judiciary, our poll indicates that decades of investment in securing the country’s democracy and European integration have paid off,” said IRI Regional Director for Europe Jan Surotchak. “In contrast to some of the more disturbing vulnerabilities to Russian influence we’ve seen in other surveys of the Visegrad Four countries, Poland remains solidly committed to transatlantic institutions, and appears to be less susceptible to Russian influence—underscoring the importance of continued engagement with this critical region.”

Levels of support among Poles for NATO, the European Union and a strong alliance with the United States was higher than IRI’s polls in Slovakia, the Czech Republic and Hungary. More than half (52 percent) believe that NATO is “vital” to maintaining “peace and security” in Europe, and see Russia as an external threat (51 percent). Sixty-eight percent think the peace of Europe is under threat from terrorism, a resurgent Russia and increased migration. Seventy percent of respondents agree (38 percent strongly; 32 percent somewhat) that Poland’s interests are best served by maintaining strong relations with the European Union, and 60 percent believe the United States is a natural partner for European security.

More troubling, when questioned about the national context, an overwhelming majority (75 percent) of Poles said they do not think young people in Poland have a good future. Additionally, 73 percent do not think that politicians listen to young people, and 57 percent think the country is headed is the wrong direction.

“Clearly, Poland’s political leadership, both government and opposition, must address the sense of pessimism over the country’s future prospects,” said Surotchak. “The future of a strong, united Europe depends on governments taking action to address citizen concerns through robust democratic institutions.”

The survey was conducted on behalf of the Center for Insights in Survey Research by Ipsos Sp. z.o.o. Data was collected between March 8 and March 14, 2017 through face-to-face interviews with 1,000 Polish residents aged 18 years and older. The margin of error is plus or minus 3.25 percent with a 95 percent confidence level. Figures in charts and tables may not add up to 100 percent due to rounding error and/or multiple choice answers.