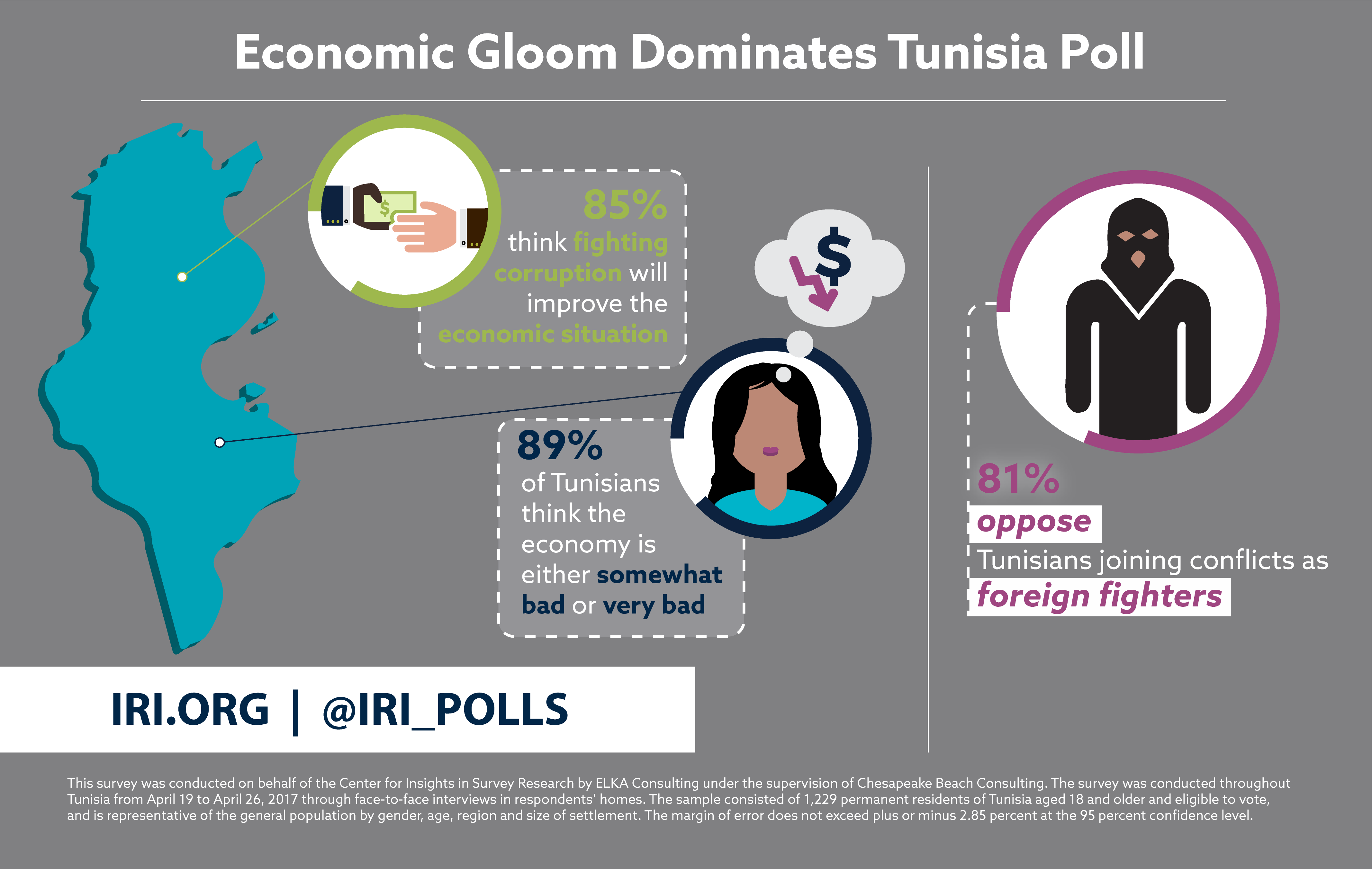 Tunis, Tunisia—A new poll by the International Republican Institute’s (IRI) Center for Insights in Survey Research shows popular perceptions of the economy at an all-time low amid continued fears for the future of the country.

“This survey reflects mounting frustration over Tunisia’s economic situation and persistent pessimism over the country’s trajectory,” said Scott Mastic, IRI Regional Director for the Middle East and North Africa. “It is crucial that the government take steps to address obstacles to economic growth and restore confidence in the government’s ability to build a better future for Tunisia.”

A combined 89 percent of Tunisians describe the economy as either “very bad” (63 percent) or “somewhat bad” (26 percent). When asked about the best way to improve the economy, 85 percent cited fighting corruption and bribery as a “very good” option.

Dissatisfaction with the government is higher than ever, with a combined 68 percent rating the government’s performance as either “very bad” (41 percent) or “somewhat bad” (27 percent). In addition, an overwhelming majority (83 percent) feel that the country is headed in the wrong direction, a figure which matches the historical high figure recorded in previous polls by IRI.

When questioned about the high proportion of Tunisians who have left the country to fight as militants in Libya, Syria and Iraq, a clear majority (81 percent) affirmed that Tunisians should not engage in violent conflicts in other Muslim countries. When asked how the government should treat foreign fighters who return to Tunisia, 25 percent advocate deportation; 18 percent say they should be subject to criminal trial; 15 percent favor imprisonment; and 15 percent want rehabilitation and reintegration into society.

“It is encouraging to note that, despite the concerning number of Tunisians leaving to fight with terrorist groups like ISIS, the vast majority does not support these activities,” said Mastic. “However, recent qualitative research conducted by IRI in Beja, Tunisia indicates that the disaffection reflected in this poll can exacerbate vulnerabilities to extremism within the population. This should be a cause of particular concern to the national Tunisian government.”

This survey was conducted on behalf of the Center for Insights in Survey Research by Tunisian-owned and operated marketing research firm ELKA Consulting under the supervision of Chesapeake Beach Consulting. Data was collected from April 19 to 26, 2017 through face-to-face interviews. The sample consisted of 1,229 Tunisians aged 18 and older. The overall margin of error is plus or minus 2.85 percent at the midrange of the 95 percent confidence level. Figures in charts and tables may not add up to 100 percent due to rounding.