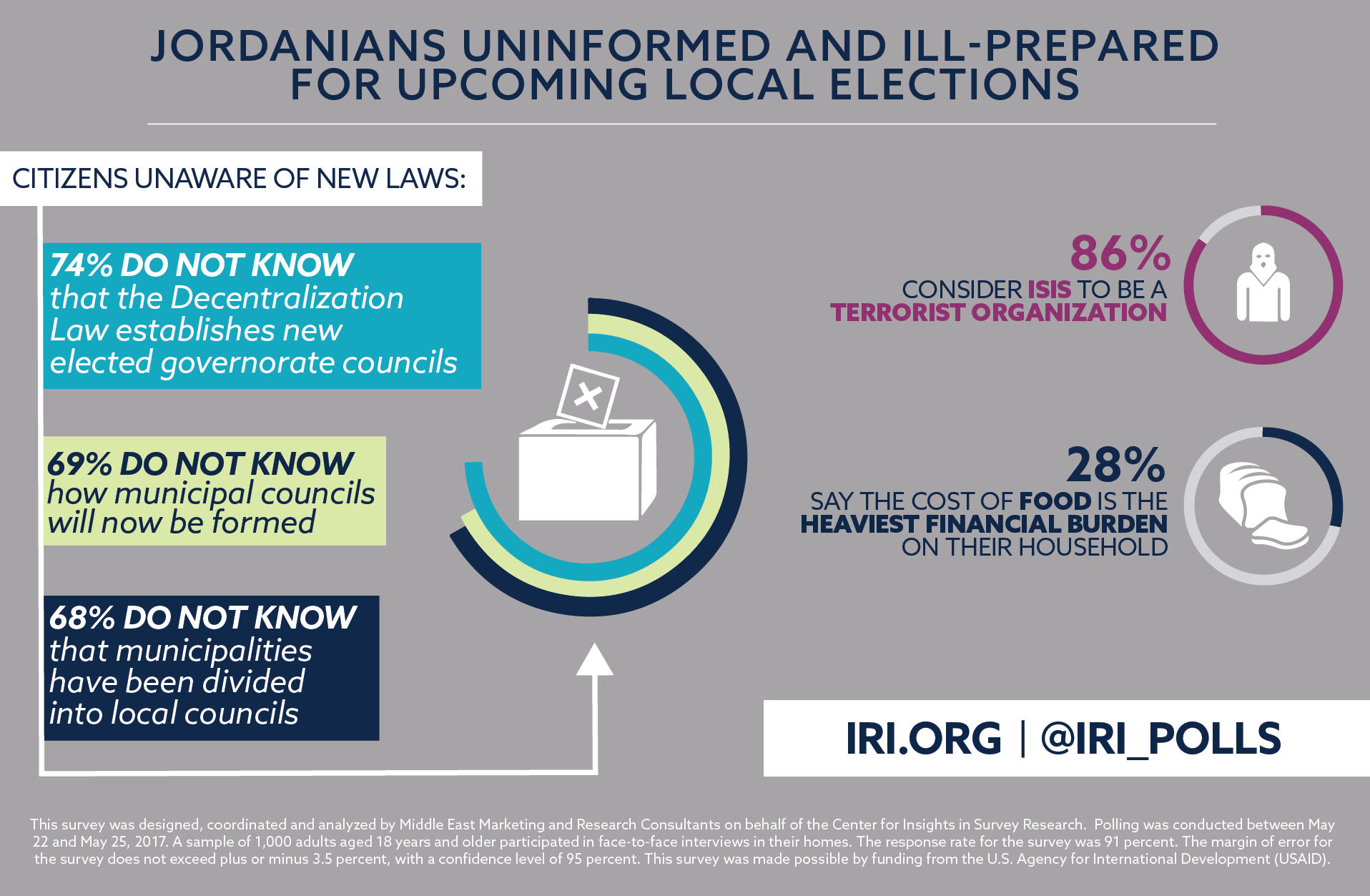 Amman, Jordan—A survey of residents of Jordan released today by the International Republican Institute’s (IRI) Center for Insights in Survey Research reveals that a majority of Jordanians are unaware of the decentralization reforms that will be rolled out in local elections on August 15, 2017.

“This survey indicates a worrying lack of understanding of the institutional changes that will be implemented in the upcoming local elections, and suggests that Jordanians are also under increasing economic pressure,” said IRI Resident Program Director for Jordan Ramsey Day. “If the government is to achieve any positive change with these reforms, it is vital that it take steps to educate the public and demonstrate its responsiveness to citizen concerns both before and after the elections.”

As local elections draw near, 68 percent of respondents do not know that municipalities have been divided into a number of elected local councils according to the new Municipalities Law, and 74 percent are unaware that the Decentralization Law will establish new elected governorate councils. Seventy-one percent do not know what the main purpose of decentralization is, and 67 percent are unaware that the elections for mayors, local councils and governorate councils will be held on separate ballots.

This survey also suggests that the under-performing economy is starting to have a greater impact on Jordanian citizens. Just 22 percent of Jordanians describe the economic situation as “good” (20 percent) or “very good” (2 percent), continuing a downward trend from a high of 49 percent (46 percent “good,” 3 percent “very good”) in 2015. This economic fatigue appears to be hitting close to home, with 28 percent reporting that food is the heaviest burden on their household budget, followed by electricity at 22 percent.

Consistent with previous polls, Jordanians continue to take a negative view of the influx of Syrian refugees, with 56 percent supporting border closures and 29 percent advocating limits on the number of refugees accepted.  Attitudes towards ISIS remain overwhelmingly negative, with 86 percent characterizing the entity as a terrorist organization.

This survey was designed, coordinated and analyzed by Middle East Marketing and Research Consultants on behalf of the Center for Insights in Survey Research. Polling was conducted between May 22 and May 25, 2017. A sample of 1,000 adults aged 18 years and older participated in face-to-face interviews in their homes. The response rate for the survey was 91 percent. The margin of error for the survey does not exceed plus or minus 3.5 percent, with a confidence level of 95 percent. Figures in charts and graphs may not add up to 100 percent due to rounding. This survey was made possible by funding from the U.S. Agency for International Development (USAID).