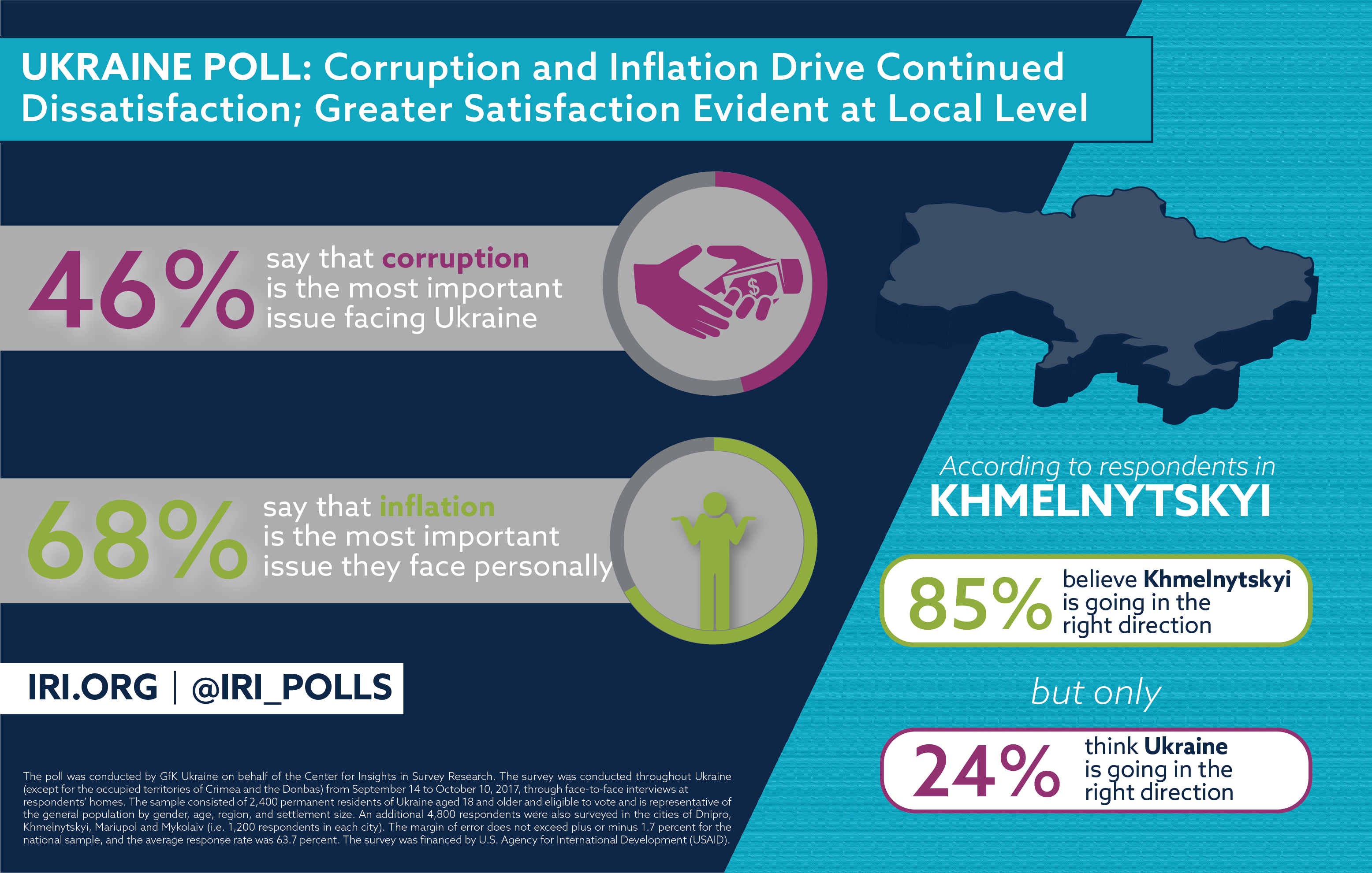 Kyiv, Ukraine—A nationwide poll of Ukraine by the International Republican Institute’s (IRI) Center for Insights in Survey Research reveals continued dissatisfaction with the country’s trajectory and concerns over the prevalence of inflation and corruption.

“This poll confirms the trend we have seen in previous IRI surveys of high levels of dissatisfaction at the national level, apparently tied to frustration with corruption and economic conditions,” said IRI Regional Director for Eurasia Stephen Nix. “The relatively high levels of satisfaction at the local level suggests that decentralization reforms are having a beneficial effect, particularly due to communities’ greater control over financial resources. It is critical to preserve these achievements.”

Consistent with previous IRI polling, the survey revealed a distinct gap between satisfaction on the national level and the local level. For example, in the city of Khmelnytskyi, only 24 percent are optimistic about the trajectory of Ukraine, but a striking 85 percent believe their city is headed in the right direction and 77 percent are “proud” of their city.

The poll also indicates that the judicial system is distinctly unpopular in Ukraine. A combined 82 percent either strongly disapprove (53 percent) or somewhat disapprove (29 percent) of the judicial system. “The data suggests that Ukraine is in dire need of judicial reform,” said Nix. “It is vital that the national government take steps to implement a mechanism such as an independent anti-corruption court or work to secure the independence of existing anti-corruption bodies.”

The poll was conducted by GfK Ukraine on behalf of the Center for Insights in Survey Research. The survey was conducted throughout Ukraine (except for the occupied territories of Crimea and the Donbas) from September 14 to October 10, 2017 through face-to-face interviews at respondents’ homes.

The sample consisted of 2,400 permanent residents of Ukraine aged 18 and older and eligible to vote and is representative of the general population by gender, age, region, and settlement size. An additional 4,800 respondents were also surveyed in the cities of Dnipro, Khmelnytskyi, Mariupol and Mykolaiv (i.e. 1,200 respondents in each city). The margin of error does not exceed plus or minus 1.7 percent for the national sample, and the average response rate was 63.7 percent. The survey was financed by U.S. Agency for International Development (USAID).