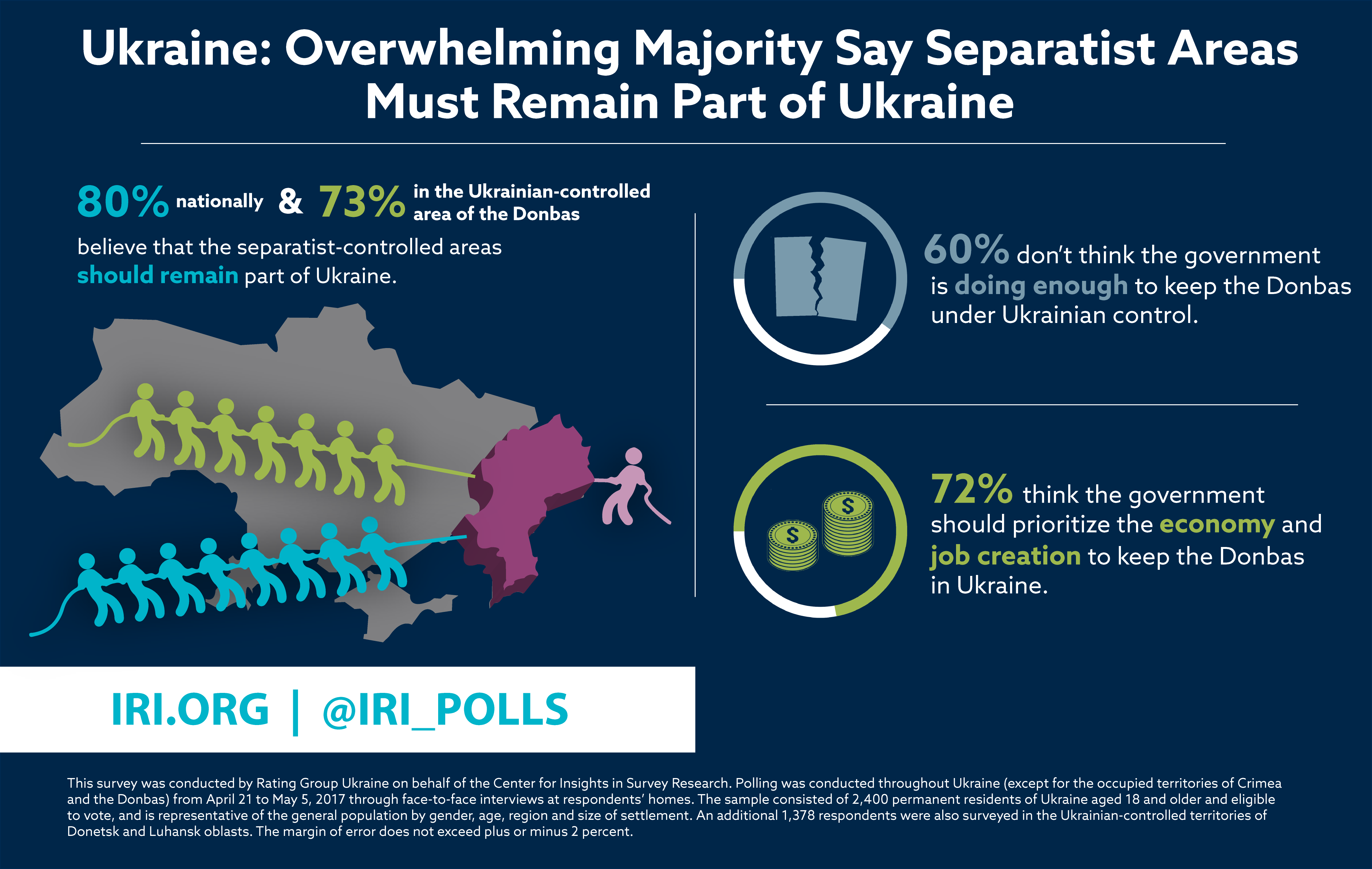 Kyiv, Ukraine—A new poll by the International Republican Institute’s (IRI) Center for Insights in Survey Research reveals that an overwhelming majority of Ukrainians think the war-torn Donbas region should remain part of Ukraine. The survey contained an over-sample of respondents from the Ukrainian-controlled areas of the Donbas, a majority of whom also affirmed their wish for the entire region to stay in Ukraine.

“Three years into the ongoing conflict in eastern Ukraine, which has claimed the lives of 10,000 and displaced more than 1.7 million people, Ukrainians are resolute in their desire to restore their territorial integrity and their rejection of the illegal occupation by Russian-backed separatists,” said IRI Regional Director for Eurasia Stephen Nix. “This data is critical, as it suggests that the Ukrainian people will not accept the division of their country.”

Despite this consensus on the future of the Donbas, a combined 60 percent of those surveyed in the Donbas do not feel that the government is taking sufficient steps to retain control of the liberated areas of the region. Only a combined 10 percent in the Donbas believe the authorities are doing enough—a 14 percent decrease since IRI’s previous oversample of the region in November 2015.

Seventy-two percent of Donbas residents cited job creation and economic improvements as the best ways to keep the Donbas part of Ukraine. “This represents a clear call to action for Ukrainian authorities,” Nix said. “Citizens in the Donbas must be made to feel that they can expect to enjoy a more stable and prosperous future as part of Ukraine. Improving the quality of life of citizens will yield greater stability for the region in the long term.”

This survey was conducted by Rating Group Ukraine on behalf of the Center for Insights in Survey Research. Polling was conducted throughout Ukraine (except for the occupied territories of Crimea and the Donbas) from April 21 to May 5, 2017 through face-to-face interviews at respondents’ homes. The sample consisted of 2,400 permanent residents of Ukraine aged 18 and older and eligible to vote, and is representative of the general population by gender, age, region and size of settlement. An additional 1,378 respondents were also surveyed in the Ukrainian-controlled territories of Donetsk and Luhansk oblasts.

The margin of error does not exceed plus or minus 2 percent. The average response rate was 64.2 percent. Charts and graphs may not add up to 100 percent due to rounding. This survey was funded by the Government of Canada.