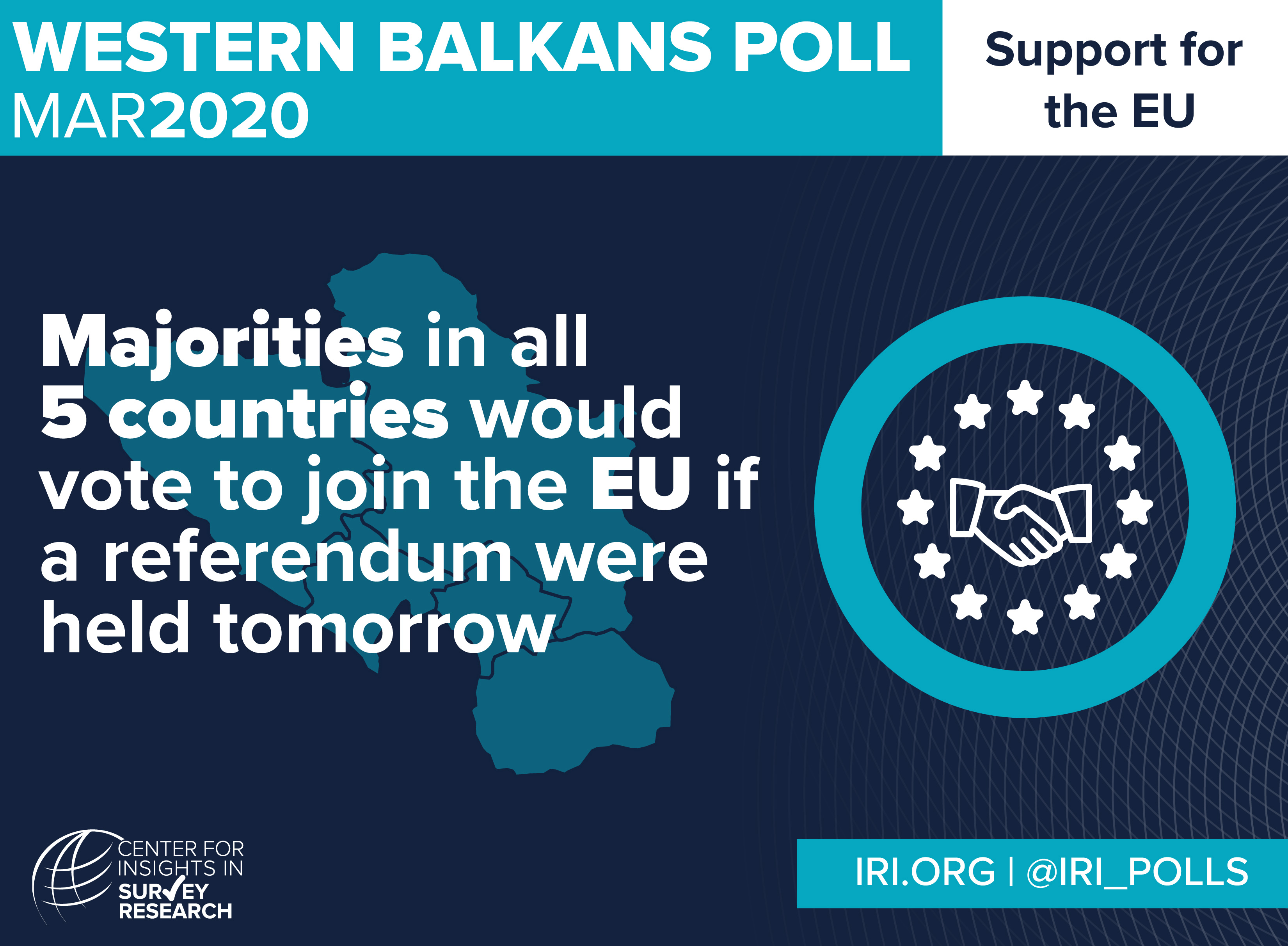 Washington, D.C. – The latest multinational survey of the Western Balkans by the International Republican Institute’s (IRI) Center for Insights in Survey Research (CISR) reveals split opinions of the United States as an economic and political partner, but also enthusiasm for stronger ties with the European Union (EU). The countries surveyed were Bosnia and Herzegovina (BiH), Kosovo, North Macedonia, Montenegro and Serbia.

“Despite China and Russia’s best efforts to exert influence in the Western Balkans, this poll shows that many in the region see their interests as lying with the West,” said IRI Regional Director for Europe Paul McCarthy. “Continued support from the U.S. and EU in bolstering democracy across the region is crucial to consolidating this positive trend and enabling these countries to resist encroachment by authoritarian powers.”

When asked which nations are the most important economic partners, the public was split in their response, with a supermajority (94 percent) in Kosovo citing the United States, compared to just 13 percent in Serbia sharing this sentiment. A strong majority in Serbia named Russia (73 percent) and China (71 percent) among the most important economic partners.

Along the same lines, majorities in Kosovo and North Macedonia consider the U.S. among their countries’ most important political partners, as does a plurality in Montenegro. In BiH and in Serbia, the share of those who see the U.S. as a key political partner is lower (29 percent and 15 percent respectively).

Enthusiasm for EU membership also remains high: When asked how they would vote if a referendum were held tomorrow, majorities in all countries said they would vote in favor of EU integration. In Kosovo, an overwhelming majority (93 percent) support accession, and strong majorities in BiH (76 percent) and North Macedonia (74 percent) would also vote to join the EU. 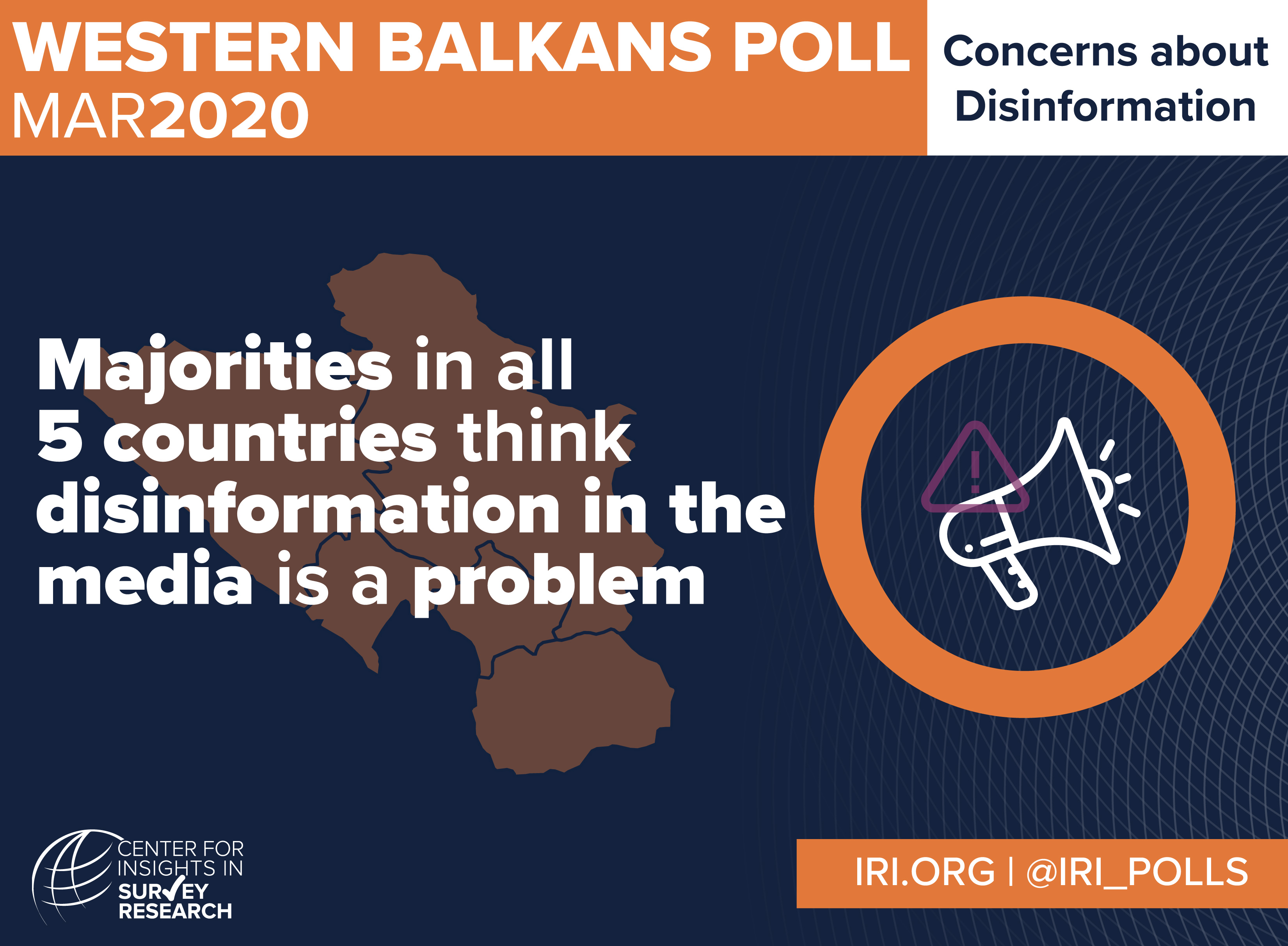 Despite these positive findings, concern about disinformation was also evident across the five countries surveyed, indicating that false narratives frequently pushed by malign actors are a continuing problem in the Western Balkans. Majorities in BiH, Kosovo, North Macedonia, Montenegro and Serbia agreed that misleading or false information in the media is either “very” or “somewhat” problematic for their countries. Furthermore, majorities in all five countries said that they encounter misleading or false information in the media either “daily,” “almost daily” or “several times a week.”

“With much of the disinformation circulating in the Balkans emanating from authoritarian powers like China and Russia, it is reassuring that citizens of the Balkans recognize the problems posed by this phenomenon,” said McCarthy. “The COVID-19 pandemic has made access to trustworthy information more important than ever – underscoring the vital importance of countering disinformation in the Balkans and globally.”

The survey was conducted on behalf of IRI’s Center for Insights in Survey Research by Ipsos Bosnia and Herzegovina between February 2 and March 6, 2020. Data was collected through in-home, in-person interviews in each of the sampled countries with response rates ranging from 50 percent to 85 percent using multistage stratification proportionate to population distribution. Sample size by country varies between n=966 and n=1,517 and the margin of error ranges from 2.5 to 3.2 points. The survey was made possible by the National Endowment for Democracy (NED).