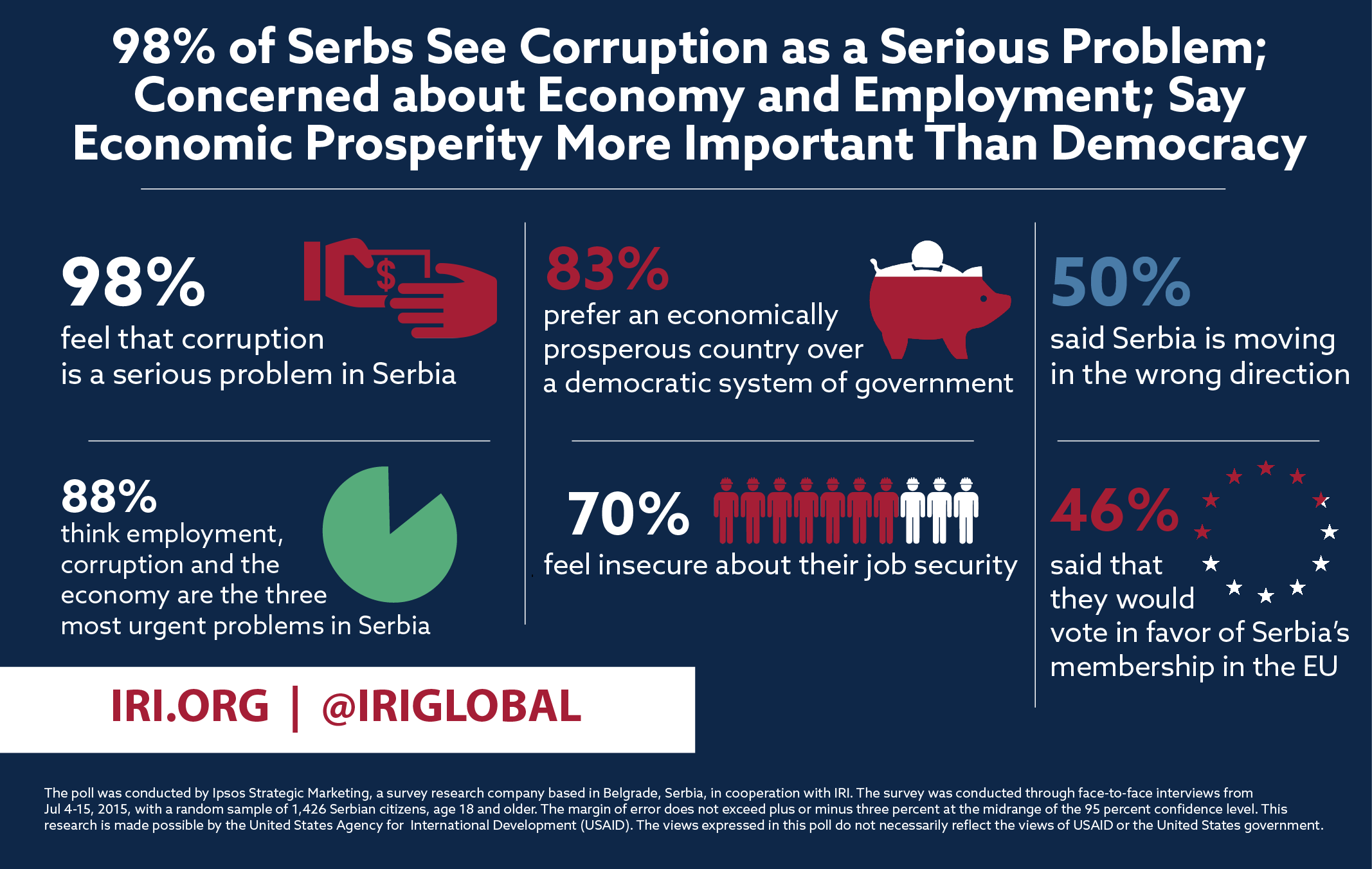 Belgrade, Serbia – Serbs are very concerned about the overall direction of their country, particularly with regard to corruption, the economy and job security, according to a new poll released by IRI.  The poll also reveals that, if given a choice, the vast majority of Serbs say that economic prosperity is more important than democracy.

The poll shows that less than half would vote for European Union (EU) membership while a majority of Serbs indicated a desire for a strong leader as opposed to one who would govern in a more democratic manner.

Concern for Economy and Corruption Leads to Overall Pessimism
Half of all Serbs interviewed thought that the country was headed in the wrong direction (50 percent wrong direction, 38 right direction).  The state of the economy and perceived ineffective attempts to curb corruption were the main drivers of this pessimism.

Growing economic insecurity poses a major threat to fragile democratic institutions in Serbia that are in need of support to ensure accountability, transparency and dialogue between civil society and elected officials.

Asked which would be more important if they could have only one or the other, 83 percent of respondents said that a prosperous economy is more important than a democratic system of government.  As concerning, 60 percent of Serbs would vote for a strong leader over one who would democratically distribute power.

A new law aimed at creating jobs is not perceived to be yielding the promised results; 70 percent of those interviewed felt insecure about their job security, and 51 percent reported that the situation regarding job security is getting worse.

“Serbs are clearly worried about the direction of their country and expect their government to institute much needed economic and institutional reform,” said Jan Surotchak, IRI regional director for Europe.  “In order to ensure stability and move past these problems, all pillars of democracy must be embraced, including strengthening of an active and viable opposition.  Serbia’s leaders must work to strengthen the economy, ensure press freedoms and improve the quality of life for all citizens.”

Support for European Union Membership on the Decline
While the majority of Serbs support Serbia’s membership in the EU, overall support is declining.  Seventy-six percent supported membership in October 2009 compared to just 54 percent in July 2015, a 22 percent drop.  Only 46 percent of people interviewed said that they would vote in favor of Serbia’s membership if a referendum were held today, a decrease of 18 percent from IRI’s April 2011 poll.  This is perhaps due to doubts that Serbia would be able to achieve the changes necessary in order to secure membership.  Forty-seven percent of respondents felt that Serbia must undergo major reforms if it wishes to enter the EU.

Methodology
The poll was conducted by Ipsos Market Research, a survey research company based in Belgrade, Serbia, in cooperation with IRI.  The survey was conducted through face-to-face interviews from July 4-15, 2015, with a random sample of 1,426 Serbian citizens, age 18 and older.  The margin of error does not exceed plus or minus three percent at the midrange of the 95 percent confidence level.

This research is made possible by the generous support of the American people through the United States Agency for International Development (USAID).  The views expressed in this press release do not necessarily reflect the views of USAID or the United States government.