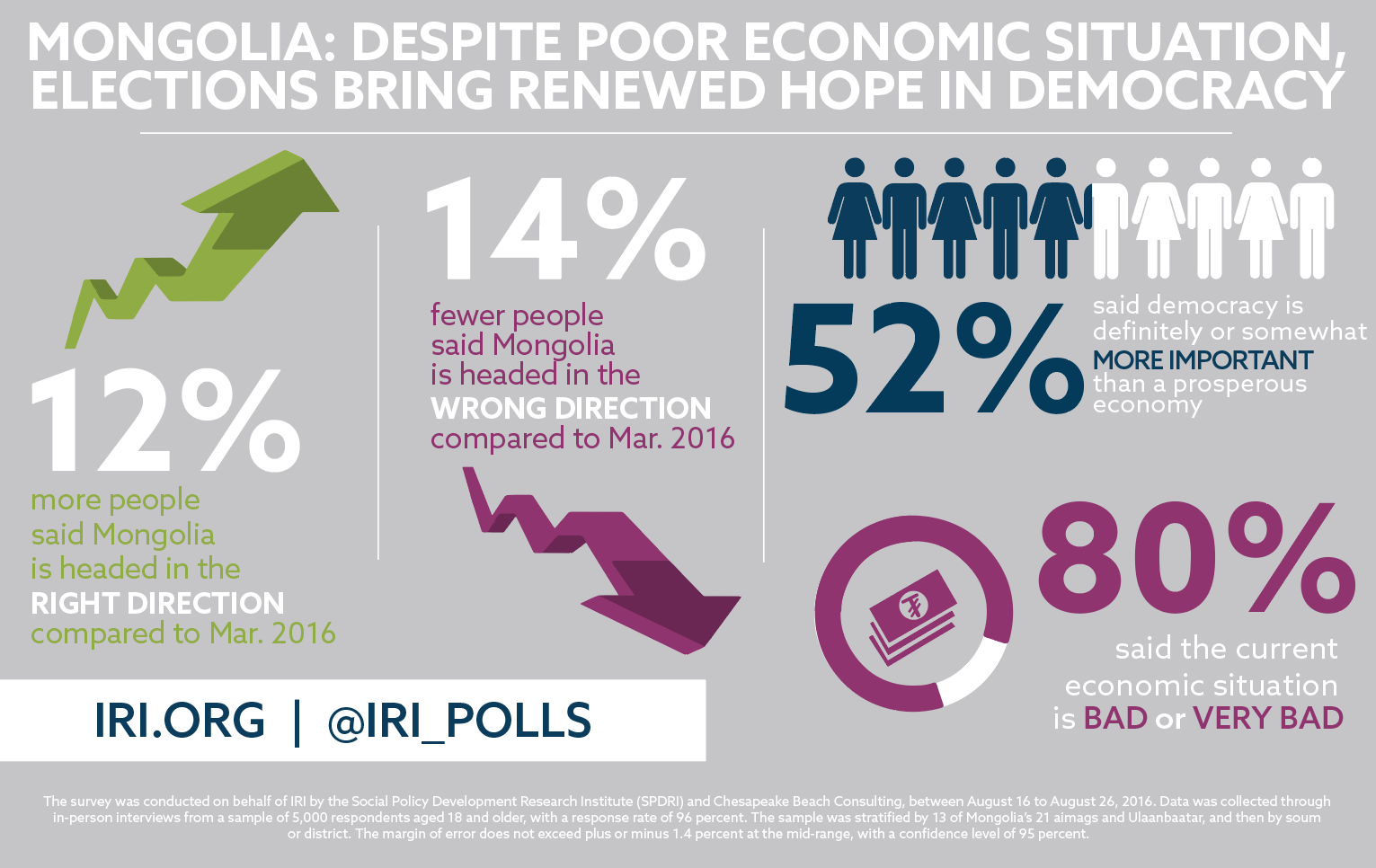 “This survey shows that Mongolians have invested a great deal of faith in the new government and in their democratic system,” said Derek Luyten, IRI Regional Director, Asia. “If the government is to sustain this goodwill, it will need to take effective action to address key issues of concern such as the economy and corruption and commit to working in the interest of all Mongolians.”

IRI’s poll reflects enthusiasm for the results of the June parliamentary elections, with 80 percent reporting they would vote the same way today as on June 29. More than half are either “very optimistic” (16 percent) or “somewhat optimistic” (40 percent) that the newly-elected parliamentarians will fulfill their electoral promises. Similarly, the poll shows a 12-point increase (up to 31 percent from 19 percent) of respondents who feel the country is headed in the right direction, and a corresponding 14-point decrease (down to 47 percent from 61 percent) of those who feel it is headed in the wrong direction.

Forty-five percent of “wrong direction” respondents cited economic instability as the reason for their response, while 80 percent of all respondents described current economic conditions as “bad” or “very bad.” Corruption continues to be a concern for Mongolians: 76 percent consider it to be a major problem.

The democratic spirit is reflected in citizen perceptions on voting and democracy. A combined 80 percent believe that voting gives them the chance to influence decision making (37 percent “strongly agree,” 43 percent “somewhat agree”), and the number of respondents who consider democracy more important than prosperity rose 10 points from March 2016 (up to 37 percent from 27 percent).

The poll also indicated improvements in perceptions of women’s political participation. The number who “strongly agree” that women are equally represented in political decision-making jumped from 12 percent to 21 percent, and those who “somewhat agree” rose from 27 percent to 35 percent. However, 40 percent of those polled noted that the male-dominated political structure remains a barrier to women’s participation in politics.

This survey was funded by Global Affairs Canada and conducted on behalf of IRI’s Center for Insights in Survey Research by the Social Policy Development Research Institute and Chesapeake Beach Consulting between August 16 and August 26, 2016. Data was collected through in-person interviews from a sample of 5,000 respondents aged 18 and older, with a response rate of 96 percent. The sample was stratified by 13 of Mongolia’s 21 aimags and Ulaanbaatar, and then by soum, or district. The margin of error does not exceed plus or minus 1.4 percent at the mid-range, with a confidence level of 95 percent.