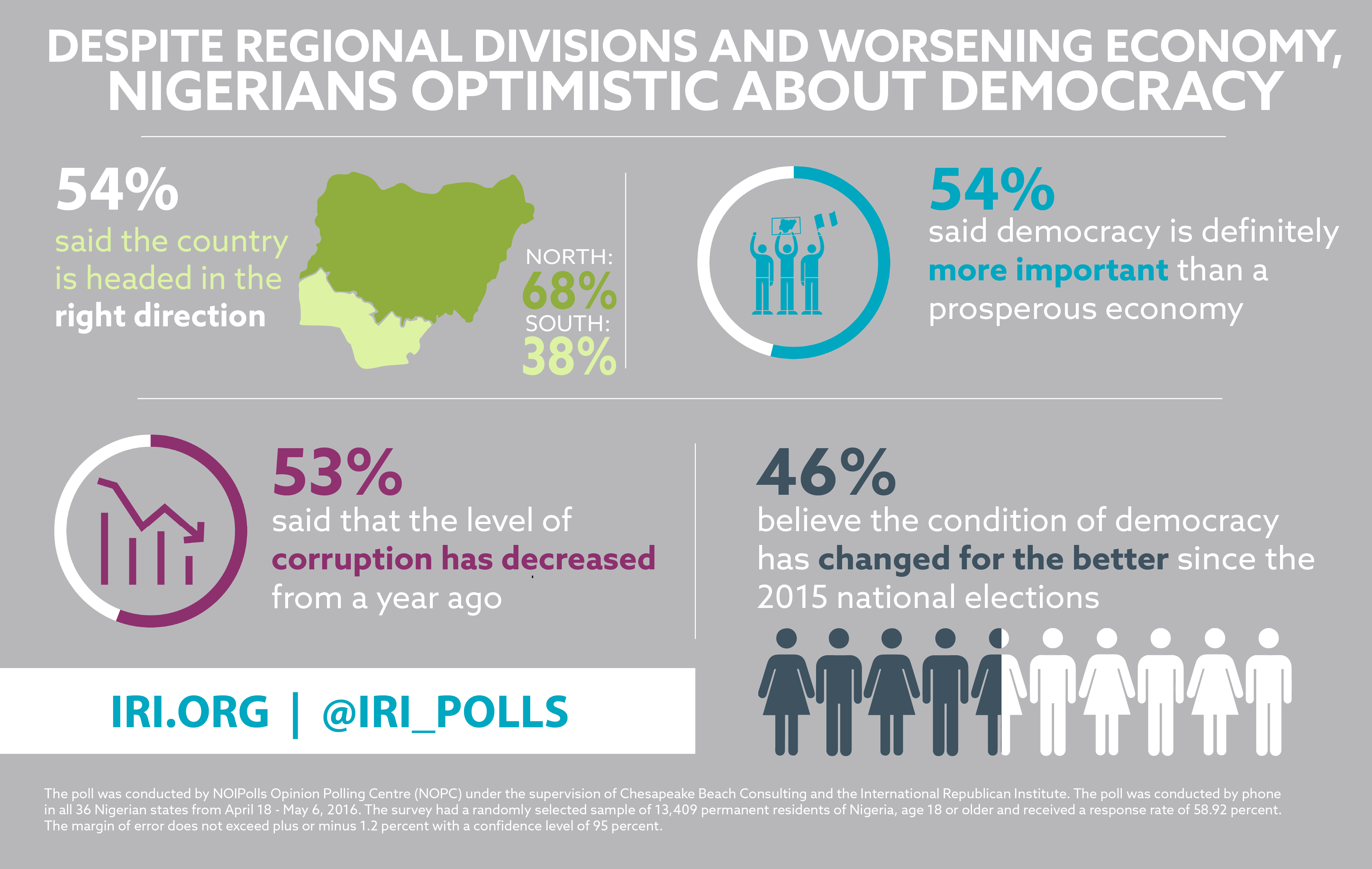 Abuja, Nigeria—A poll released today by IRI reveals that Nigerians remain polarized between North and South, but support the democratic process and believe that democracy has improved since the 2015 national elections.

“This poll attests to the significant work that Nigeria’s government must do to address regional divisions and other issues of governmental responsiveness and accountability affecting the Nigerian people,” said John Tomaszewski, IRI Acting Regional Director, Africa. “But it also highlights the tremendous achievement of the Nigerian people in committing to the democratic process despite the difficulty of past elections, and is a promising indicator for the country’s democratic development since the return to democracy in 1999.”

While overall 54 percent of Nigerians feel that their country is headed in the right direction, divisions in perceptions of the country’s trajectory are stark. Almost half of respondents in the North-East (40 percent) said the country is headed strongly in the right direction, compared to just 10 percent in the South-East, where 49 percent believe that the country is moving strongly in the wrong direction. A similar split can be seen in regional perceptions of the economy: 75 percent of respondents in the South-East think the economy has gotten worse, compared with 44 percent in the North-East.

While respondents in the North and South differ on a number of issues, questions regarding elections indicate commitment to the concept of the democratic process nationwide. Sixty-eight percent of respondents indicated their intention to vote in the next election and 46 percent feel that the condition of democracy had changed for the better since the 2015 elections.

Strikingly, the majority of respondents (59 percent) consider democracy to be more important than prosperity, compared to 37 percent who find prosperity to be more important to them. This preference for democracy comes despite the crippling economic challenges facing the country, with 57 percent of respondents reporting that their personal economic situation has gotten worse over the past year. The survey also reveals a widespread perception that corruption is declining, with 53 percent of respondents reporting that corruption has decreased in the past year. However, it is important to note that this perception is largely split between the North-South lines, with more negative views noted in the South than in the North.

A total of 13,409 interviews were attempted with 7,901 interviews completed (response rate 58.92 percent). All respondents were aged 18 and older. Interviews were conducted by phone in five major languages spoken in Nigeria:  English, Pidgin English, Yoruba, Hausa and Igbo. Geographic quotas were assigned to ensure that every senatorial district was proportionately represented in the sample across all 36 Nigerian states. The margin of error does not exceed plus or minus 1.2 percent at the mid-range with a confidence level of 95 percent.

The survey was conducted by NOI Polls under the supervision of Chesapeake Beach Consulting and the International Republican Institute between April 18-May 6, 2016.