A Reminder from Mayor Klitschko

As many of my colleagues in the field can probably attest, the incredibly fast pace of our work overseas sometimes makes it easy to forget about the amazing communities that we actually live in.

The constant travel to the regions of Ukraine and the many hours of trainings, consultations and meetings with local political and civic leaders can be very demanding at times; but then we receive a tangible reminder of the positive impact our work has had. Just before the Christmas holiday, we received a letter from Kyiv Mayor Klitschko thanking us for our longstanding work in Ukraine and recognizing its continued need even from more privileged cities like Kyiv.

According to a July 2015 IRI public opinion survey, 67 percent of Ukrainians believed that more responsibilities should be transferred from central to local authorities.  Over the past 20 years, IRI has been at the forefront of democracy assistance at the local level, developing longstanding relationships with municipal political and civic leaders through our capacity building of local governments and citizen engagement programming.  With decentralization legislation and constitutional amendments likely to be approved by the Verkhovna Rada in near future, it is critical that locally elected officials be empowered to take on these additional responsibilities.

I hereby would like to thank you for the productive activities of the International Republican Institute in Ukraine and express my hope for further collaboration.

Our cooperation on a project to train members of the Verkhovna Rada of Ukraine and local councils has helped them to master the skills of successful communications with their local communities, NGOs and mass media and to share best practices with their peers from other Ukrainian regions and countries that have effectively implemented democratic governance principles. These activities have significantly improved the democracy and openness of the Ukrainian government at all levels.

In the context of decentralization and devolution of power in Ukraine, it will be of particular importance in the near future to prepare staff members for work in this new environment. Training future reformers and exchanging practices with the countries that have successfully implemented the decentralization principles will play an important role. 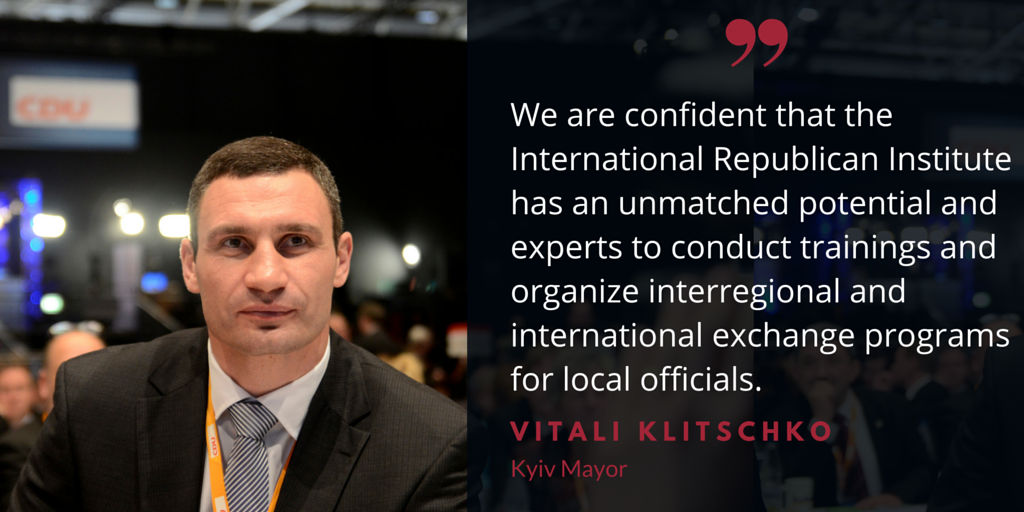