A Spotlight on Togo

In the past year, hundreds of thousands of Togolese have taken to the streets to demand the resignation of President Faure Gnassingbé, whose family has led the West African nation for more than 50 years.

A unique case in West Africa, Togo has been ruled by the same family for the last five decades, and before that, the transition of power came through a 1963 military coup d’état. The protesters have called for the return of presidential term limits, which were removed from the Constitution by Mr. Gnassingbé’s father in 2002. Partially meeting the opposition’s request, the government proceeded with a constitutional reform to re-introduce term limits, which they hope to have approved by referendum. However, the opposition claims that this “reform,” which is not retroactive, will not prevent the incumbent President Gnassingbé from running for two additional terms.

The disregard of constitutional term limits and manipulation of laws is a worrying trend in Africa. From the Democratic Republic of Congo to Uganda, several African leaders are extending their grip on power. Citizens have reacted to these tactics with anger and staged protests to express their disapproval.

In Togo, when countrywide anti-government protests began in August 2017, the situation quickly deteriorated when law enforcement killed two citizens during a violent crackdown. Other reported injuries and arrests only strengthened the opposition’s determination to stand up against the repressive regime.

In January, IRI hosted a panel of prominent Togolese activists to discuss the growing political crisis. The panel consisted of Ms. Farida Bemba Nabourema, a prolific Togolese political activist, Mr. Wolali Ahlijah from the Togolese Civil League, and Mr. Kango Laré-Lantone, a former member of Togo’s High Council of the Republic (the transitional parliament from 1991-1993). IRI’s Hugues Marsac moderated the event. The panelists’ unpacked the Togolese crisis and explained the struggles of Togolese citizens in the face of brutal government response.

During his opening remarks, IRI President Dan Twining emphasized the importance of Togolese civic activists and how their work is reflected in the modern world. “One man, one family, one party rule is not how you are modern. Part of being modern today is being free to choose, including having a political choice.” 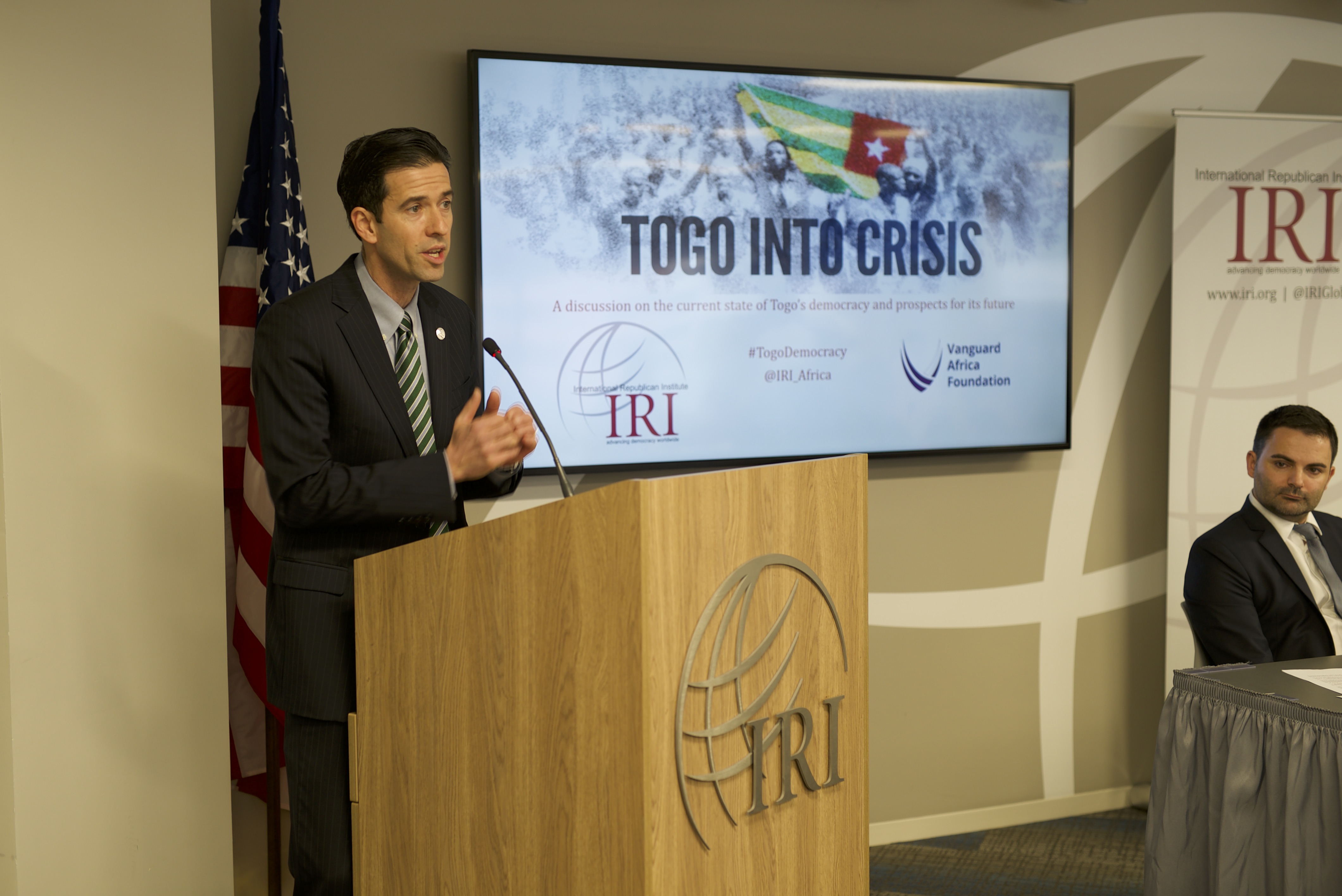 The panelists highlighted the struggle of Togolese activists to push for the re-introduction of a retroactive presidential term limit in the 1992 Constitution, Mr. Gnassingbé’s resignation, and a call for a genuine National Dialogue under the auspices of international stakeholders. Mr. Laré-Lantone agreed that Mr. Gnassingbé must resign but stressed that the opposition should place a “stronger focus on institutional building for sustainable democratic reforms.” When asked how strong Mr. Gnassingbé’s dominance is over his citizens, Mr. Laré-Lantone said, “I don’t think he (Faure) has full control. I think that is the image they are trying to project. But from within, they are worried, seriously worried. Because you see, what we have is a movement versus institutional arrangement.” The discussion highlighted that the Togolese people are ready to enter what President Twining described as “the modern age,” while their antiquated leaders are insisting the country and its people remain in the past.

To preface the discussion, Mr. Laré-Lantone gave an overview of Togo’s undemocratic political history, explaining how Gnassingbé Éyadéma, who seized power through a coup d’état in 1967, ruthlessly reigned until his death in 2005 by repressing opposition, evading the law, and manipulating the Constitution to ensure complete power. Following Éyadéma’s death in office, his son Faure ascended to replace him as the country’s leader. Togo is the last country in the Economic Community of West African States and one of the last on the continent without presidential term limit. This has fostered an environment where Mr. Gnassingbé, just like his father, can perpetuate the family’s grip on power.

Ms. Nabourema pleaded and encouraged the international community to recognize the ongoing crisis and step in to support civil society. “The international media is not covering our situation, and we have been protesting for months. We want the Togolese media to be supported. There are grave human rights offenses that need to be reported,” he said. “Civil society has been abandoned. Togo’s civil society is one of the most under-funded on the continent. This is why the regime has been able to crush us.”

The panelists and audience members demonstrated their understanding of Togo’s fragility. Mr. Ahlijah reminded the audience of the importance of what is happening in his country, “The situation in Togo is special right now because patience among the people has run out. This is when people rise and take charge.” 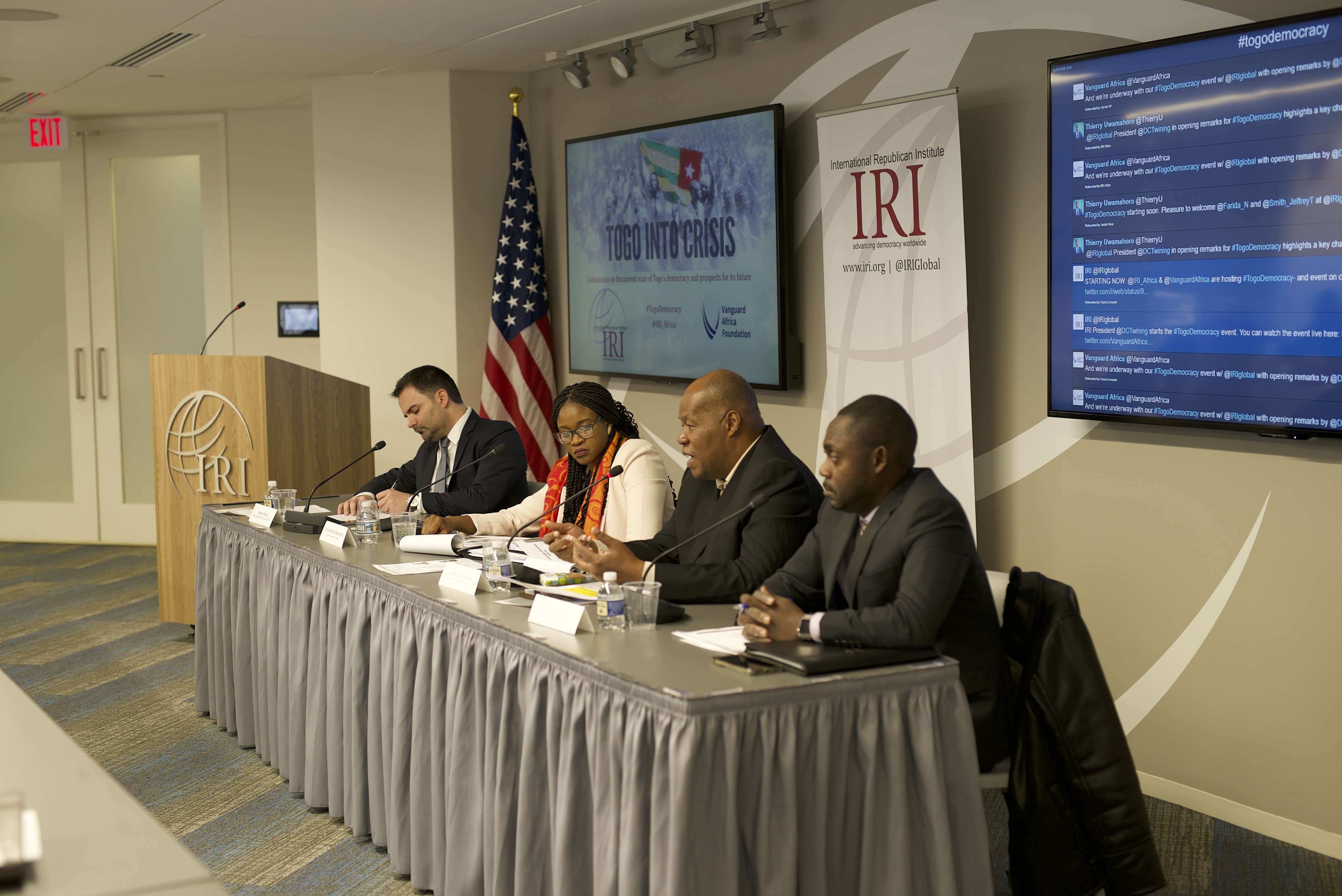 Togo’s political tensions are high, and history has shown that threatened governments often use violence as the preferred tactic to suppress the opposition from continuing its fight for freedom. During the question-and-answer period, an audience member stressed, “It’s the time for action. There is a revolution going on for sure. But we want to avoid bloodshed.”

Togo’s current situation is extraordinarily delicate, and it is crucial for all parties to recognize the country’s instability. As the Togolese opposition continues forward in its fight for freedom and democracy, the international community must put pressure on the government to respect democratic rights of Togo’s citizens and to enact significant and meaningful political reforms.

Since IRI hosted this panel on the crisis in Togo, the long awaited national dialogue began between the various political parties and the government in mid-February, with Ghanaian facilitation and oversight. After only a few days of discussion, the dialogue was suspended, before resuming on March 23, alluding to a disheveled process that is far from completion. However, the opposition seems determined, so will their drive and belief in a better future for Togo be enough to democratically oust a dictator?