A Step Forward for Kyrgyzstan, and a Chance to Address Long-Standing Problems

Last month, IRI’s Center for Insights in Survey Research (CISR) released a new Kyrgyzstan poll based on interviews conducted in the weeks after that country’s October 15 presidential election.

The survey was conducted to measure public feelings about the election. Although fraught with controversy, the election nonetheless stood as a remarkable achievement for the country as it marked the first transfer of power from one popularly elected leader to another, not only in the Kyrgyz Republic but in the whole ex-Soviet Central Asia region.

The consensus among the academic and political community has been that there is legitimate cause for concern about the pre-election environment – with alleged voter intimidation, vote buying, and attacks on independent media – but that the Kyrgyz government is worthy of commendation for smooth implementation of the voting process. A process through which a great number of citizens had the chance to exert meaningful influence on the selection of their leaders.

The CISR poll data captures some of the cautious optimism of the post-election atmosphere last November, with about half of respondents saying the election was free and fair, and about two-thirds saying they believed their country was going in the right direction.

It is typical of the problems faced by the country, however, that as the poll data was being released in February, Kyrgyzstan’s capital Bishkek was struggling with a brutal cold snap made worse by the shutdown of the city’s thermal power plant on January 26. The plant had undergone high-profile renovations last year at the cost of nearly 400 million US dollars. Residents were left perplexed and angry that they were still freezing and without electricity despite this investment that was supposed to help modernize the city. As journalist Anna Kapushenko wrote on her Facebook account (translated and quoted in Eurasianet.org): “Winter serves as a gauge of our government’s efficiency. And this government is not coping at all.”

The Kyrgyz government has a real opportunity to prove itself as a sustainable and successful democracy, but to do so it must demonstrate the will and the ability to solve practical problems and provide basic services.

Kyrgyzstan has drawn attention as a democratic oasis in Central Asia for many years, often through favorable comparisons to its authoritarian neighbors. CISR survey data shows that most citizens are satisfied with how its democracy is progressing. But it also shows that corruption and poor infrastructure consistently place near the top of lists of citizens’ concerns. Bad roads, insufficient schools and kindergartens, and low salaries for government workers contribute to widespread dissatisfaction. 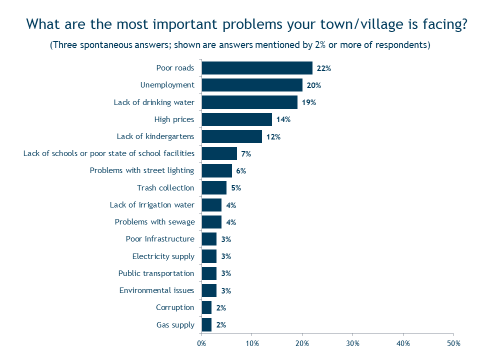 In 2010, a popular revolution overthrew the corrupt president Kurmanbek Bakiev and installed a new constitution and a parliamentary form of government. But a few years later in 2014, natural gas was cut off to the south of the country for almost nine months due to stalled negotiations with neighboring Uzbekistan. Citizens worried that their new democracy was failing them.

That is not to say that things have not been getting better. The recent poll data shows several years of sustained positivity about the direction of the country and its economy. It shows that though internet access still does not penetrate large sections of the country, internet usage has become more frequent for those who do have it. And, it shows a general feeling that the younger generation can and should be more involved in political decision-making. 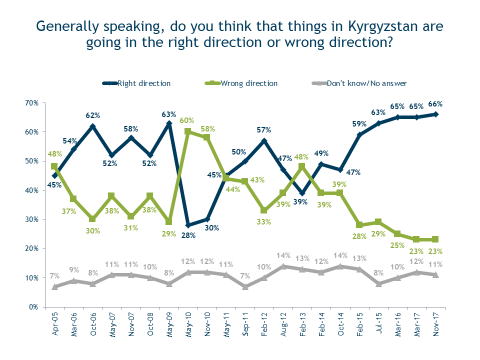 It also depicts other notable trends in the region, such as dramatic shifts in the relations between neighboring republics. The percentage of Kyrgyz respondents viewing relations with Uzbekistan as “good” spiked 30 points between March and November 2017, likely due to hope for increased trade and a more relaxed situation on disputed sections of the border. Stronger Kyrgyz-Uzbek relations could mean a natural gas crisis like the one in 2014 will not happen again.

Meanwhile, perceptions of northerly neighbor Kazakhstan moved in the opposite direction. Historically the relationship has been quite good, and in March 2017 nearly 90 percent of respondents in Kyrgyzstan believed it to be so. However, the border was all but closed in October amid a flurry of accusations regarding election meddling, and in November, less than half of Kyrgyz respondents considered the relationship with Kazakhstan to be good, a drop of more than 40 points. 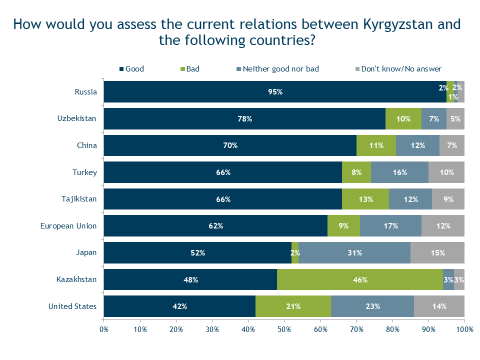 The dramatic seesawing of public perception of Kazakhstan and Uzbekistan shows that the attitude of the populace is still highly reactive. Citizens are paying attention to the news, and they are sensitive to the policy changes that affect them, whether they relate to gas imports or the customs rules for inspecting fruit. Voters are willing to change their minds when confronted with compelling reasons to do so, and they are willing to express their opinions to pollsters, journalists, and ballot boxes– all positive things for a democratic culture, which needs independent thinkers if it is to identify and resolve problems.

These rapid changes in how citizens answer certain questions only put into sharper relief how consistently they answer others. For eleven polls in a row, dating back to September 2011, the percentage of respondents considering corruption to be a big or very big problem in the country has never dipped below 90 percent. 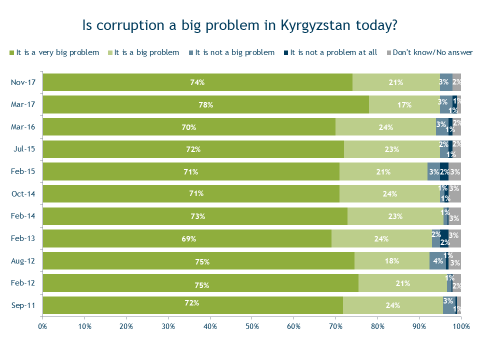 People are happy that their government is more democratic. But for a democratic government to be good, it needs to make measurable progress in improving the standard of living. Democratic development takes decades or generations, but it depends on the enthusiastic support of regular people, and regular people have the right to expect their government to be effective, honest, and accountable. They should not have to rely just on hope. They should demand things like heat and electricity, like clean water and honest leaders, and they should get them.

There are indicators that the newly-elected Kyrgyz president Sooronbay Jeenbekov might be making moves to address some of these long-standing problems. In particular, he has stated intention to make the fight against corruption a priority. On February 8, Jeenbekov announced to the Security Council that “we must eradicate corruption from all areas without exception, from the highest echelons of power to each local village authority”, as quoted in The Times of Central Asia. AFP journalist Chris Rickleton noted in a tweet on February 13 that this tone resembles some of the pronouncements made by Mirziyoyev in Uzbekistan since 2016, as part of a campaign to reform both the economy and the government. If pursued transparently and steadily, the fight against corruption in both countries would mean that the region’s great wealth could at last translate into improved public wellbeing, instead of being stolen away by those with the power to do so.

The region is changing fast. People believe it’s changing for the better. They deserve not to be disappointed.