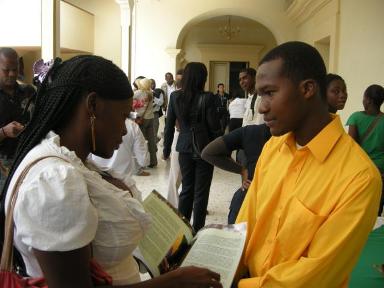 In 1993, Colombia passed Law 70, legislation to protect and support Afro-Colombians by guaranteeing their rights and asserting that Colombia’s government must act proactively to accomplish this.  Unfortunately, this law has never been fully implemented, and as a result, Afro-Colombian communities continue to suffer from a lack of government interaction and the benefits which it brings.  This has caused a large disparity in living conditions between Afro-Colombians and the rest of Colombia’s population which has been well documented by both international and domestic institutions (see United Nation’s report on discrimination in Colombia (Spanish version), and statistics on Afro-Colombian populations).

In order to close this disparity, IRI, through a grant from the U.S. Agency for International Development, has been partnering with state legislators and governors to draft and implement ordinances concerning Afro-Colombians in the departments of Bolívar, Cauca, Nariño, Sucre and Valle del Cauca since 2008.

The most recent of these ordinances approved was in the department of Cauca, where a final reading of the bill took place on February 17, 2011, attended by leaders of the Afro-Colombian community, members of civil society and representatives of the Colombian government.  The ordinance calls for the creation of a public policy committee which will include Afro-Colombian representatives and also guarantees funding for projects which the committee will oversee.  Overall, the purpose of the committee is to ensure that the ordinance does not suffer the same lack of implementation as Law 70, and becomes a meaningful piece of legislation, with concrete and positive influence on the lives of Afro-Colombian communities.  The committee will also enable citizens to practice enhanced oversight and ensure that the ordinance becomes more than just words on paper.

IRI’s support for departmental ordinances is one example of its work with Afro-Colombian communities and civil society at the local level.  Since 2007, IRI has carried out a broad range of initiatives to improve the representation of Afro-Colombians.  At the national level this has included work with political parties across the ideological spectrum on Afro-Colombian initiatives, and work with members of the Afro-Colombian Caucus to develop its abilities in advocating for their constituents.