Plaza Bolivar is Bogota’s historic public square, just yards from the spot where Colombia secured her independence and around the corner from some of the national government’s most powerful offices.

Hours after it became clear that the referendum on the 297-page peace accord between the government and the FARC guerillas had failed, a small group of Colombian youth pitched a cluster of tents in Plaza Bolivar. In the days that followed, more youths and more tents joined that initial group, creating a tent settlement dubbed “Campamento Por La Paz” (Camp for Peace). Banners around the camp inform onlookers they can follow camp activities through Facebook, Twitter, Instagram and the like.

Many of the handwritten signs around Camp for Peace make it clear that residents aren’t necessarily there for the Havana-negotiated accord itself. They aren’t there in support of or in opposition to any one leader or party. Instead, their presence seems powered by disbelief that peace and reconciliation continue to elude their beautiful land. They feel let down by a ruling class that, for whatever reason, cannot secure a peace that everyone, left and right, young and old, says they support.

Colombia’s path forward isn’t entirely clear. One young Colombian told me the victory of the “no” vote was like losing a loved one…something too painful to dwell upon.But peace itself, and the reconciliation it requires… everyone agrees the journey must continue.

Whatever the next steps may be, they must include an outreach to the residents of Camp for Peace and the generation they represent. Those tents are in Plaza Bolivar because young Colombians are disillusioned with political leaders who can’t find what everyone claims to support. It’s not the accord document they protest for — few even knew what it contained. They’ve pitched tents, hung banners and posted signs looking for a political system that represents them…that serves and responds to them.

It’s crucial they find it. 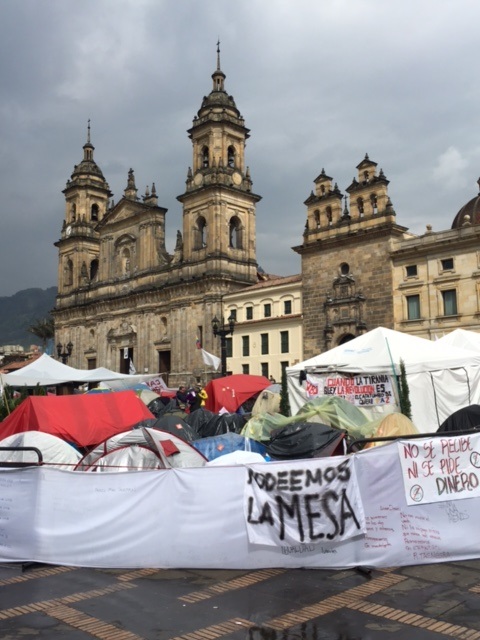