A December of discontent along the Danube continues into the new year.

In both Belgrade and Budapest, tens of thousands of protesters flooded the streets demanding checks on what they describe as the monopoly of ruling party power over political institutions. Though there seems to be no direct coordination between the two protest movements, they are running parallel courses through similar political environments, with Serbia dominated by President Aleksandar Vucic and the Serbian Progressive Party and Hungary by Prime Minister Viktor Orban and Fidesz.

In Belgrade and Budapest, protesters represent broad swaths of the urban population from various streams of political thought. In Hungary, supporters of the historically far-right Jobbik marched with backers of the center-left Democratic Coalition and Hungarian Socialist Party, trade unions and people waving the flag of the Roma ethnic minority. In Serbia, supporters of the far-right Dveri joined forces with backers of political stalwarts like center-left Dragan Djilas as well as LGBT protesters proudly displaying rainbow flags as they marched.

Like in America, protesters rally in the streets for many different reasons.  The immediate causes that channeled these diverse coalitions into the streets differ. In Hungary, a law allowing employers to require up to 400 hours of overtime per year while delaying payment for overtime hours for up to three years, popularly referred to as the “slave law,” is the main impetus. In Serbia, 2018 was a bloody year full of attacks on politicians and journalists: protesters cite the failure of the government to investigate the January 2018 assassination of Kosovo Serb politician Oliver Ivanovic, the brutal November beating of opposition politician Borko Stefanovic, and the December assassination attempt on journalist Milan Jovanovic, among others, as evidence of the government’s incompetence or complicity in political violence.

Protesters’ demands extend to what they see as an undercurrent of longer-term threats to checks on government power as well. In Hungary, protesters demand that the government cease its interference in the independence judiciary. In December, Hungary passed a law establishing a parallel court system that would rule on matters related to elections, corruption and protests, accountable directly to the Minister of Justice.

In both Hungary and Serbia, protesters demanded that the governments release some of their grip over the media. In Serbia, journalists claim that editorial policy is crafted to fit the narratives set by President Vucic’s office. Media monitoring by the Bureau for Social Research (BIRODI) in advance of the 2017 elections showed that Vucic received an overwhelming share of media attention, including 62 percent of all TV time given to Presidential candidates. Addressing the imbalance in media coverage, Serbian protesters are demanding five minutes for their representatives on the state-run Radio Television of Serbia, the most-watched station, and the regular appearance of opposition politicians on the station.

Though the European Parliament voted in September to condemn the Hungarian government’s near-total dominance over the media landscape, Fidesz has continued to consolidate control. In November, over 400 Hungarian news companies, including every newspaper in the country, were simultaneously “donated” to a holding company controlled by close allies of Prime Minister Orban. In December, opposition lawmakers went to the state media’s headquarters in a failed attempt to broadcast protesters’ demands; four were assaulted and one hospitalized when security guards threw them out.

The breadth of the protesting coalitions, uniting far-right, centrists and leftists, is a source of both strength and weakness. Though protesters are clear in their opposition to the ruling parties, what to replace them with is a tougher question, and the open-tent nature of the protests risks ideological incoherence. 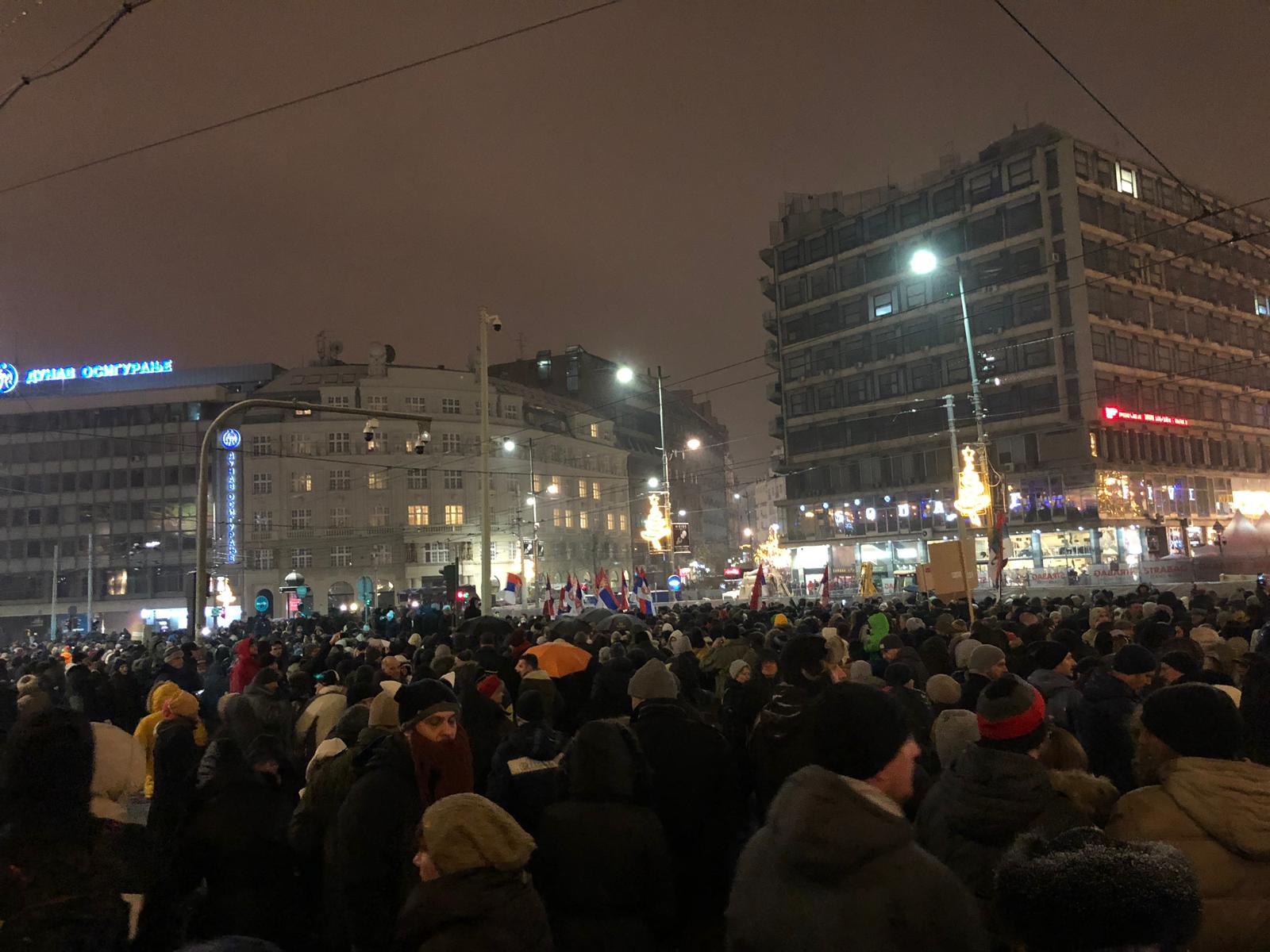 In Serbia, for instance, Vuk Jeremic, a right-wing politician supporting the protests, condemned President Vucic for giving up Serbian interests in neighboring Kosovo and Bosnia and Herzegovina. This attempt to outflank the Progressives from a more nationalist angle risks alienating those who oppose Vucic precisely because of what they see as his history of aggressive nationalism.

In Hungary, a Jobbik spokesman declared in January that the party has a higher goal to restore democratic institutions, which it shares with some of the other opposition parties. But the party rejected proposals to run a joint list for the European Parliament elections with fellow opposition parties such as the Democratic Coalition, calling the proposed all-opposition joint list a farce, citing fundamental policy disagreements among the parties.

By early January, the Serbian protests spread to at least three other cities, while the Hungarian protests spread to at least six more cities. But in part due to the controlled media and in part due to ideological incoherence among the protesting coalitions, the governments in Hungary and Serbia seem secure. A poll fielded in December by Publicus Research revealed that 50 percent of Hungarians are uncertain who they would vote for. Of those who were sure, Fidesz was the most popular at 46 percent support, well ahead of Jobbik and the Hungarian Socialist Party at only 18 percent each.

In Serbia, a poll by Faktor Plus revealed that the ruling Serbian Progressive Party still dominates: 54 percent of decided voters would support the Progressives, putting them nearly 40 points ahead of the opposition Alliance for Serbia (about 14 percent). The Socialist Party of Serbia, which is currently in coalition with the Progressives, comes in third at 10 percent, making it the only other party to pass the 5 percent threshold to enter Parliament.

Perhaps, then, the greatest strength of Fidesz and the Serbian Progressive Party is not that they are popular, but that the opposition politicians are even more unpopular. Most of the protesters are totally disillusioned with all politics and politicians. But the rejection of politics inhibits protesters’ ability to defend any concessions they may win from their time in the streets. Unless opposition parties can put forward a common positive vision for their society, the protests are likely to ebb, at least until the next crises in Hungary and Serbia.

Discontent may bubble along the Danube, but it hasn’t overflowed yet.