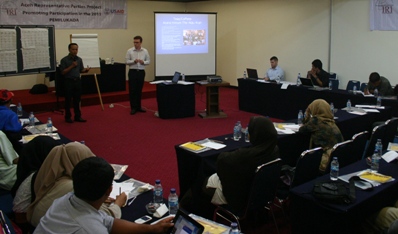 On November 14, 2011 voters in Aceh are scheduled to go to the polls to choose their governor and vice governor, as well as district government executive posts across 17 districts in this northern province on the island of Sumatra.  Although there is controversy surrounding the elections, IRI has launched a series of workshops to help candidates and political parties develop and run issue-oriented, grassroots campaigns.

The workshops also focused on message development which links campaigns to issues of local concern to voters.  Participants were asked to identify issues important to their electorate and crafted messages and campaign platforms that would likely resonate with voters.  The workshop helped parties and candidates strengthen their campaign skills, with one participant, the Deputy Chairman of the United Development Party, saying, “The training had inspired me to design effective campaign strategy based on election regulation.”

As the elections approach, IRI will also assist party agents who will monitor the polls on Election Day.

In spite of having an election date laid out by the Aceh Independent Election Commission, the controversial issue of whether independent candidates will be allowed to run has raised some doubt that the election will take place as scheduled.  In December 2010 Indonesia’s Constitutional Court overturned Aceh’s ban on independent candidates, a ruling some say infringes upon Acehnese autonomy.  Others feel ban was used as a way to exclude political opponents.  Raising the profile of this issue is the fact that current Aceh governor, Irwandi Yusuf, is planning on running as an independent candidate.

As the only province in Indonesia that allows local parties, Aceh faces unique challenges in conducting competitive, participatory elections.  Aceh’s capacity to sustain peaceful, democratic institutions will depend on the ability of local parties to develop effective campaigns and voter outreach.  IRI’s program, funded by the United States Agency for International Development (USAID), promotes stability in Aceh through political party participation in the 2011 local elections.