Cartagena Officials See the Success of Local Programs in Brazil 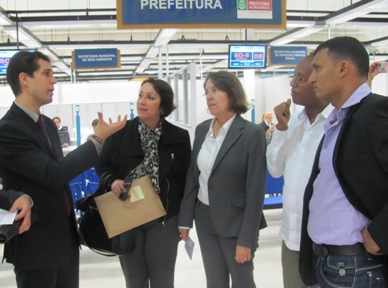 In developing democracies throughout the world, elected leaders often come to office without having previously been exposed to domestic and international models of effective democratic governance.  In order to address this challenge, IRI’s Rising Stars initiative exposes emerging leaders to successful democratic practices in other countries.

As a part of the initiative the mayor of District II in Cartagena, Colombia, Reinaldo Manjarrez and three members of his cabinet traveled to the Brazilian cities of Rio de Janeiro and Porto Alegre.  During their week-long visit, the Colombian delegation met with government officials, civil society organizations and university departments to learn of the work that each performs in areas such as public safety, poverty reduction, e-government and citizen participation.

In an effort to gain a greater understanding of effective municipal poverty reduction programs, the delegation visited Rio de Janeiro’s Bolsa Unica and Rhenda Melho programs which assist families in extreme poverty by providing conditional cash transfers and enhanced access to housing, education, health and employment.  The delegation also visited the municipal one-stop-shop, Poupa Tempo, to see how officials there effectively delivered services.  Having recently inaugurated its own one-stop-shop, known as DeUna, Cartagena is currently looking to improve its local model of municipal service delivery and adopt best practices from other cities.

While in Porto Alegre, the city most known as the birthplace of participatory budgeting, the Colombian delegation visited the Porto Alegre City Observatory, or ObservaPOA, which collects and registers geographic and demographic municipal data that is used to inform the city’s annual budgeting process.  The observatory’s website distills the collected data into an interactive map used to more effectively identify the city’s needs and priorities.  Annually, the municipal government of Porto Alegre holds participatory budgeting assemblies that allow citizens and local civil society organizations to participate in the allocation of public funds.  During these assemblies, projects are prioritized through popular vote and inserted into the administration’s budget.

Mayor Manjarrez and his staff have now returned to Cartagena with new ideas and best practices in effective and participatory democratic governance that they will now seek to replicate.  IRI has worked alongside this local administration since 2009 to aid in the design and adoption of initiatives and practices that ensure government and civil society are able to more effectively and collaboratively address the needs of citizens and communities.

Launched in 2007, IRI’s Rising Stars initiative ensures the leaders of new democracies are fully equipped with skills in effective democratic governance.  Through international exchanges, participants are exposed to the experience of successful democracies, and obtain insight into the challenges of democratic governance and best practices in policy development.

Rising Stars meet with decision-makers who have played an important role in their country’s democratic opening such as government officials, political party representatives and civil society leaders.  While sharing their successes institutionalizing the rule of law, fostering economic openness, and laying the foundations for representative democracy these individuals also lend participants advice and recommendations on managing the many challenges that exist during the consolidation of a democratic system.  Through these initiatives, IRI is cultivating a global network of tomorrow’s democratically-minded leaders.