Corruption and Security: The Issues at the Center of the 2018 Mexico Elections

In July, Mexicans will go to the polls to elect more than 3,400 positions for federal, state and local offices- including the country’s president, governors in nine states, 1,596 mayors, and 1,100 legislative seats.

Although from a US perspective it is easy to get wrapped up in the most recent bilateral negotiations with Mexico, the central policy issues that are characterizing Mexican electoral discourse are both domestic and universal. Continued concerns about corruption, violence and citizen security will be decisive issues as Mexico approaches what is sure to be a significant election.

According to the most recent Corruption Perceptions Index published by Transparency International in 2017, Mexico ranked number 135 out of 176 countries. This number highlights the need for the government to continue to improve accountability and increase citizen oversight and transparency to prevent embezzlement, illegal use of public funds, and other forms of corruption that have sullied Mexican politics. The continued presence of corruption at all levels of government has caused the Mexican public to advocate for increased accountability and a change to the status quo of impunity.

The federal government responded to calls to combat corruption in 2016 with the passage of the National Anti-Corruption System (NAS). The NAS created the framework by which national and state institutions can establish independent transparency and accountability mechanisms. Although the NAS framework is a significant step forward in improving government oversight, national and state government entities have varied in progress toward its full implementation. This is the gap that IRI and its civil society partners are looking to fill. Operating together, IRI and our partners have worked alongside governments to realize NAS and the State Anti-Corruption System, the NAS’s state-level equivalent. The long-term existence and effectiveness of these anti-corruption reforms will be a key issue in the campaign season. Even more, the new administration’s ability to address corruption is essential to the overall support and health of the democratic system in Mexico.

Separate though connected to the issue of corruption is the continued concern for the country’s security and violence prevention. In fact, a persistently high murder rate, the continued presence of drug cartels and the targeted killing and intimidation of journalists keep the issue of security front and center in the public mind. Sadly, youth are disproportionately vulnerable to recruitment and involvement in criminal organizations. According to a 2016 report from the National Human Rights Commission of Mexico (CNDH), 35 percent of crimes committed by adolescents were related to organized crime. Moreover, 27 percent of youth interviewed indicated they belonged to a gang.

The continued prevalence of violence and organized crime has launched a nationwide discussion about the need to enhance and consolidate crime prevention initiatives. This conversation has caused political parties and candidates to ensure their platforms and campaigns address this all-important issue. In this environment, Mexican politicians and leaders have an opportunity to present plans that enhance citizen trust in the effectiveness of democratic institutions to resolve conflict as well as fortify the government’s commitment to preventing violence.

The ability of Mexican leadership to address corruption and violence is essential to the long-term economic growth and security of not only Mexico but the region at-large. As a strategic player within the Western Hemisphere, Mexico’s issues have ramifications on the security, economy’s and migration beyond its borders, particularly in the Northern Triangle and the United States. As a result, to follow the Mexico elections is to follow an event that will be highly influential to regional growth and collaboration. 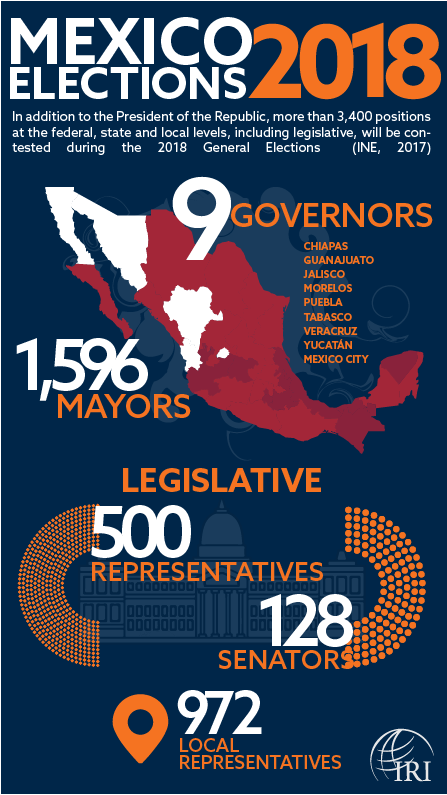