The people of Bhutan, who chose their local government leaders for the second time since its democratic transition on September 27, had more choices than ever with 3,391 hopefuls, including many women and youth candidates, vying for the 1,499 posts.

There are many possible reasons for this increase, including greater awareness amongst Bhutanese of the importance of the role of the local leaders and the improved remuneration package for elected local government officials. More choices can be beneficial for Bhutanese voters but despite the free and fair nature of the elections, there are challenges that will need to be addressed to continue to deepen Bhutan’s democracy.

A challenge for both candidates and voters alike, especially in rural Bhutan, was a language barrier that prevented constituents from understanding their candidates and candidates their constituents. Although Dzongkha is the national language of Bhutan, many in rural districts speak local dialects and do not understand Dzongkha very well. Prior to each local government election, the Election Commission of Bhutan (ECB) conducts a Functional Literacy Test to gauge the written and spoken literacy level of each candidate and only those who pass the test are eligible to stand during the elections. Even the best-prepared candidates that had polished, practiced speeches to give during voter forums were unable to convey their campaign pledges to all prospective voters since not all rural voters are competent in Dzongkha. Without being able to understand, it raises the question of how citizens made their choices.

In addition to having challenges communicating with rural constituents, candidates had limited financial resources with which to campaign. Local government candidates are ineligible for state campaign funds and are prohibited from spending more than Nu.50,000 (approximately $736 USD) of their personal funds for campaign expenses. This means local government candidates have a very small budget from which to cover venue rental, communications and utility bills, stationary and travel expenses. Many candidates decided to save money by not printing any posters, renting offices or conducting door-to-door campaigns, instead depending heavily on ECB-organized common forums to meet with voters – though those were hindered by the language barrier.

Despite the challenges, it is encouraging to see Bhutanese citizens actively exercise their rights and responsibilities in their unique democracy. 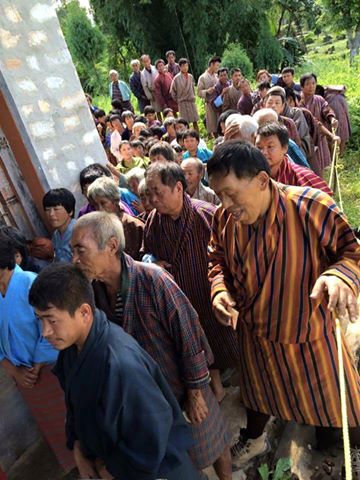