East Africa has one of the youngest populations in the world: with a population of 150 million, a staggering 45 percent are under the age of 15 and 28 percent are between the ages of 15 and 24 years old.

Recognizing the importance of engaging this community, the International Republican Institute (IRI) partnered with the East African Community (EAC), a regional intergovernmental organization composed of six countries in the African Great Lakes region, to organize the first youth dialogue on regional integration in Arusha, Tanzania in 2018.

EAC’s Youth Ambassadors Platform (EACYAP) organized the two-day event that brought together 65 youth delegates from Burundi, Kenya, Rwanda, Tanzania and Uganda to discuss ideas for meaningful youth participation in the region’s political and integration process, including but not limited to the expansion of equal opportunities to young people in the common market.

The dialogue helped engage young people’s energy and ideas, which when translated into policy and sustainable action, can be the most powerful driving force for peace, good governance and economic growth in the East African and Great Lakes region. 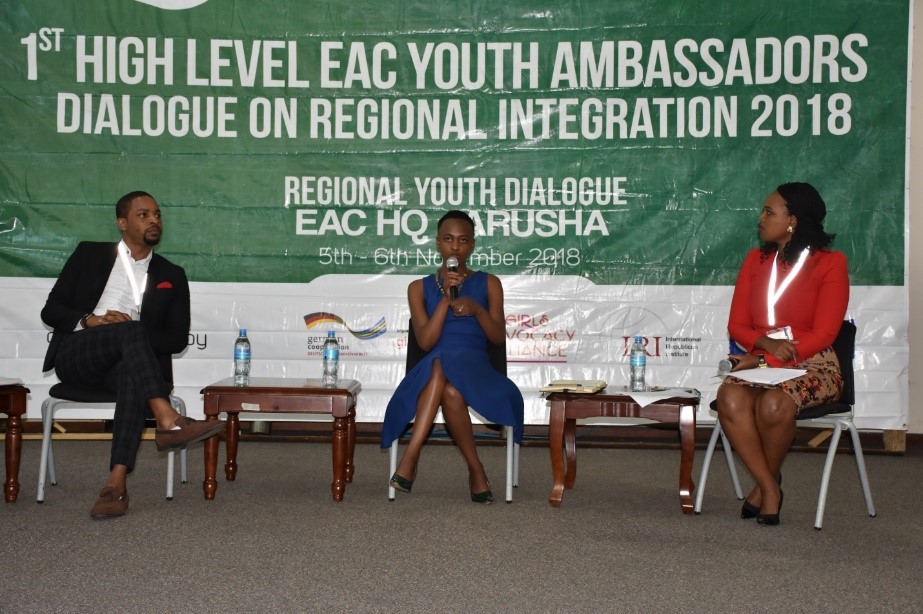 Jacob Price, IRI’s Africa Program Officer, spoke during the opening ceremony. He emphasized the importance of having youth at every level of policy making and political processes in order to have their perspective heard.

“Our hope is that the youth will be inspired to increasingly participate in the region’s political process, since IRI works majorly through the political parties in the EAC members States,” he added.

The EACYAP’s approximately 200 members actively participate in youth awareness activities, targeting over 70,000 students in universities and higher learning institutions of EAC member States. The platform brings youth together with the purpose of bridging the information gap about the EAC integration and fosters their participation in accelerating the region’s integration through knowledge and experience sharing. The EAC integration creates a platform among partner states to share equal opportunities and promote peace and security among members states. The integration includes the following pillars:

Currently EAC has achieved three of the four pillars, and “political federation” will be the last critical piece. Young leaders need to be aware of these regional processes and leverage these opportunities to advance the participation of young people in decision-making processes.

IRI encouraged the youth-led organization to be a center of inspiration for their peers, with regards to political transformation and transparency in their countries and become a pathway to leadership as it engages with political parties.  Our call within the EAC is to ensure young leaders become examples of democracy, good governance and human rights. By promoting these ideals in decision-making bodies, we help advance reform, and serve as role modes for current and future leadership in the region.

The EACYAP aspires to expand its membership to over 200,000 people, including college/university students and alumni in all the EAC member countries, by the year 2020. Currently, the EACYAP has over 200 members, and new members are joining every day from universities and civil society organizations. This platform will act as a strong vehicle for youth mobilization in the economic, social and political processes affecting the East African Community countries.

Our encouragement to other youth affiliated organizations that work across borders is to seek active partnerships with regional organizations like the EAC, which have the technical capacity to nurture and mentor them, with the aim of equipping them to be leaders and implement their ideas during policy formulation and application.