June 26 and 27, U.S. Vice President Mike Pence will travel to Brazil and Ecuador to strengthen bilateral trades and security relations. Adding Ecuador to this trip builds on clear messages from President Lenin Moreno heralding a sea change in Ecuador’s international relations. It will be the first time a U.S. Vice President has visited the country since 1987. The visit comes at an opportune time, responding to increasing signals of democratic opening and reengagement on the part of the current Ecuadoran government.

Just over a year ago, such a visit would have been unlikely if not unthinkable under former President Rafael Correa, whose populist rhetoric and actions – such as harboring WikiLeaks editor Julian Assange at the country’s London embassy – strained relations over his 10-year administration. Signals large and small from Moreno’s administration show that the antagonistic public relationship between the US and Ecuador seem to be receding into the past.

Ecuador is looking to reengage with allies from across the Americas, reaching beyond the ALBA alliance countries (including Venezuela, Bolivia, Cuba) and which formed its primary international network over the last decade. President Moreno is looking to refresh international relations, including with the United States, focusing on “areas of convergence” such as cultural, security and economic relations. On May 30 at the Americas Society/Council of the Americas’ Latin American Cities Conference in Quito, President Moreno spoke about Ecuador’s internal and external changes, including making his country more attractive to international trade and investment. 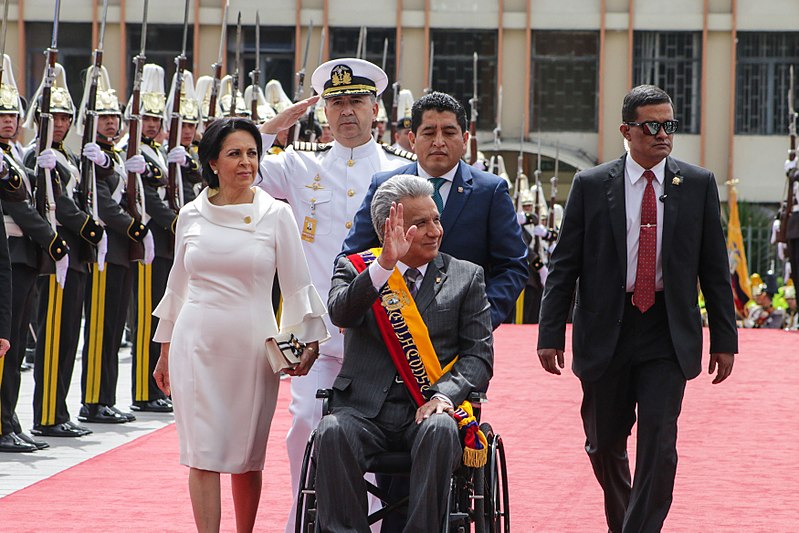 This spirit of engagement presents new opportunities for Ecuador, including building on existing foundations for cooperation. For example, the US is Ecuador’s primary partner for educational exchanges and trade—the countries exchanged over $10.2 billion in two-way trade in 2016. Ecuador has also been an important player confronting narco-trafficking and other transnational crime in the region, a role President Moreno is looking to strengthen.

Ecuador’s recent security challenges at the northern border with Colombia have opened another opportunity for greater international cooperation. Spillover violence from drug traffickers and former militants as Colombia implements its peace process is forcing Ecuador to deal with narco-terrorism it hasn’t seen in decades. In the weeks following the tragic kidnapping and murder of three journalists in late March and early April, public opinion polls showed security shooting to the top of Ecuadoran citizens’ concerns. Moreno’s government has reached out to democratic allies, including the US and Colombia, to help step up his country’s response.

Internally, Moreno has taken a number of actions that demonstrate a commitment to rebuilding democratic institutions that Correa weakened. He has pushed his government to take action against the high-level corruption attributed to his predecessor’s administration. Investigations have already led to the conviction and imprisonment of former Vice President Jorge Glas. Moreno also introduced a national referendum in February 2017, where Ecuadorians approved seven questions aimed at strengthening democratic processes and civil liberties. Over the last year, President Moreno has called for a new process of dialogue with civil society, made incremental improvements to executive decrees restricting freedom of association, and with the National Assembly has opened a process to reform the widely-criticized Communications Law, which was used to restrict freedom of the press under Correa.

In the context of China’s growing role as a trade and investment partner for countries in Latin America and the Caribbean, including Ecuador, democratic allies in the region have an opportunity to respond.  Chinese president Xi Jinping sent a strong message when he traveled to the country in 2016 to inaugurate a hydroelectric plant. While no U.S. president has visited Ecuador since Herbert Hoover, Vice President Pence’s visit signals growing US interest in Ecuador as a closer trade partner and destination for mutually beneficial investment.  This is especially important in the context of China’s growing presence and economic influence in South America.

Ecuador will need time to restore its democratic institutions and rebuild its economy after a decade under former President Correa who led it into the Bolivarian Alliance—or ALBA—sphere, dominated by Venezuela.  Now, President Moreno’s government is sending strong signals that it is ready to re-engage with democratic partners, including the United States. Vice President Pence’s upcoming visit demonstrates that Ecuador’s democratic renewal has not gone unnoticed.