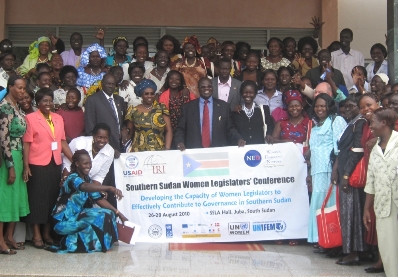 Developing the ability of women legislators to govern more effectively, especially with regards to addressing gender equality issues was the focus of a conference hosted by the Women’s Democracy Network (WDN) and IRI in partnership with the United Nations Development Fund for Women and the Government of Southern Sudan (GOSS) Ministry of Parliamentary Affairs.

The three-day conference also attracted top government officials including the Vice President of GOSS H.E. Riek Machar Teny; the Speaker of the SSLA, Honorable James Wanni Igga; Minister of Parliamentary Affairs, H.E. Michael Makeui; Minister of Labor, H.E. Awut Deng Achuila among other members of the cabinet of ministers; and the chairpersons of various government commissions including Dr. Pauline Riak, Chairperson of the GOSS Anti-corruption Commission.  The presence of these leading administration officials demonstrated the government’s commitment to encourage women’s empowerment throughout GOSS.

As Vice President Machar stated “I have heard surprise that we have attended the entire conference.  We focused attention to this workshop, because we think it is important.”

Minister Makuei echoed the Vice President’s comments, stating, “We have heard that message, we have grabbed it, we will take it back.”

The first component of the conference identified the concerns facing the women in Sudan and established priorities for joint action.  Participants heard from a variety of experts including the Under Secretary of the Ministry of Parliamentary Affairs H.E. Dr. Julia Duany, Member of the SSLA, Honorable Betty Ogwaro, and Ms. Kuer Dau, Program Manager of the New Sudan Women Federation.

Dr. Duany reminded the women “During the civil war, we women stuck together, united in purpose; however, after the war, we went our own ways.”

Participants agreed that it was important to work together and identified areas of action including abolishing customary laws, legislating against forced and early marriages and combating high child mortality rates.

The second component of the conference focused on strengthening the ability of the women legislators to more effectively govern.  This component utilized the international experience of successful women leaders from Nigeria, South Africa, Uganda and the United States and addressed the topics of effective legislation, gender-based budget analysis, building consensus through an effective women’s caucus and the attributes and ethics of an effective legislator.  Experts included Member of the National Assembly in Nigeria Florence Akinwale; Member of the Parliament of Uganda Christine Bako; Deputy Director of the Education and Training Program in the South African Human Rights Commission, Nazli Howa; and former Florida state legislator and current Vice Mayor Leslie Waters.

A manual entitled “Southern Sudan Legislative Assemblies: A Legislator’s Guide to Gender Politics” was produced for the participants to utilize as a roadmap to make a genuine impact on the policies formulated, debated and passed by their respective legislatures.  The manual drew from experiences of WDN’s members from around the world including Afghanistan, Bolivia, Bosnia and Herzegovina, Indonesia, Lithuania, Macedonia, Morocco, Peru, Serbia, Timor-Leste and Uganda. 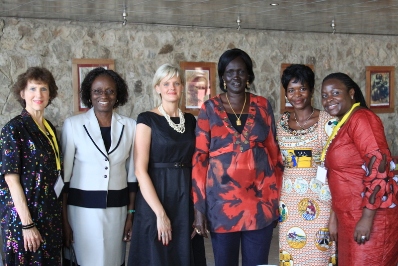 Participants also received a special video address by the Honorable Sonia Segura, a Member of Congress in Guatemala, who shared her experiences as a women legislator in a post-civil war society.  Besides offering valuable expertise and lessons learned, the trainers encouraged and inspired the Sudanese parliamentarians to reach their full potential.  The Honorable Christine Bako left participants with these words, “Better to be a rebel for doing something than an angel for doing nothing.”

During the final component of the conference, participants began to implement the tools they learned at the conference by engaging in strategy planning sessions for the upcoming sessions of the SSLA.  Small groups were formed and the participants developed the white paper “The Way Forward for the SSLA Women’s Forum; Utilizing the Women’s Caucus, Legislative Agenda and Partnerships to Effectively Govern.”

Key recommendations from the strategy sessions included the need to:

Recommendations from the conference are being used to define IRI’s Sudanese women’s programming for the next year.

An additional highlight from the conference included an address by guest of honor Mrs. Rebecca Okwachi, widow of the late leader John Garang, first Vice-President of Sudan and the President of the GOSS who signed the 2005 Comprehensive Peace Agreement which ended the decades-long civil war.  Ms. Garang encouraged the participants to strive to be effective legislators and to rally together to effect change.