I served as a party poll agent for my political party for the first time in 2006, during mid-term elections here in the United States.

I was given the assignment the day before Election Day, was told to sign a form registering me as an official party poll agent, and told to show up at my assigned polling station before the polls opened and not to leave until all of the ballots were counted and results posted.  I had no training to fulfill my newly assigned role. In fact, I didn’t even know that partisan election observers existed prior to that day-before-Election Day in November 2006.

In the time since, I’ve come to learn that party poll agents play a critical, if not well known, role on Election Day (note: discussion of party poll agents here also includes independent candidate agents, who serve the same purpose).  First and foremost, they serve as a deterrent and safeguard to electoral fraud, as do their non-partisan observer counterparts; when there are eyes on the process, it’s much harder and more risky for anyone to commit electoral fraud. Second, they have a vested interest in the process, as they protect the interests of their parties or candidate at polling stations by calling attention to irregularities, intentional or unintentional, small or large, by reporting them. Similarly, by certifying that no irregularities were observed, party polling agents instill confidence in the electoral process for their parties, win or lose. Finally, by being present for ballot counting, party poll agents can send immediate word to their parties about the vote count; when combined with reporting by their colleagues, parties and candidates can discern their performance on Election Day, sometimes well in advance of official result reporting.

I’ve also come to learn that I wasn’t alone in being assigned to serve in this role without any knowledge of my rights, roles and responsibilities. The world over, IRI finds that the sheer number of polling agents that candidates and political parties need to deploy on Election Day often makes it difficult, if not impossible, for political parties and candidates to finance and coordinate training them. In environments where there is limited experience with or understanding of electoral processes and electoral laws by citizens, parties and even election officials; where there is doubt in the integrity of the electoral process; and where lack of confidence in or uncertain results may cause unrest or even violence, party poll agents are even more important. In circumstances like this, well trained party agents who know what to observe and what to look out for and who know the proper avenues for reporting to their parties, serve as agents of stability and build sorely needed confidence in the electoral process.

In the two weeks ahead of today’s national elections in Uganda, IRI, with funding from USAID, trained nearly 2,000 poll agents representing the range of parties and candidates, in every region of the country, focusing additional attention to districts that were identified as potential “hot spots” for violence. Additionally, IRI printed 20,000 copies of a manual for party poll agents that were distributed by training participants to their fellow poll agents. 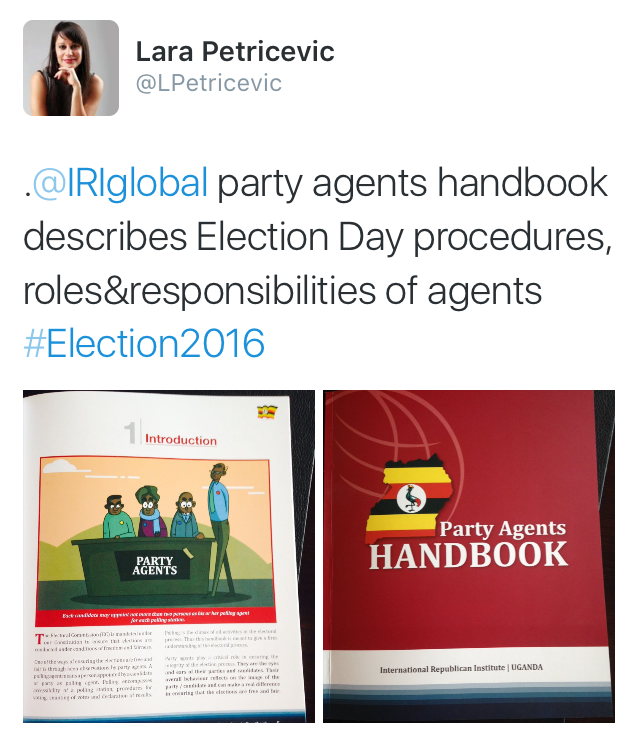