For Austria’s Mainstream: One Catastrophe Avoided, One More Still to Come

The news from Austria on Sunday was actually about what didn’t happen:  Norbert Hofer, the candidate of the right-wing Freedom Party of Austria did not win the re-run of the country’s elections for president.  In fact, he didn’t really even come close.

If it seems like you’ve already read about one Austrian presidential election this year, you are correct.  The people of Austria first went to the polls in two rounds back in April and May of this year, and elected Alexander Van der Bellen, an independent candidate running with the support of his Green Party, the Social-Democratic Party of Austria, and a mélange (this is Austria, after all) of individual supporters from other parties.

But Van der Bellen’s margin of victory was ever so narrow:  just 30,863 votes out of a total of almost 4.5 million votes cast, and was delivered largely by his huge win among voters who used mail-in ballots.  Frustrated by the loss, Hofer’s FPÖ in June lodged a complaint about irregularities in the ballot counting process in some precincts and in July the Constitutional Court sided with the FPÖ and declared the election invalid, setting up a re-run of May’s second round pitting Hofer against Van der Bellen one more time on October 2.

On September 12, however, the federal minister of the interior announced a delay in the re-run – this time to December 4 – because the glue on the ballot envelopes was found to be faulty, a situation the press immediately dubbed “Gluegate.”

With the date finally settled, both Hofer and Van der Bellen proceeded with their respective campaigns amid a general sense that momentum seemed to be with Hofer, as it appeared to be with outsider, anti-establishment candidates across the transatlantic space, including the victory of Donald Trump in the American presidential elections on November 8. 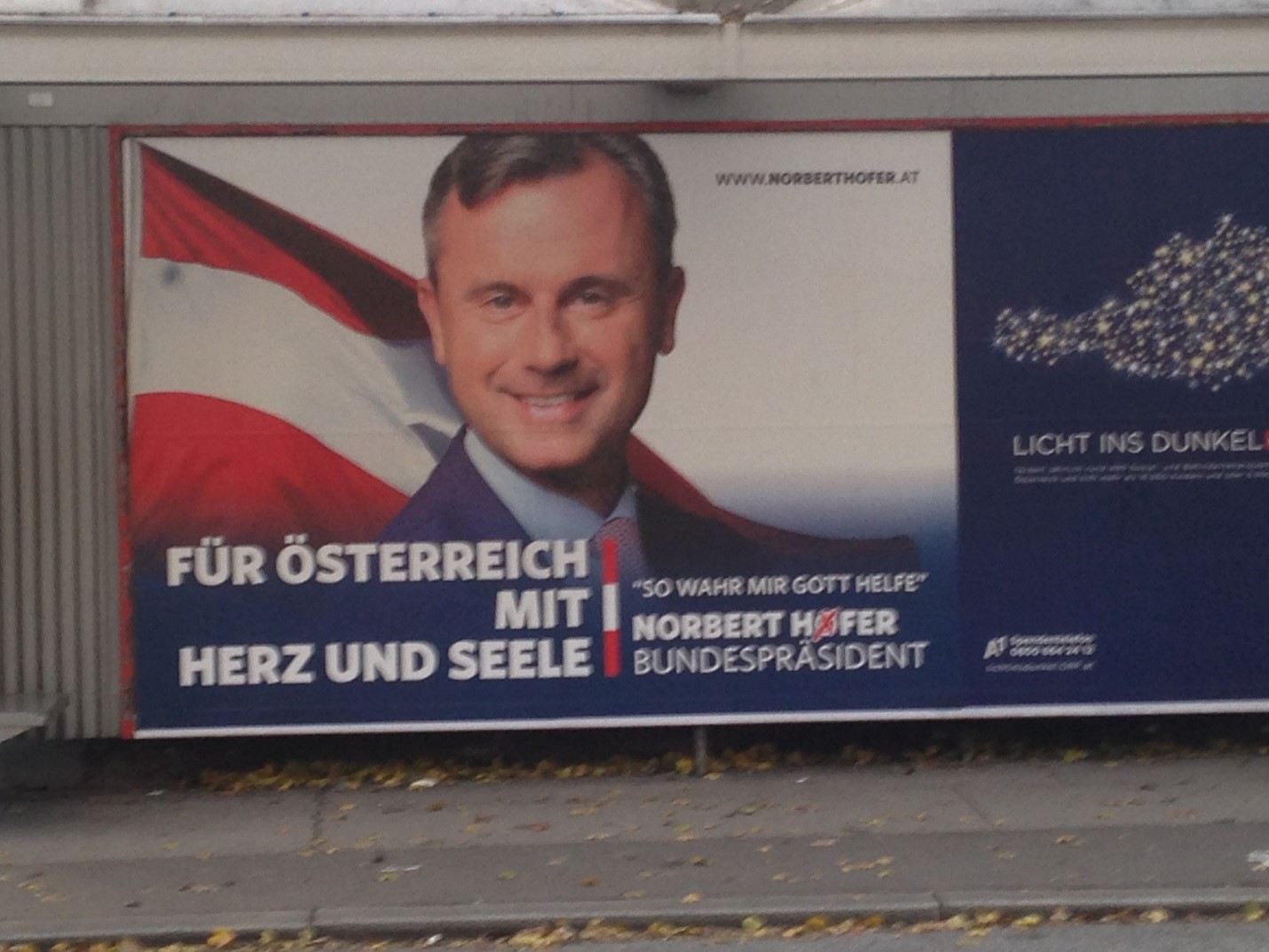 Neither candidate ventured much from predictable messages in his campaign.  The Hofer camp took a traditionalist, patriotic tone:  “For Austria with Heart and Soul:  So Help Me God.”  And Van der Bellen’s team portrayed him (already) as a statesman – the choice that would protect and defend Austria’s reputation abroad.  For many more highly educated urban voters, this was important, as they well remember Austria being ostracized in the international community in the wake of Kurt Waldheim’s election as president in the 1980s.  Billboard slogan:  “For Austria’s Reputation in the World.” 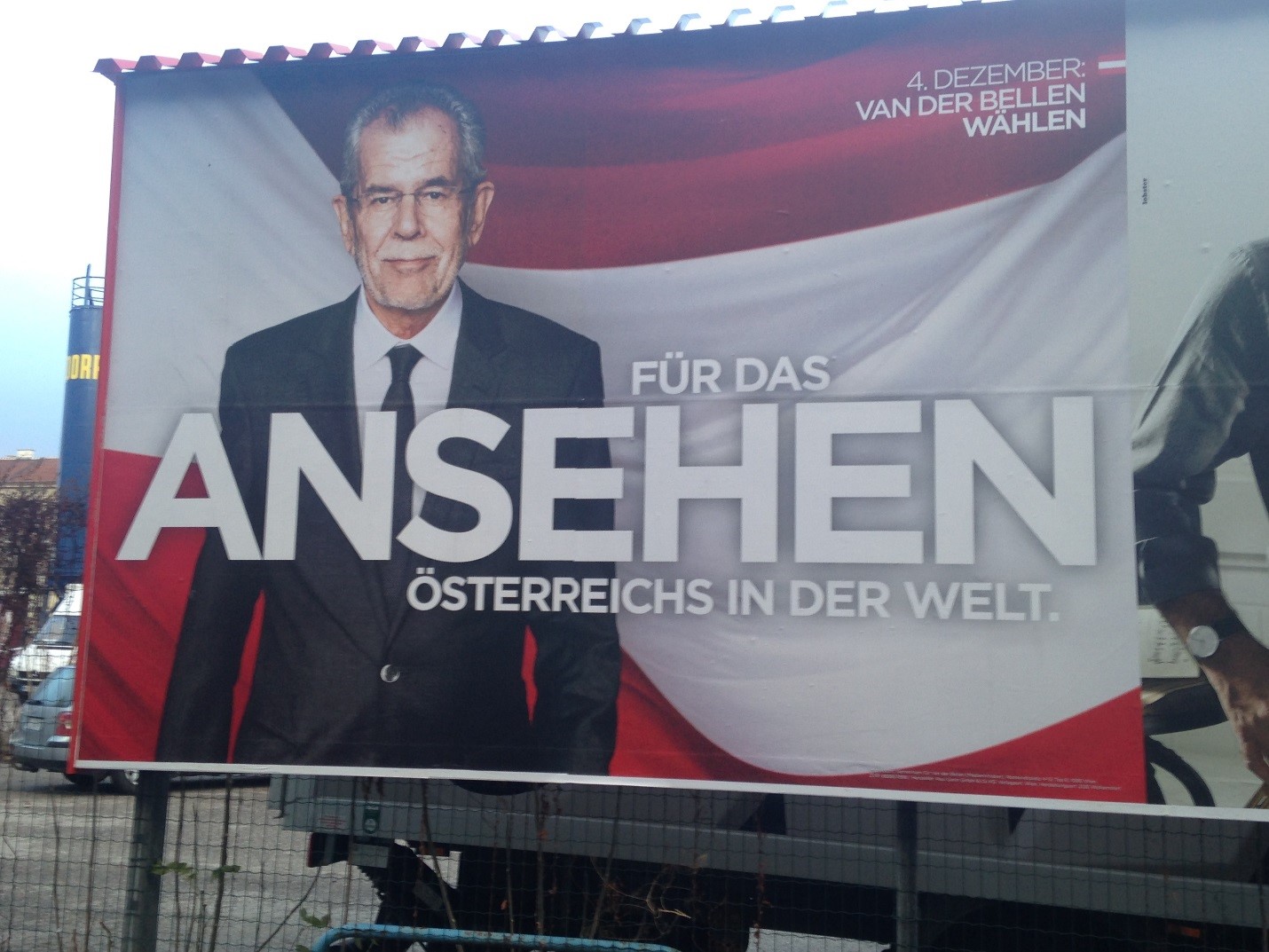 Given the certainty that Austria’s center-left electorate was solid in support for Van der Bellen, his campaign in November worked hard to make him more acceptable on the center-right side of the spectrum – particularly among supporters of the Austrian People’s Party (ÖVP), which was split over his candidacy, with many drawn toward Hofer and the FPÖ.

And so Van der Bellen turned up in traditional Austrian dress at festivals and events around the country that have usually not been much frequented by the typically more urban and urbane Greens.  And although this might seem awkward at first glance, Van der Bellen’s policy positions are not entirely out of line with some on the center right, for example on free trade, of which he is a supporter.

In the end the result was nowhere near as close as it has been in May.  Van der Bellen soundly defeated Hofer by a margin of 53.79 percent to 46.21 percent, and Hofer conceded defeat quickly after initial data came in.  Analysis of the vote shows that Van der Bellen was able to mobilize a significant number of people who didn’t vote in May to come out for him this time around and even to pull some who voted for Hofer in May back to him this time around.

And so the march of the anti-establishment candidates in Europe was, at least in Austria and at least temporarily, slowed.  What comes next is unclear, but almost everyone expects early parliamentary elections in May or June of next year, and the FPÖ will be out to prove a point in the wake of this defeat.  The question, once again, will be this:  how will the mainline center-right and center-left react, and who will be their candidates at the top of the ticket.   Could ÖVP Foreign Minister Sebastian Kurz’ time be at hand?