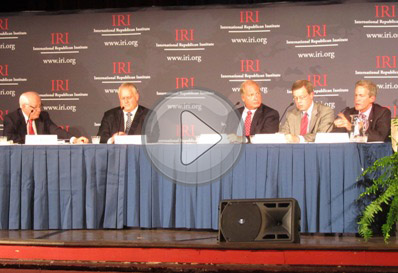 IRI hosted a panel of foreign policy experts who looked at the future of national security policy and challenges that the next presidential administration will face.

The panel discussed a wide range of foreign policy and national security issues including America’s leadership in the world, the need to support democracy promotion, and the importance of working with allies and multilateral organizations but to not be afraid to act when U.S. national security interests are threatened.  The panelists also discussed the U.S. role in supporting democratic change in the Middle East and urged support for those fighting Bashar al-Assad’s regime.  Panelists raised concerns about Iran, reminded the audience of the need for robust engagement with Latin America and discussed the role of a growing China.

The event was attended by international guests to the Republican National Convention including diplomats and world leaders.