From High School Activist to Government Minister: My 10-Year Journey through Bosnian Politics

I first became interested in politics and social change during high school. While most of my peers had no interest in such topics, I was reading about political affairs and watching political TV shows.

I got involved in non-governmental organization work as an activist, but I eventually realized that the only way I could make big, serious changes was to engage in politics myself — changing the system from the inside. So, I analyzed political parties that aligned with my views and before long, I was knocking on the door of the local branch of the Social Democratic Party (SDP) of Bosnia and Herzegovina (BiH). 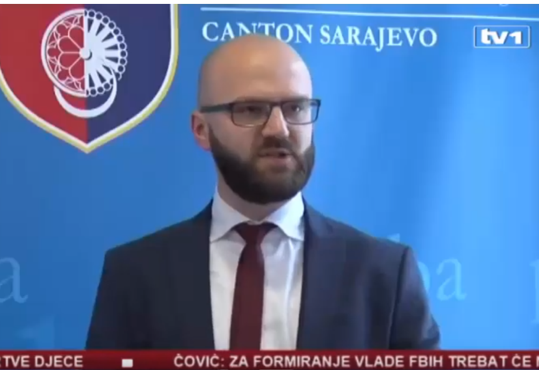 Ten years later, I was elected Minister of Labor and Social Care. I am currently the youngest minister in the Sarajevo government.

How did I get here?

Over the last 10 years, I’ve worked at every level of the party structure, from posting flyers and handing out leaflets to writing laws and lobbying at the highest level. I’m very proud of the group of peers I met through the party; we have spent thousands of project hours on programs benefiting both my country and party.

Then the 2014 election happened. It was a catastrophe for the SDP. We lost two-thirds of the votes we’d received in the previous election. A lot of people left the party at that point. But at the same time, people from all over the country reached out to us. They didn’t want us to give up. Many of them were young activists guided by ideals.

We didn’t know it then, but in the coming years, we were to usher in a radical rejuvenation of the party.

After the disappointing 2014 elections, the SDP began recognizing its youths and giving them the motivation and opportunity to run for office. As a result, a wave of young people was elected to the party’s leadership, all of them under 35 and relatively unknown to the public. More young people were elected internally to numerous local and regional organizations. By the time the 2016 local elections came around, 40 percent of those on our rolls were youths, and one-third of our elected councilors were under 35. The trend continued in the general election, which saw an unprecedented number of young MPs elected to office from the SDP.

And when three ministry positions opened up in the Canton of Sarajevo, I was appointed by the SDP leadership to become its youngest minister, helming the Ministry of Labor and Social Care.

My dedication and desire to change my country for the better have taken me far, but any advancement of young generations like mine is impossible without a parallel, informal political education. One of the most important components of my political education was the two-year Advanced Leadership in Politics Institute (ALPI) program run by IRI and CEPPS. I was fortunate enough to be selected for the first iteration of ALPI in BiH.

Most youth development programs bring together people from relatively similar political profiles, but ALPI was different. Through the program, I met young people from the entire BiH political spectrum and engaged with them to glean valuable knowledge, from debate tactics to insights on European integration processes. I realized that all parties have constructive, proactive and extremely capable young people who can be trusted to run this country — and do a better job of it than their predecessors!

I hope to prove myself worthy of the trust that has been put in me, but I also hope that my example will not be an exception. Rather, I hope it inspires a whole new constellation of young politicians who will bring to BiH new democratic standards and collaborative ways of working. I have no doubt that every one of my ALPI colleagues has it in them to do things differently, and to do them better.