From Sarajevo to the Big Apple: Young Bosnians Star in IRI-Magacin Kabare Film

When we talk about our work here at IRI, we usually discuss our latest public opinion polling or a roundtable event with government or civil society leaders that we just held – not a new documentary film. But this past year and a half, IRI has intersected paths with, dare we say it, Hollywood.

Roughly the size of Oklahoma, Bosnia & Herzegovina (BiH) is situated in the western-most pocket of Southeastern Europe. BiH has long found itself in the middle of regional and even global conflicts due to its location between several of the world’s historic powers, such as the Ottoman and Austrian-Hungarian empires. With this in mind, the stability of this small, multi-ethnic country is a major factor in stable European and Transatlantic security structures.

IRI has often sought to strengthen the democracy – and in turn the security – of fragile states by mitigating the effects of malign foreign influences or working to strengthen the capacities of legislative bodies or government ministries. But with re:Generation, IRI opted for an approach that was largely out of the ordinary.

With funding from USAID’s Bureau for Democracy, Conflict and Humanitarian Assistance, IRI recently partnered with Magacin Kabare, a Bosnian film collective, to create re:Generation. This documentary film follows the journeys of 10 young Bosnian leaders from 10 municipalities as they learn more about each other’s stories and exchange perspectives on the country’s conflict-ridden past with each other, government and civil society leaders, and war survivors.

Most of the film’s stars were too young to remember or were not even born before the three years that saw Bosnia & Herzegovina’s (BiH) three main ethnic groups – Bosniaks, Croats and Serbs – engage in vicious armed conflict. However, they most certainly still feel the effects of the early 1990s with the alarming level of tension between ethnicities in Bosnia. 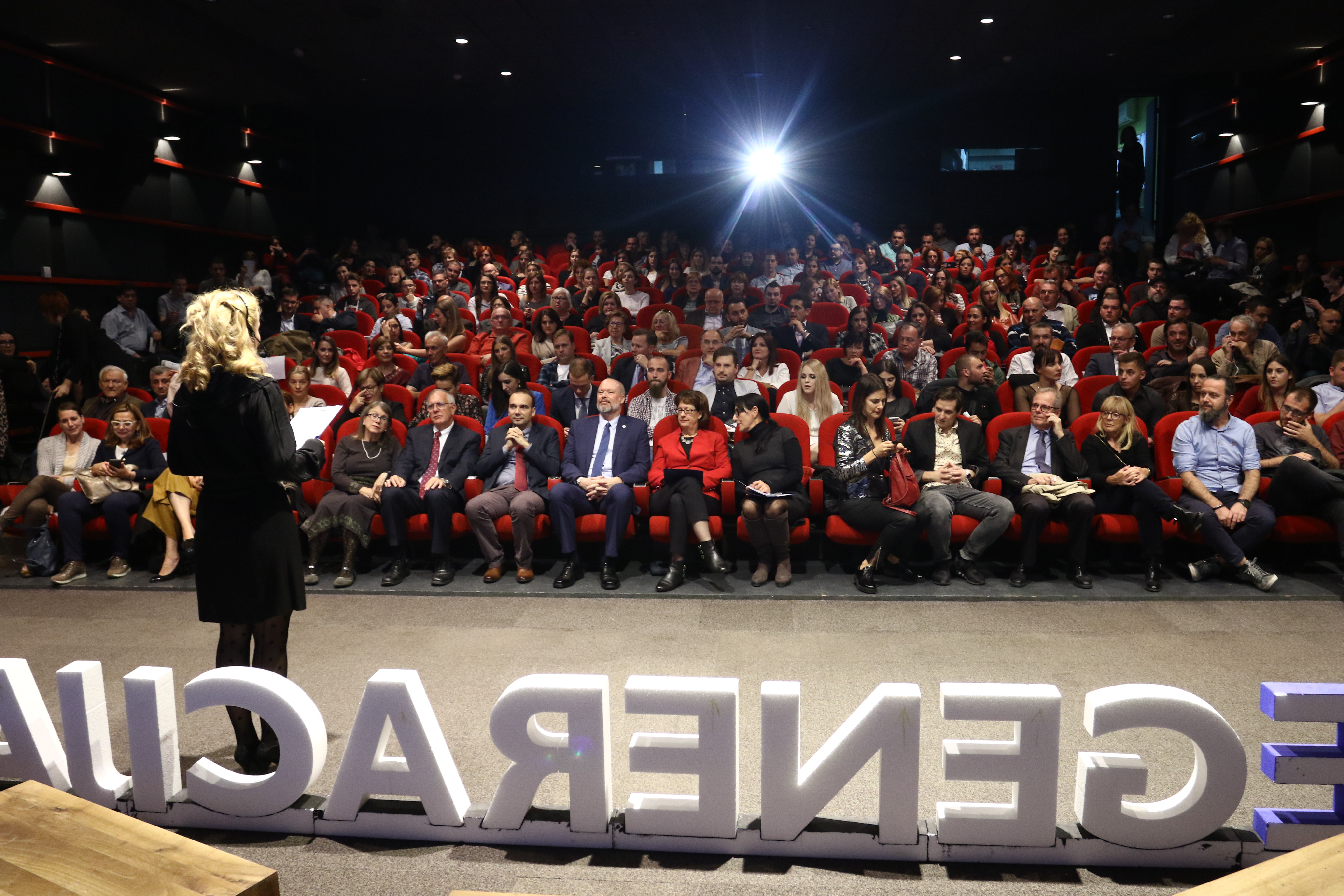 On October 18, IRI rolled out the red carpet and held the film’s first screening at the Meeting Point Theater in Sarajevo, BiH. The premiere was nothing short of high profile. Featuring opening remarks from US Ambassador to BiH Maureen Cormack, IRI Europe Regional Director Paul McCarthy and Magacin Kabare Co-Founder Emir Kapetanovic, the theater exceeded capacity with over 200 guests, including Swedish Ambassador Anders Hagelberg.

But the real stars of the evening were the 10 young Bosnians, affectionately known as Reconciliation Ambassadors in the film. Trekking to the Bosnian capital from all corners of the country for the big night, these young leaders captivated the hearts of the audience in a post-screening panel, where they shared candid thoughts on their experiences during filming and how they envision carrying re:Generation’s message forward in the future.

But the stories from the evening didn’t just stay put in the cinema—the event was covered in several Bosnian national media outlets and widely shared on social media.

Last week, six of the Reconciliation Ambassadors travelled to the United States with IRI and Magacin Kabare for two showings: one at the United Nations in New York City and one in Washington, D.C. 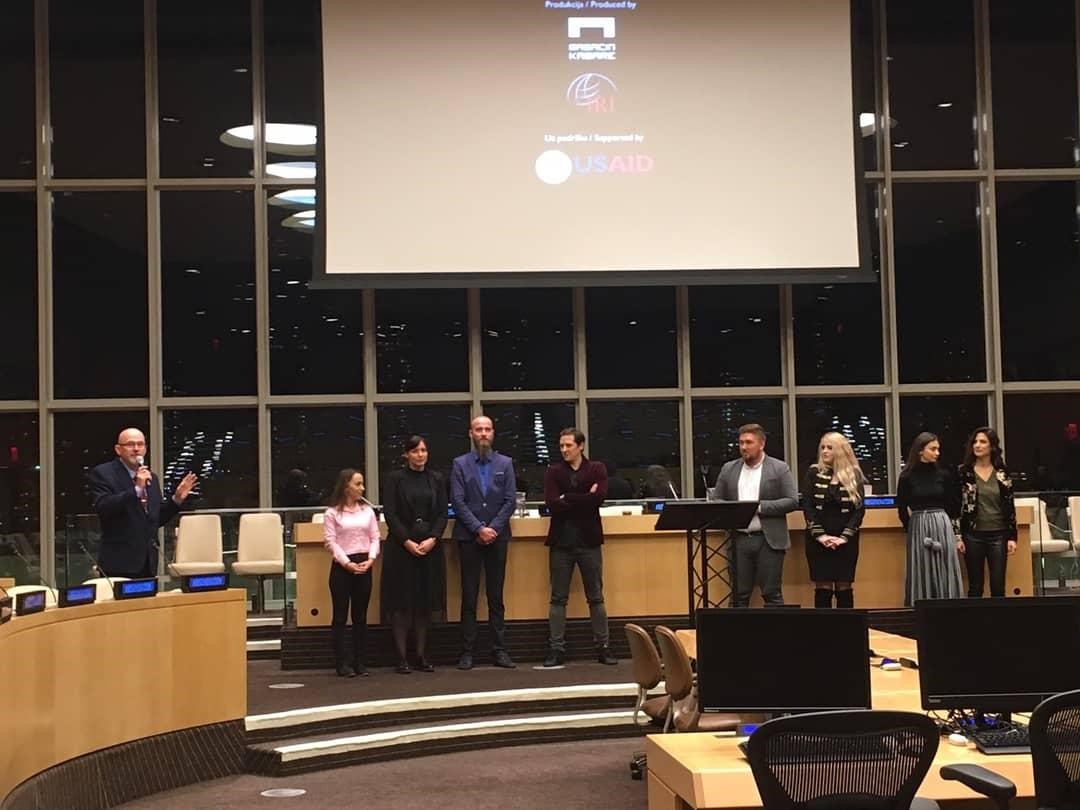 The permanent missions of Bosnia & Herzegovina and the U.S. hosted a screening at the United Nations last Tuesday. re:Generation made yet another major splash; 120 attendees, many from the Bosnian diaspora in New York, enjoyed opening statements from BiH Ambassador Ivica Dronjić and U.S. Deputy Representative Jonathan Cohen, and a panel discussion with the Reconciliation Ambassadors and Magacin Kabare.

Similar to the Sarajevo panel, the ambassadors discussed the filmmaking experience and the emotions unearthed during the reconciliation process. A unique point of discussion was when the young leaders shared stories of what exactly it was like to grow up in these starkly divided communities, including the experiences of attending completely segregated schools for some, which certainly captivated the audience. 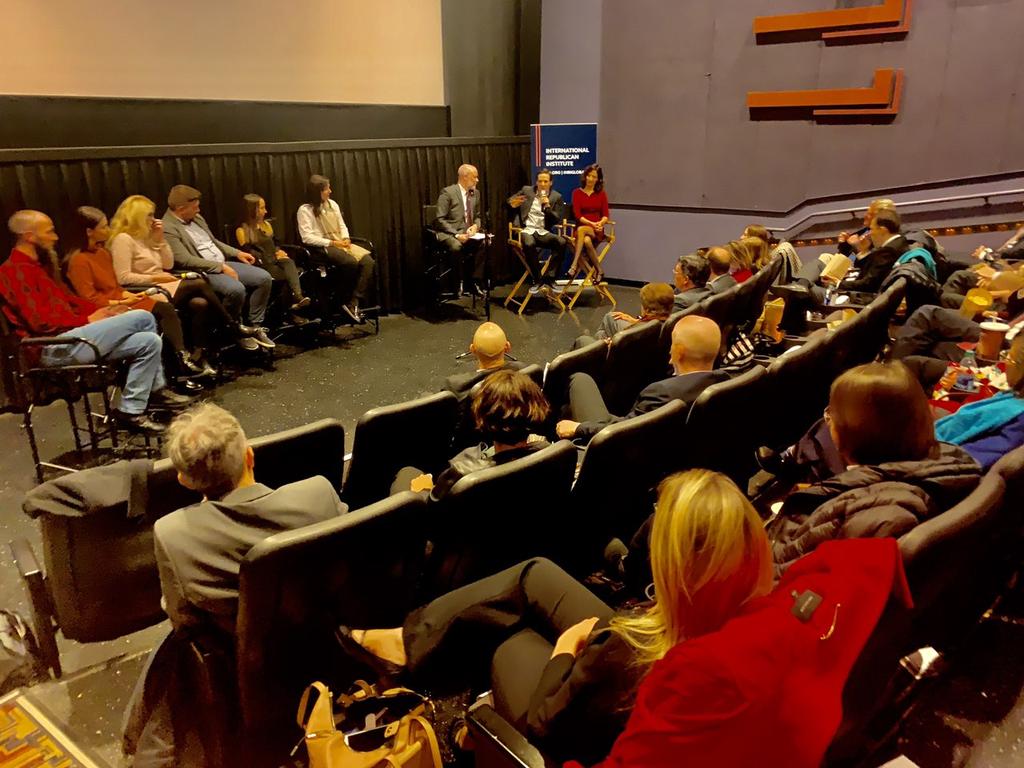 Though smaller in size than the previous premiere events, the D.C. screening gathered an impressive number of U.S. government representatives and foreign embassy officials, and was even covered by the Bosnian newspaper Oslobodenje. But what was most special about this night was that no one wanted to leave. The majority of attendees, including high-level U.S. government representatives and foreign embassy officials, stayed for a celebratory reception at the theater, where they were able to exchange stories with Reconciliation Ambassadors and learn more about the project from IRI staff.

All in all, the true reach of re:Generation is yet to be seen; 13 more screenings are planned in towns and municipalities all across BiH. Judging by these three smashing successes, this seems to only be the first page of a captivating story of young people choosing to defuse ethnic tension in their communities.