On April 4, IRI published its most recent survey of Georgian Public Opinion (posted here), the 23rd such poll that IRI has conducted in Georgia since May 2003.

More importantly perhaps, this is the first poll published since the European Parliament formalized regulations to grant Georgian citizens visa-free travel to the European Union on February 2, 2017, which came into final effect with formal publication on March 28, 2017.  This is a big step forward for Georgia, which formally signed an Association Agreement with the European Union in June 2014, and which entered into force in July 2016.  Georgians have had high hopes for the Association Agreement and the visa-free regime, as it marks a clear commitment from the European Union to Georgia’s progress toward Europe; a direction supported by 90 percent of individuals polled (see IRI.org). 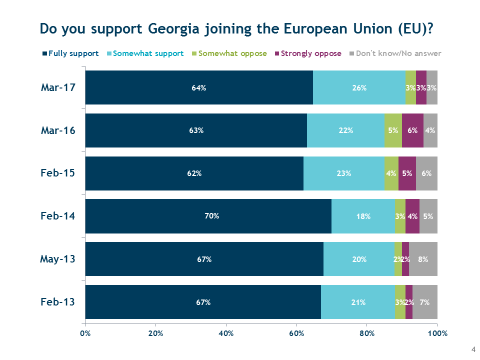 Perhaps one cause of the continued positive attitudes toward Europe – concerns over Russia remain high, with 73 percent considering Russia the greatest political threat to Georgia, and 57 percent considering Russia the greatest economic threat.  Despite this, Georgians seem to have an abiding interest in being good neighbors with all their neighbors. In fact, 82 percent of Georgians continue to recognize the sheer practicality of having neighborly relations with Russia (see IRI.org). For that matter, Georgians believe the country’s best partners after the European Union and the United States to be Azerbaijan and Ukraine. 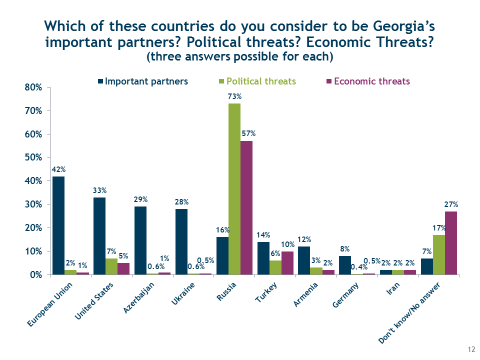 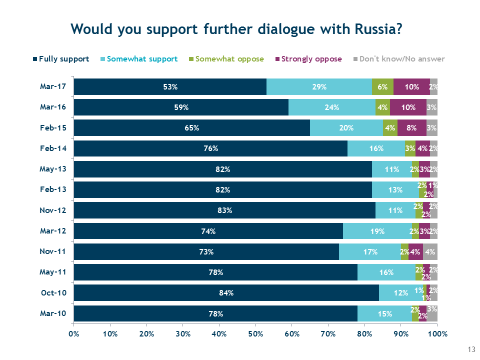 At the time of this publication, it is still far too soon to see what sort of economic impact visa-free travel will have on Georgians.  It is certainly possible that tangibly closer ties to the European Union will diminish the desire to remain friendly with Russia, but it seems unlikely. Unlike most of the former Soviet republics, Georgians tend to be an optimistic people as a whole, and do not see relations with Europe and Russia as a zero sum game in which one must suffer in order to enhance the other. IRI’s next poll will hopefully provide a better picture of the initial results when it goes to the field in a year’s time.  Currently however, there is little reason to think that Georgian’s attitudes are likely to change in the short term.