In our sixth episode of “Global“, we are talking with the Chairman of the American Academy in Berlin Gahl Burt, and IRI Regional Director for Europe Jan Surotchak.

Here’s our behind-the-scenes blog with related media and some fast facts.

Q: Could you tell me more about podcast guest Gahl Burt?

A: Ms. Burt started her career in the civil service at the US State Department in 1973, where she served as personal assistant to Secretary of State Henry Kissinger, and then Assistant Chief of Protocol until 1983. In 1983, she became White House Social Secretary to President and Mrs. Reagan, and served in that post until 1985 when she moved to Germany where her husband was US Ambassador. Check out this photo of her sitting on the stage of the “Tear Down This Wall” speech. 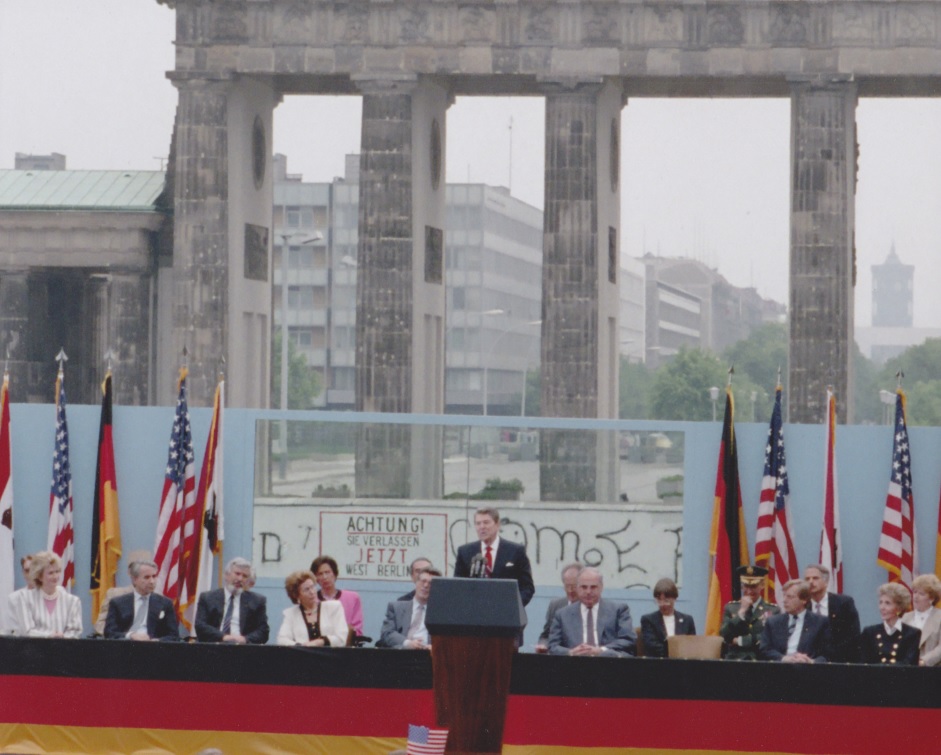 Q: Where can I find President Reagan’s “Tear Down this Wall” speech?

Q: What exactly were the Two Plus Four negotiations and why were they important?

A: The Two Plus Four Talks were pivotal to German reunification, as they brought the two Germanies (West and East) to the table with the occupying victorious powers (the United States, United Kingdom, Soviet Union and France) to arrive at an agreement that would supersede the various treaties put in place after World War II.   The parties to the negotiations signed the Treaty on the Final Settlement with Regard to Germany in Moscow on September 12, 1990, thus formally opening the door to full reunification of Germany on October 3, 1990.

Q: Gahl mentions the Red Army Faction and the “Stasi” or secret police, what exactly are these two entities?

A: The Red Army Faction (RAF), also known as the Baader-Meinhof Gang in its early stages, was a West German far-left terrorist group supported by the East German Ministry for State Security, commonly known as the Stasi. The RAF engaged in a series of bombings, shoot-outs, robberies, assassinations, and kidnappings, with the height of its activity being in 1977.  The West German government designated the Red Army Faction as a terrorist organization.

Q: Jan mentions the Marshall Plan’s 30th anniversary and the Rome Treaties, what were these plans exactly?

A: The Marshall Plan, officially the European Recovery Program or ERP, was an American initiative to aid in the post-WWII economic reconstruction and revitalization of Europe, through which the United States provided $13 billion in economic support to both former allies and former enemies in the war that had just concluded.  The plan was in operation for four years beginning in April 1948 and formed the basis for the peaceful, democratic development of the Western half of the continent.

The Treaty of Rome established the European Economic Community on January 1, 1958. It was signed on March 25, 1957, by Belgium, France, Italy, Luxembourg, the Netherlands and West Germany. It remains one of the two most important treaties in the European Union today.

Q: Jan gives a lot of insight and knowledge to this podcast, can you tell me more about him?

A: Jan is currently our Regional Director for Europe and has been with IRI since 1994.  In this position, he oversees IRI programming across Europe, including in the Baltic States, Central and Southeastern Europe and Turkey.  He also leads our outreach efforts to partner parties in Western Europe and institutions at the European Union level. You can read his full bio HERE.