It’s not often that people get excited about government budgets, especially citizens.

Often it requires someone with a background in finance and accounting or an extremely engaged citizen to get into the nitty-grittiness of budget allocations and keep track of multiple planning and approval processes. So how do you get average citizens interested in the “boring” but critical issue of budget allocations and increase their participation in the budget processes? If you want citizens to have the ability to mobilize around budgets, focusing on simplifying and personalizing the content of the budget information by addressing issues that matter most to citizens will allow them to leverage opportunities to access and utilize that information.

At a first glance, government transparency in Mongolia has improved quite significantly in recent years. With implementation of Glass Accounts Law in 2014 and the Information Transparency and Right to Information Law in 2011, concerned citizens can access budget information and decisions on the main Glass Accounts website and request relevant information through a set formal procedures. This website eliminated a substantial number of steps and the laws provided the legal framework necessary for citizen and civil society-led oversight of government actions. Furthermore, through the Local Development Fund (LDF) initiative begun in 2012, which supports sustainable and equitable local development, citizens became empowered to voice their needs though participatory budget allocation processes.

Despite this progress, the execution and impact of these laws remain insufficient, particularly in areas of budget transparency. In addition to the lack of frequent updates on websites, available budget documents are often irrelevant to citizens and developed without providing the necessary context. The information made available requires extra efforts by citizens to get a full understanding of budget issues in their areas and the internet-only dissemination makes the information inaccessible for citizens with limited internet connectivity. Thus, even with myriad of budget information available, without ensuring their full accessibility in both content and delivery, citizens will continue to remain in the dark and unable to participate meaningfully in the budget processes.

With an aim to tackle this challenge, IRI partner, Standard Solutions and Monitoring Center (SSMC), developed Citizens Budget infographics on LDF spending in Bayanzurkh district in Ulaanbaatar. These infographics, which utilized publically available budget documents, presented district residents with key data and information on LDF projects in their district or khoroo, the smallest administrative unit in the capital, through user-friendly, simple analyses of completed infrastructure projects and current and future spending. More importantly, one of the infographics highlights LDF planning and reporting dates in order to remind residents when and how they should participate in the LDF budget allocation prioritization processes. These infographics effectively resolve the problem of inaccessible budget information and increase citizen

engagement in budgets by exposing issues that are of most concern to citizens and emphasizing processes that require their active participation.

Since the development of the infographics, SSMC has carried out numerous advocacy activities with their Citizens Budget infographics and have received positive feedback from both residents and local officials. SSMC has distributed printed versions to khoroos within Bayanzurkh district where any resident, irrespective of their ability to access the internet, can obtain them. Equipped with this information, Bayanzurkh district residents are better able to make well-informed conclusions on budget issues that directly impact their lives and can be prepared to respond and demand changes to decisions of their local government and elected officials. 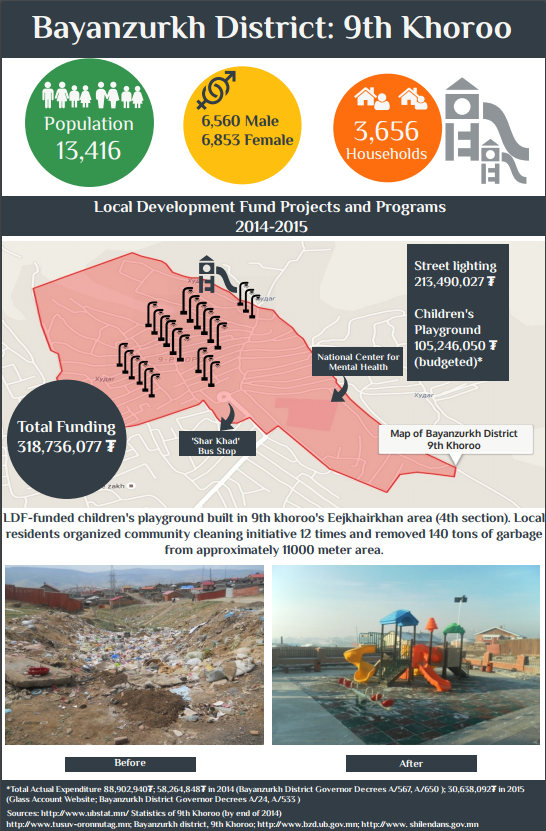