Though El Salvador is not a partner legislature of HDP, the country’s Legislative Assembly has participated in a series of virtual exchanges between the Congress of the Republic of Guatemala and the United States House of Representatives. In response to the challenges COVID-19 poses to democracy, IRI and HDP are facilitating discussions with lawmakers to support them in overcoming pandemic-related obstacles that might stymie their democratic progress. The Honorable Anabel Belloso participated in one of these virtual discussions and gained insight on a legislature’s role in the oversight of the Executive branch during times of crisis. 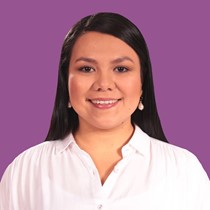 I am a member of the Legislative Assembly of El Salvador.

I participated in a virtual bilateral discussion entitled “Maintaining Legislative Authority During a Crisis” with other legislators from Guatemala and the United States. It was a collaborative meeting on the challenges and strategies related to anti-corruption and oversight.

The character and courage of our people, as well as their determination to overcome difficult moments, is my favorite aspect of my country. Our struggle has allowed us to establish our democratic process and advance the importance of human rights.

As a young woman, I considered it important to take action and influence decision-making in my community and in my political party. In a country with a predominantly young population, I consider it essential for youth to participate in the creation of public policies, laws and initiatives that respond to the Salvadorans’ aspirations for a better country.

Knowing the experiences of other countries allows me to have more information, compare situations and identify what aspects and elements can be written into Salvadoran legislation.

Knowing how legislators in other democracies exercise their function of checks and balances is important given the current context of my country. By knowing them better, I can take their good practices and apply them to my legislative work.

It is important to promote the initiatives that are important to, and supported by, citizens so they feel their feelings and aspirations are represented. One should also maintain respect for the diversity of thoughts, since that is the strength of the democratic process. Finally, the protection of guaranteed rights to the entire population, without exclusion, is essential.

I am most proud of my support of a law that guarantees the right to property of thousands of Salvadoran families, getting the approval of funds for a new national hospital, voting to support water and sanitation as human rights, and presiding over the Youth Parliamentary Group, which supports initiatives for the benefit of Salvadoran youth.