The House Democracy Partnership (HDP) is a bipartisan commission of the U.S. House of Representatives that works directly with 21-partner parliaments around the world to support the development of effective, independent and responsive legislatures. HDP is proudly implemented by the International Republican Institute (IRI) and the National Democratic Institute.

Hon. Zoran Ilioski attended the HDP regional seminar, “Engaging Citizens in Building a Secure e-Society in Tallinn, Estonia” in November 2019. The program, which included members of parliament from Armenia, Georgia, North Macedonia and Ukraine, was part of a larger HDP IRI strategy to increase e-Governance capacity in Europe and Eurasia. E-Governance, a modern way to enhance transparency, allows governments to better connect the state with its citizens. In turn, this enhances the efficiency of public service delivery and provides governments the tools to improve transparency. 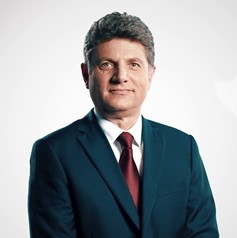 I was a Member of the Assembly of the Republic of North Macedonia for two terms from 2014 to 2020.

I participated in a regional study tour held in Tallinn, Estonia in November 2019, with a focus on engaging citizens in building a secure e-society. I had the opportunity to participate together with my colleagues from North Macedonia, Armenia, Georgia and Ukraine.

[North] Macedonia has a great history and tradition and is a country where diversity is respected.

I was intrigued by the possibility of influencing the adoption of laws for a better life [for] my fellow citizens.

Through the program in Estonia, I learned someone’s everyday life can be simplified and aided by the application of new technologies. In order to do that, citizens must have trust in their government institutions. This can be achieved by involving citizens in the building and creation of an e-society.

As early parliamentary elections were being prepared at the beginning of this year, I transferred the experience I received from HDP into my party’s election platform.

They should be committed to the function they perform and not forget that they are elected by the people. They should also fight for laws and procedures to be observed in the legislature and society, and through that, they will contribute to the rule of law and strengthen the trust of the people towards the institutions in the country.

As a Chairperson to the Committee on Election and Appointment Issues, I organized a public call for applications of interested candidates who want to be appointed to public functions through the Assembly. After the completed interviews, which were conducted by the members of the Commission, a database of candidates was formed. Thus, the appointment process gained transparency and quality.