How Data is Bolstering Democratic Governance in Jordan

While all types of information is useful to locally elected officials, such as that gathered during town hall meetings with citizens, quantitative data is proving increasingly valuable.

Recognizing this, IRI contracted a Jordanian mobile technology firm in 2013 to design a custom platform for collecting citizen survey data from residents of cities and villages throughout Jordan. The app was named Baldytak, meaning “Your Municipality” in Arabic. This technology now serves local governments and citizens in myriad ways. Most importantly it provides local officials with quantitative information that can be used to inform decision making, ensuring the efficient allocation of scarce government resources. Before the launch of Baldytak, mayors, municipal councilors, and city staff had little to no numerical data on citizens’ priorities or attitudes, instead relying on anecdotal evidence collected through the course of personal interactions. While we should not discount the value of impromptu conversations between officials and citizens, these interactions are inadequate to accurately gauge the needs of all city residents. Relying exclusively on personal interactions yields inevitably low sample sizes and allow officials’ family, friends, and/or fellow tribe members to have disproportionate political sway. Baldytak assists in remedying this imbalance by providing all residents, regardless of background or personal connections (“wasta”) with an opportunity to share opinions with their local representatives and then track subsequent progress. 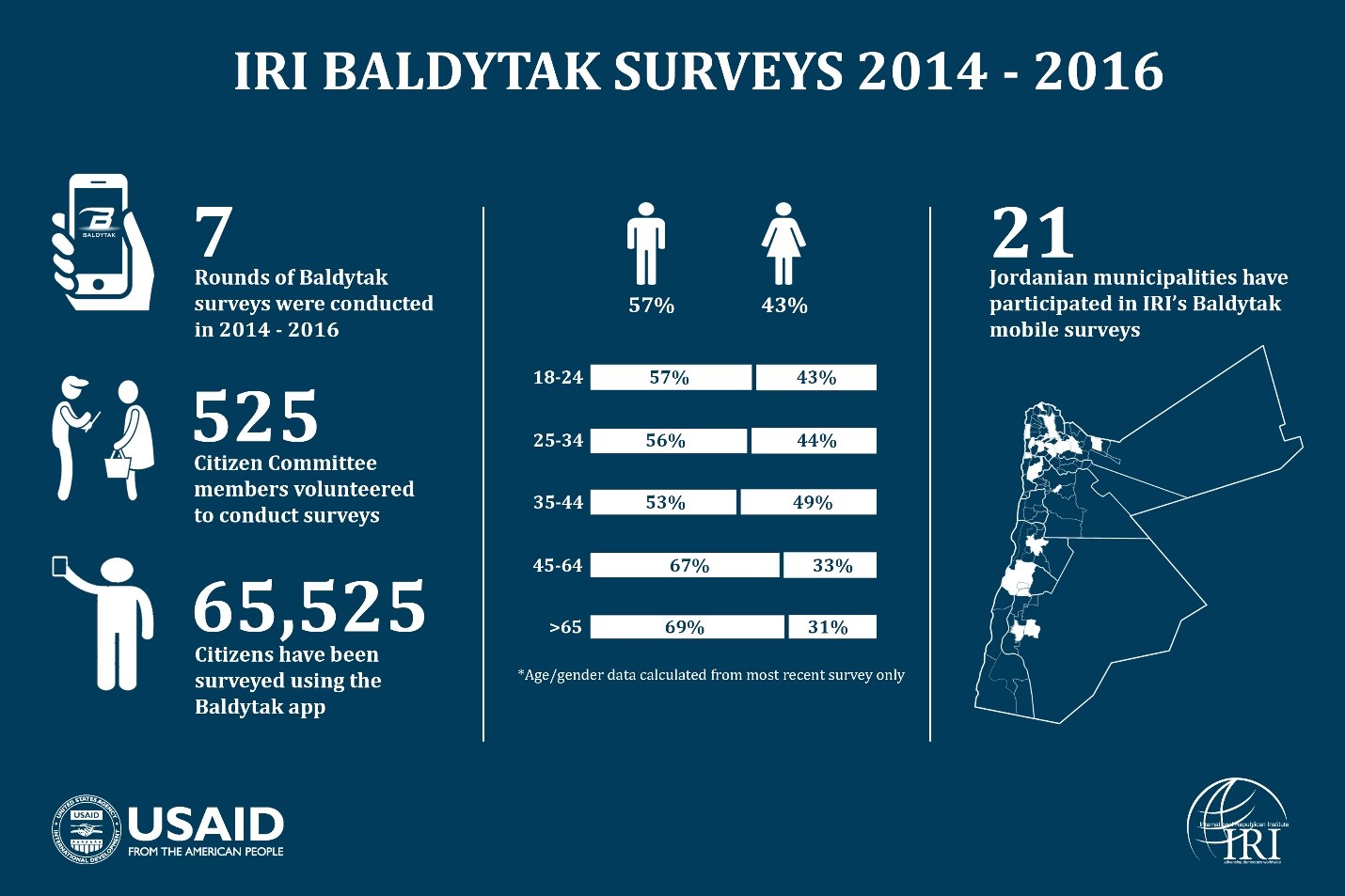 For the initial test of the new mobile app, the local activists that make up IRI’s Citizen Committees in Jordan used it to tabulate data collected before municipal elections in 2013. In the months preceding the election of mayors and municipal councilors, these committee members surveyed their fellow residents about which issues they wanted candidates to address, such as improving roads, city cleanliness, street lighting, or local parks. IRI then printed large pledge cards listing citizens’ top three concerns for each of the nine municipalities in which Baldytak was first utilized. Next, IRI and Citizen Committee members approached mayoral candidates to sign pledges, thereby committing to tackling these issues if elected. Impressively, all the winning candidates had been among those who signed pledges, and were subsequently publically presented with their pledge cards once in office. To this day, many of the mayors prominently display the card at their respective city halls as a reminder of their continued commitment to serving their constituents. 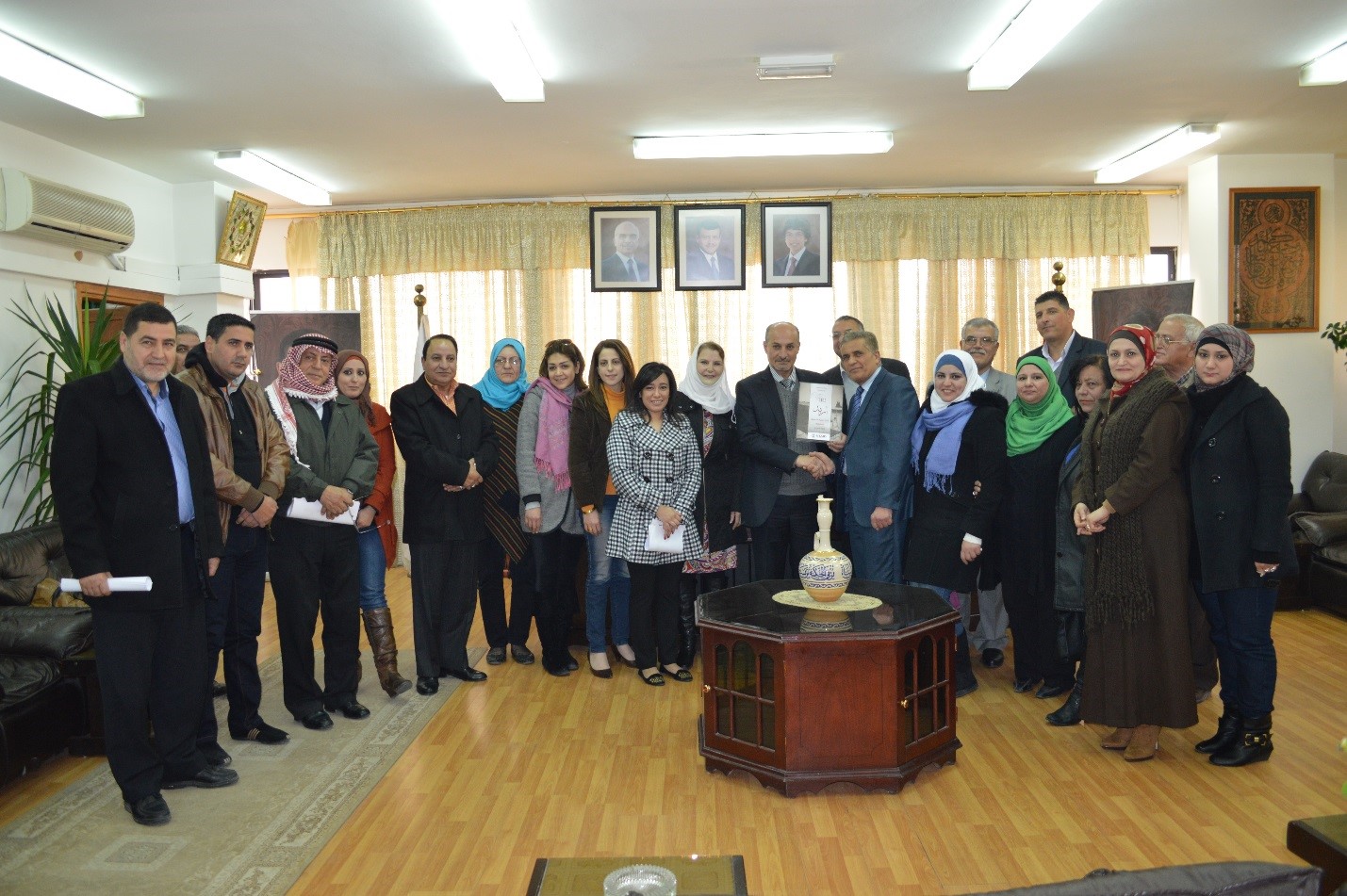 Since this initial proof of concept, IRI has successfully helped municipalities pivot the app from a campaign season tool to an ongoing program dedicated to bolstering the democratic governance of Jordanian cities. From 2014 to the present, IRI’s Citizen Committees have conducted seven rounds of surveys within a total of 21 municipalities—collecting a staggering 65,525 individual surveys. Citizen Committee members are of various ages, professional/academic backgrounds, and from different city districts. In addition, they make a concerted effort to collect surveys at many types of locations, such as public markets, universities, associations for youth, women and/or persons with disabilities, and even door-to-door at homes. It must be noted that unlike traditional polling, these surveys are not scientific; however due to the large sample sizes and the diverse backgrounds and collection sites utilized by committee members, the data appears to track very consistently with more formally collected data. 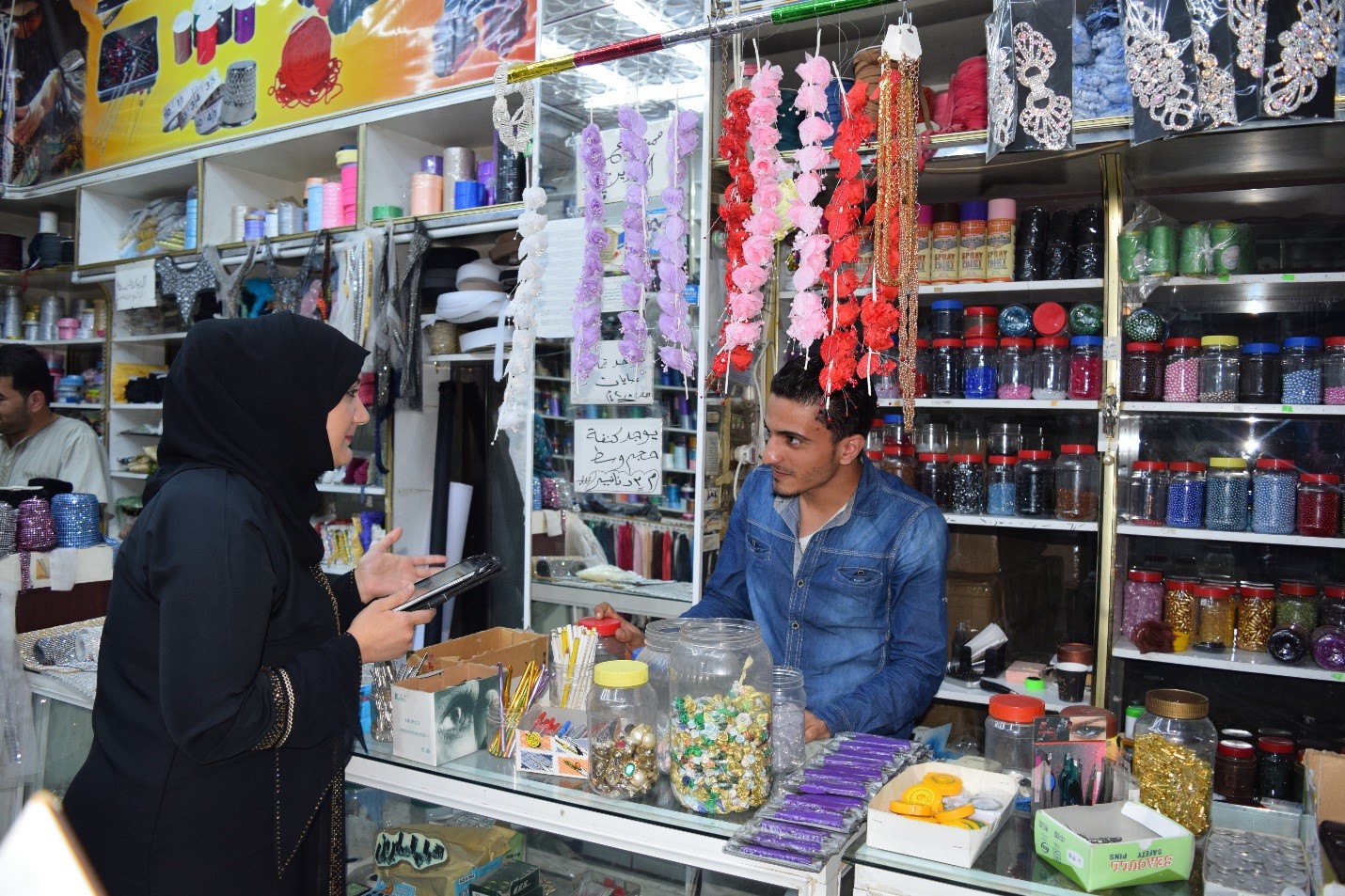 Before each survey, IRI reviews previously used questions among staff, Citizen Committee members and city officials to ensure each question remains relevant and actionable. Existing questions are given precedence to enable data to be compared across many surveys. However, questions are edited, added, and deleted when necessary, such as when it becomes clear that citizens are consistently misunderstanding a particular question. Next, IRI holds workshops to refresh the memories of Citizen Committee members on best practices for collecting surveys. During these workshops, members familiarize themselves with all the questions that will be asked, and participate in roleplay exercises to ensure questions will be asked in an unbiased manner. Afterward, IRI distributes two tablet computers—with the Baldytak mobile app preinstalled—to each participating Citizen Committee. On average, 16 Committees participate in each survey round. Committee members are also able to download the app to their own smartphone, IOS or Android, and conduct surveys that way if they prefer. In fact, anyone with a smartphone can download the app and, by doing so, can view aggregate survey results—immediately getting a snapshot of the sentiments of city residents from across Jordan. However, only trained members of IRI’s Citizen Committees have the logins required to input new data.

Next, IRI opens the survey collection period, usually lasting two weeks, during which time Citizen Committees collect thousands of surveys from residents of their respective cities. IRI staff electronically monitor the number of surveys collected on a daily basis throughout the survey period, following up with Committees that are at risk of not achieving their targets. Once the survey period closes, IRI immediately begins preparing the data collected for presentation to mayors, municipal councilors, city staff, Citizen Committee members, local residents, and any additional interested parties. This process—reviewing the results, creating presentations, and scheduling the required meetings—takes about two weeks, which is much faster than the time it takes to release traditional polling because the data is being immediately calculated on IRI’s cloud server. Reducing the lifecycle of the feedback loop between citizens and their local officials has proved extremely beneficial in convincing municipalities to buy into the results. Having never before seen city-specific, quantitative data, officials were initially hesitant to fully embrace the results, but because the presentation takes place so soon after the survey period, it makes it easier for city officials to accept how their work is reflected in the data. For example, if citizens express dissatisfaction with city streets, and city officials know that potholes caused by winter storms have not yet been repaired. Or if citizens note that city procedures/paperwork is being processed in a more timely way and city officials know they recently hired new administrative staff, it increases the respect local officials have for the data and encourages them to make the most of it.

Another notable achievement of the Baldytak survey program is the constructive atmosphere it provides elected officials and their constituents to discuss ongoing challenges and brainstorm possible solutions. Instead of discussions becoming personal due to all information being anecdotal in nature, now even difficult topics can be addressed by referring to numerical data projected onto a screen—not by referring positively or negatively to a specific official or experience. For instance, it is customary for a survey to ask how well the municipality keeps citizens informed about the city’s challenges, accomplishments, and budget. This question could easily make mayors defensive and dismissive of the data, but because the presentation focuses on the how the numbers are trending instead of the personal characteristics of the mayor, a thoughtful conversation can take place about improving outreach to residents. 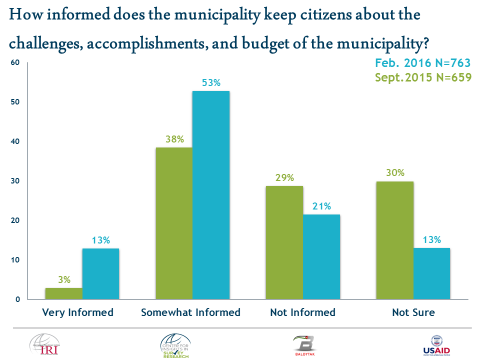 During one presentation, a heated exchange occurred when a municipal councilor was unhappy with the results of a certain survey question. He complained loudly that no one from his district had been surveyed, insisting therefore that the results must be inaccurate. During his outburst, IRI staff connected to www.baldytak.com and pulled up a map of the GPS coordinates for every survey conducted in the city. The resulting map revealed that multiple surveys had taken place not only within the district he represents, but even on the street where he lives. Everyone in the room immediately recognized the councilor’s neighborhood on the map and he became a convert to the Baldytak program. Though only site administrators have access to this GPS data, anyone can visit the website (in Arabic or English) to review the results of every survey ever conducted. Significantly, anyone can sort the data by governorate, municipality, district, age, gender or question—providing an excellent resource for citizens, governments, and researchers. 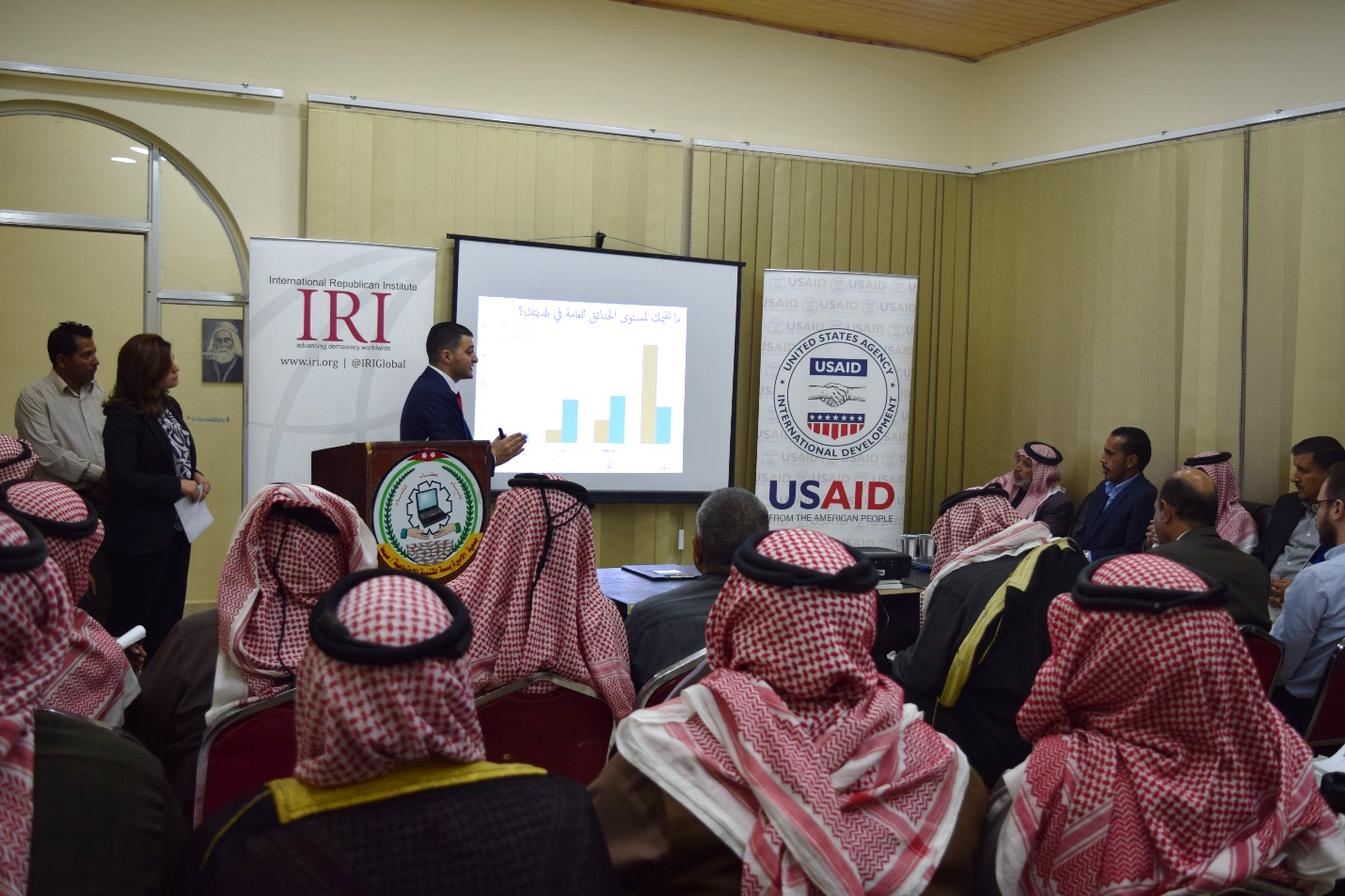 Following the presentations, IRI provides each city with their results in hardcopy and digital form (in Arabic and English) to facilitate the further dissemination of the results. Often, cities publish the results in their municipal newspapers, tack them to the city hall bulletin board, post them on the city’s Facebook page, project them during town hall meetings, or share them with guests who visit the municipality.

IRI’s local governance work does not end once the data has been collected and presented—it is just the beginning. We then use the results to nudge our partners toward tangible actions that improve citizen engagement and satisfaction with their municipality. IRI has partnered with 31 Jordanian municipalities to conduct scores of local governance initiatives designed specifically around the issues citizens care most about. These initiatives include, but are not limited to: assisting cities in holding town hall meetings or installing citizen suggestion boxes to augment citizen outreach and information sharing; organizing city beautification events to improve city cleanliness (IRI organized 29 such events for Earth Day 2016 alone); replacing burned out street lights; creating a reusable shopping bag program to reduce the amount of plastic in city landfills; and conducting capacity building workshops for city department managers to improve the provision of municipal services to residents. IRI, citizens, and municipal officials all realize the outcomes of these efforts require time to permanently take root but real progress is being made—and thanks to the Baldytak app, it is even being measured.