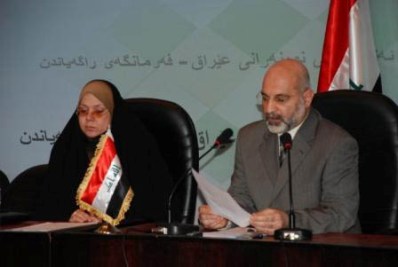 In recent months the Iraqi Federal Court has made a number of controversial decisions believed by many to be inappropriately strengthening the executive branch of government.  In a January 18 interpretation of the constitution, the Federal Court placed independent government agencies such as the Central Bank and the Independent High Electoral Commission under the direct control of the executive branch.  The court’s ruling cites ambiguous language from Article 80 of the Iraqi Constitution in support of its decision, but doing so conflicts with other explicit constitutional provisions.  This came on the heels of a ruling in July barring Parliament from introducing bills, instead only allowing new laws to be proposed by the Prime Minister’s cabinet or the President.  These decisions have caused alarm in Iraq, where memories of Saddam Hussein’s authoritarianism are still fresh and many fear the return of an unchecked executive.

On January 29, 2011, IRI held a roundtable of legal experts, parliamentarians, and two members of the Iraqi Federal Court to discuss these controversial decisions.  Many roundtable attendees voiced concern that the court’s impartiality may have been compromised because of these recent decisions, and that the court lacked the constitutional authority to rule on such cases.  Allowing that certain decisions may have been reached too quickly, Judges Sami al-Mamoor and Salem al-Mosiwi came to a measured agreement with other members of the roundtable.  They suggested that should a case be filed in the Federal Court against the questionable interpretations, they could be reversed.

The roundtable participants then agreed to a detailed list of recommendations, including a request for a formal clarification of the court’s position on the constitution’s provisions for independent agencies, filing a case to reverse the court’s prior interpretation, and passing a law to better govern the Federal Supreme Court.  Participants agreed to distribute their recommendations to legislative, executive and judicial authorities around the country.

In the following days, Iraqi Member of Parliament Dr. Ala’a Maki, a participant at the IRI roundtable, relayed the recommendations of the roundtable to the parliament.  The story was quickly picked up by Iraqi media and the court soon found itself under intense public scrutiny over its January 18 decision.  On March 1, the Federal Court provided the parliament with a clarification of this decision, emphasizing the freedom of independent institutions from outside interference.   Additionally, the parliament has drafted a law governing the Federal Supreme Court, as provided by the constitution, and is in the process of deliberations and passage.