“Rest assured that America’s investment in Kosovo has not gone in vain. Kosovo is today, free…with a parliament elected by fair and democratic elections” – Hon. Kadri Veseli, Chairman of the Assembly of the Republic of Kosovo

Just a few weeks ago, hundreds of thousands of Kosovars gathered in the capital city of Pristina to celebrate ten years of independence—a significant milestone for the world’s second youngest county. This anniversary represents an incredible journey from oppression to freedom, from voiceless to represented and from dictatorship to democracy. 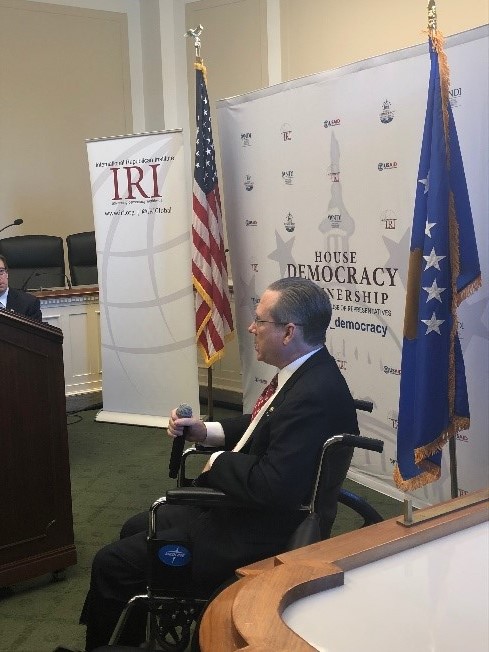 Kosovo has undergone rapid development over the past ten years. In the past decade, Kosovars have seen the development of democratic institutions such as a multi-party parliament, being recognized by international organizations and becoming a close ally of the United States in an ever-evolving region.

As noted by Hon. Kadri Veseli, Chairman of the Assembly of the Republic of Kosovo, the United States has played an integral role in assisting Kosovars on their democratic journey by providing strategic assistance, guidance and aid. A key component of the United States’ assistance has been focused on the development of an open, citizen focused parliament: The Assembly of the Republic of Kosovo. To support this effort, the International Republican Institute (IRI), through the House Democracy Partnership (HDP) and USAID, has partnered with the Assembly to provide technical assistance as it continues to develop committee structures, codes of conduct, transparency and citizen engagement. By connecting members of parliament to their counterparts in the U.S. House of Representatives and bringing expert, technical staff from Congress to Kosovo, IRI and HDP have worked to support the stability and sustainability of the Assembly.

To celebrate Kosovo’s independence, IRI and HDP hosted an event on Capitol Hill highlighting the unique relationship between the United States and Kosovo as well as the impact of U.S. assistance in establishing Kosovo as a free and independent state. Throughout the event, the U.S. Congressional support for ensuring Kosovo’s continued progress was made evident. HDP Ranking Member David Price stated that “Democracy is always a work in progress, never a finished achievement…That is the spirit by which we operate and the spirit that Kosovo brings.” 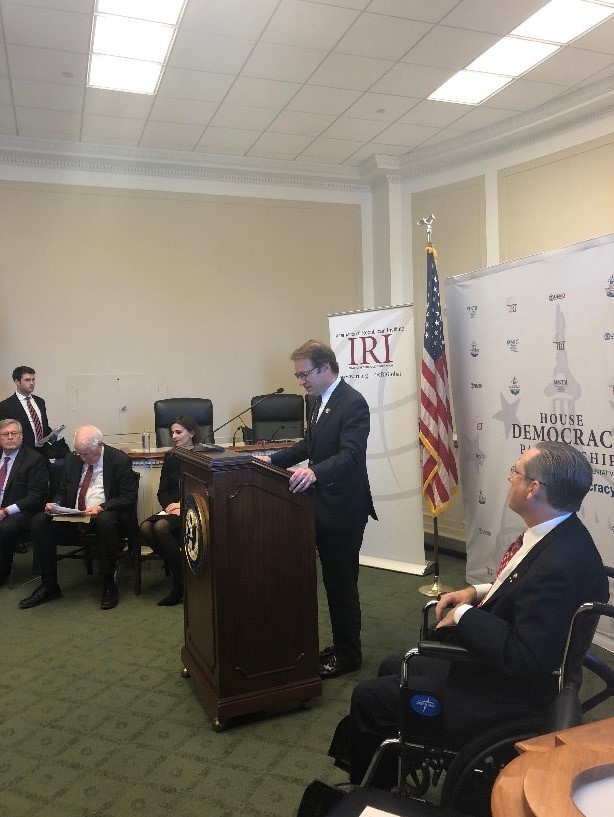 Senator Mark Kirk, an IRI board member, reflected on his own personal experience during the liberation of Kosovo. As a Naval Intelligence Officer, Senator Kirk served during Operation Allied Force and assisted with NATO intervention of the Kosovo War. Senator Kirk expressed his continued support for Kosovo and praised the rapid democratic development that has occurred throughout the country.

Her Excellency Vlora Citaku, Ambassador of the Republic of Kosovo, noted the substantial effect the United States has had on the independence and democratic development of her country, “America inspires us to dream of freedom and to work hard to make better laws, to work harder to become a better version of ourselves. On behalf of the 2 million people of Kosovo, I want to say thank you. We would never have had the chance to celebrate without your support.” Chairman Veseli echoed these sentiments in a video from the parliament and noted that HDP and IRI’s continued support has allowed the parliament to be a true representative of the people’s needs and desires.

Kosovo is a small country in a complex neighborhood, yet it has persevered and continued to strive towards a stable democracy that answers to its citizens.  Kosovo serves as a strong ally to the United States. A strong relationship between a stable, democratic Kosovo in the United States is vital to stabilizing the Balkans region.  It is also an example that when the United States provides strategic assistance and partnerships to fledgling democracies, the benefits can make good on the investment. HDP and IRI will continue to work with Kosovo on its democratic journey and further the strong relationship between our two countries.