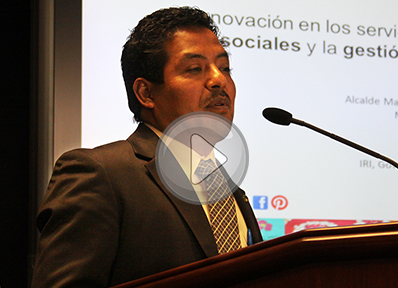 IRI hosted Mardoqueo Cancax, mayor of Patzun, Guatemala, for a discussion on how information and communication technology (ICT) can boost transparency and citizen engagement with government.  The event was the sixth installment of IRI’s Democratic Governance Speaker Series, a public forum that brings together policymakers, practitioners and stakeholders to discuss and share experiences in addressing contemporary challenges to governance.

The discussion, moderated by Constance Berry Newman, a member of IRI’s Board of Directors, former Assistant Secretary of State for African Affairs and former U.S. Agency for International Development (USAID) Assistant Administrator for Africa, showcased examples of how technology is lowering the costs for governments to disseminate information while increasing citizen engagement around public policy.

Miguel A. Porrúa, e-government specialist at the Inter-American Development Bank, discussed ICT connectivity trends throughout the region, the creation of partnerships such as MuNet to promote e-government models, and the importance of increasing capacity to mine and analyze all the data collected through the use of technology.  Porrúa also stressed the need for local political buy-in and local ownership in order for ICT solutions to sustainably contribute to greater transparency, participation, and efficiency.

Mayor Cancax shared ICT initiatives he has undertaken, such as the Digital Community Center which allows for greater participation in governance by civil society, free Wi-Fi in the town square, and using Facebook, Picassa, Pinterest and YouTube to increase government transparency, communicate with citizens, solicit feedback from constituents, and promote local culture and heritage.

In addition to participating on this panel, Mayor Cancax shared his democratic governance initiatives through a series of meetings at USAID, the National Endowment for Democracy and other public and private entities.  To support his interest in smart governance, Mayor Cancax attended meetings with the chief innovation officer for Montgomery County, the chief technology officer for the District of Colombia, and ICT experts from the World Bank Institute and the Organization of American States.