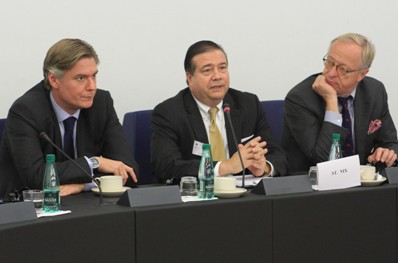 In his presentation, Nix discussed the impact of Georgia’s October 1, 2012 parliamentary elections on Eastern Europe and the outlook for Ukraine’s October 28, 2012 parliamentary elections.  Nix specifically emphasized the importance of the Georgian election as it was the first peaceful transfer of power in the Caucasus republic.  In Ukraine, Nix noted, the jailing of the major opposition figures created an uneven playing field favoring the ruling party.

In addition to his presentation to the Working Group, on November 16, 2012, Nix also briefed the U.S. Helsinki Commission, chaired by Congressman Christopher H. Smith (NJ) and co-chaired by Senator Benjamin L. Cardin (MD), on the obstacles Ukraine’s October 28, 2012 parliamentary elections pose to the country’s democratic development.

In that briefing Nix said, “Unless and until Ukraine improves the environment in which campaigns are conducted, it will not be considered a full democracy and will not be able to fully integrate into Euro-Atlantic structures.”