The International Republican Institute (IRI) hosted an eight member U.S. Congressional Delegation from the House Democracy Partnership (HDP) in Peru beginning on August 16, 2009. HDP was created in the U.S. House of Representatives in 2005 to work with emerging democracies throughout the world. During thefirst two years the Commission partnered with 12 countries. This year, under the leadership of Chairman David Price and Ranking Member and IRI Board Member David Dreier, HDP is partnering with two additional countries. During the delegation’s trip a formal agreement was signed with the Peruvian Congress,making Peru the newest partner of the commission.

As part of the agreement, the delegation exchanges ideas and best practices with partner members. To gain a more complete understanding of the realities the members of Peru’s Congress face, the U.S. delegation visited the local office of Peruvian Congressman Juan Carlos Eguren in the city of Arequipa. Congressman Eguren has partnered with IRI in the Pilot District Office initiative that works to improve member-constituent relations. The program promotes more effective outreach efforts and consistent channels of communication with constituents. During the office visit, the delegation talked with Eguren about the challenges and value of maintaining close contact with constituents. Congressmen Eguren explained that several variables hinder effective representation: a lack of resources,members of Peru’s Congress see little value in outreach and citizens failing to understand their responsibility to hold members accountable. Through the HDP program, members and staff from the U.S. Congress will work with their counterparts to explore solutions for these concerns.

On Tuesday, August 18, 2009, the delegation attended a lunch at Peru’s Congress in Lima, hosted by members of the Peruvian Women’s Parliamentary Roundtable. The roundtable is Peru’s first multi-partisan women’s congressional caucus. IRI helped create the caucus in 2006 and has continued to support the work of the women with legislative and campaign training courses. Because women account for nearly 30 percent of Congress, this caucus has great potential to affect legislation when the members align efforts. To highlight this potential, U.S. Congresswoman Lois Capps, Chairwoman of the Caucus for Women’s Issues, and Lucille Roybal-Allard, former Chairwoman of the Congressional Hispanic Caucus, spoke about their experiences in the U.S. Congress and the strength that caucuses possess when members work together. Both speakers highlighted important pieces of legislation their caucuses were able to pass by concentrating their efforts.

Following the lunch the delegation attended the formal signing ceremony in Congress. In the coming months, the U.S. Congress will serve as host to members of Peru’s Congress in Washington, D.C. 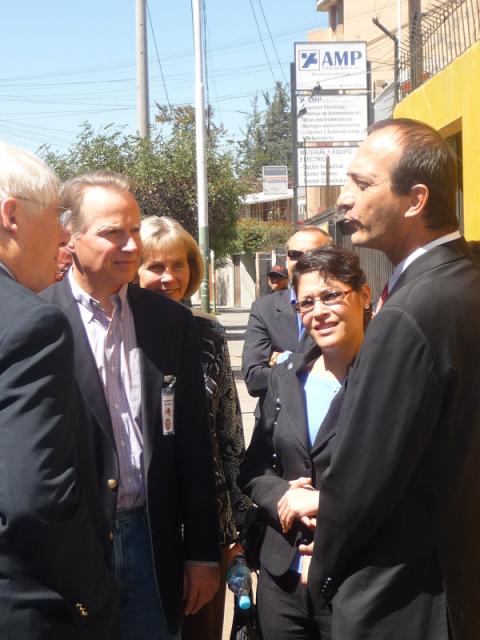