When asked to rank which local issues should top their municipality’s list of priorities, Jordanians consistently list “city cleanliness” near the very top.

There are many reasons why cities have problems with litter, and most are difficult and costly to tackle. These reasons include: an insufficient number of city trash cans, too few garbage trucks to service the city, and a lack of recycling facilities, just to name a few. However, there is one common cause of city litter that is possible to address, even with limited resources—decreasing the use of disposable plastic bags. The Jordan Times highlighted growing public awareness and government tracking of the issue: “In Jordan, more than three billion plastic bags are used each year, according to Environment Ministry estimates in 2012, which means that each person uses 1.6 bags per day and 584 bags a year…According to official estimates, more than 30 million bags a year are littered across the country.” In recent years, IRI has assisted municipalities in conducting countless city clean-up events to help reduce this litter, but more recently, IRI has begun to strike at a root cause of the issue. 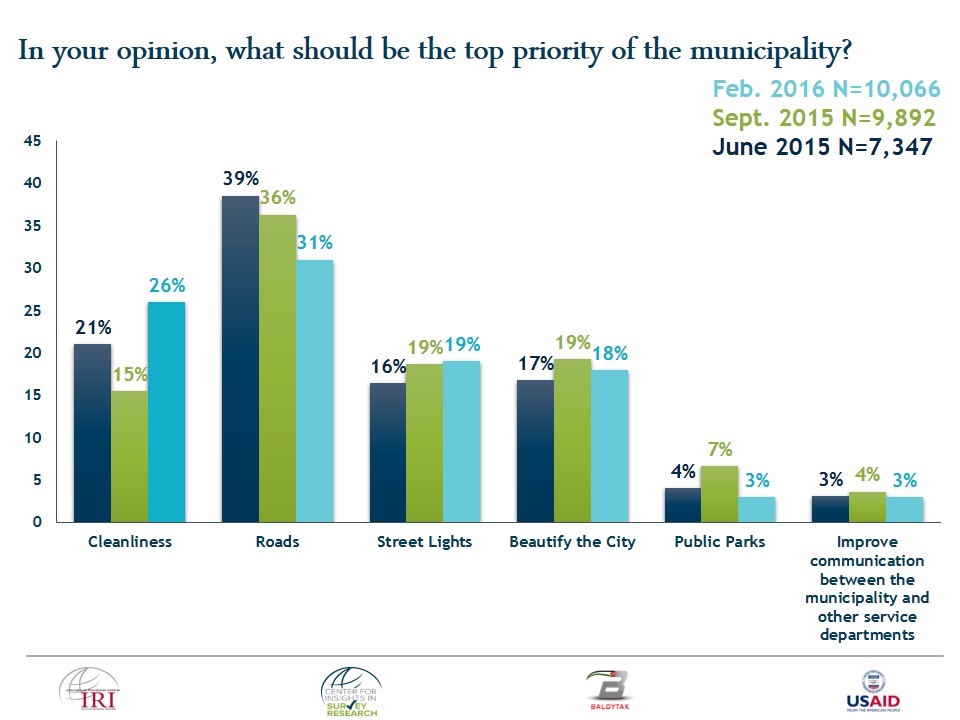 The launch of the reusable shopping bag initiative

To begin, IRI staff tested various reusable bags available for purchase in Amman to find an inexpensive bag that was also resilient enough to be used on a daily basis. Once a suitable bag was found, IRI created a cityscape logo to be printed on each bag, spelling “Your Municipality” in Arabic. Above this design, the phrase “Keep Your Municipality Beautiful” is also printed in Arabic. 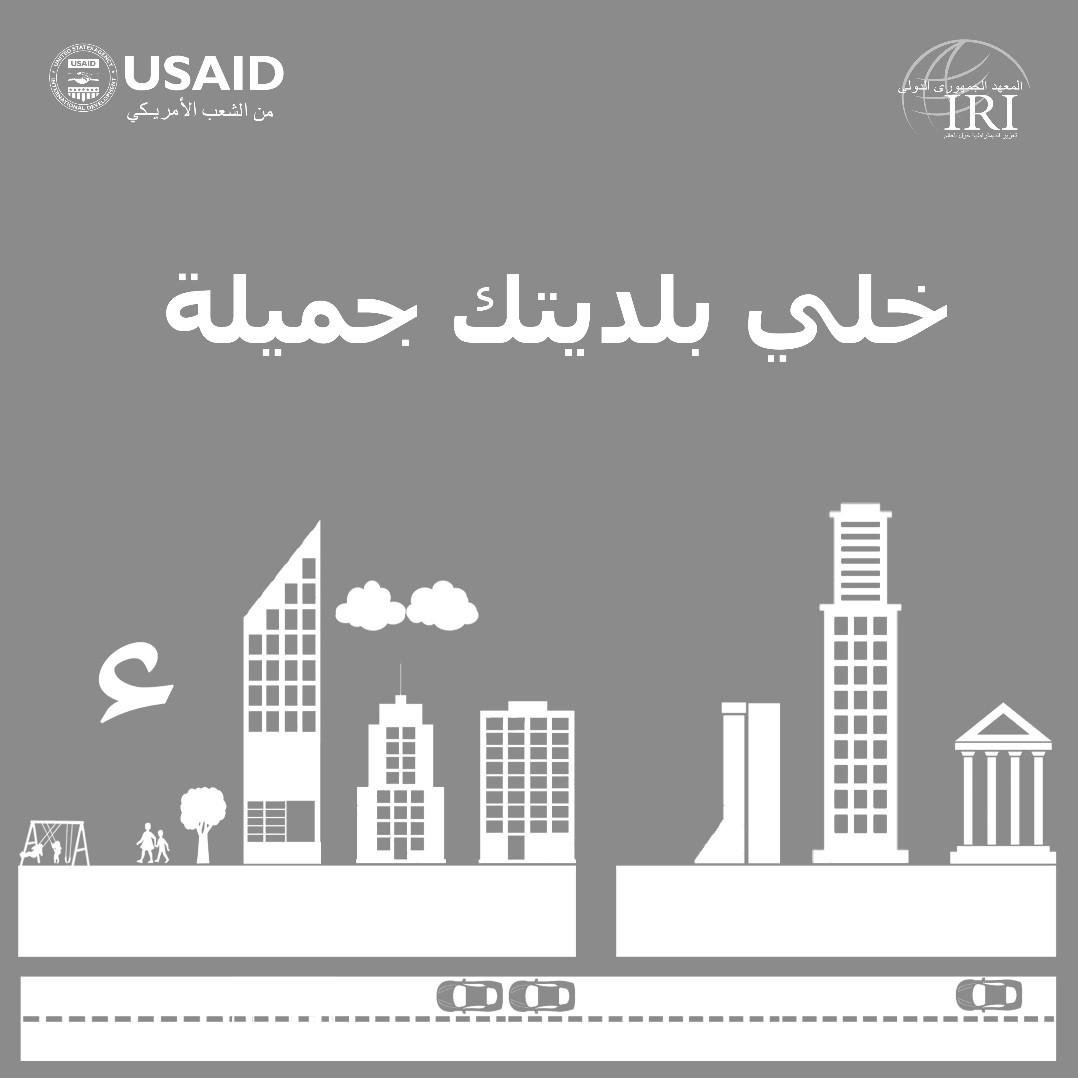 Once the bags were ready, IRI began setting up workshops for Jordanian municipalities to introduce this new initiative. Thus far, 12 municipalities have hosted a workshop on the topic. Workshop participants often include mayors, municipal councilors, city staff, IRI Citizen Committee members (local activists), and interested citizens. During these workshops, IRI presents the many benefits of reusable shopping bags, including: reduced litter (leading to a more beautiful city and a potential increase in tourism); reduced costs to consumers, who are indirectly charged by store owners for disposable shopping bags; less plastic that city maintenance crews must collect and transport to landfills each day; and improved health of local farmers’ livestock. The United Nations Educational, Scientific and Cultural Organization (UNESCO) office in Amman says, “Every year, an estimated 60,000 sheep in Jordan suffer from weight loss or mortality due to blockage of the digestive system as a result of eating littered plastic bags.” Given the already stretched budgets of municipalities, and the importance of tourism and agriculture to Jordan’s economy, once presented with these facts, workshop attendees began to see the downsides of disposable plastic bags. 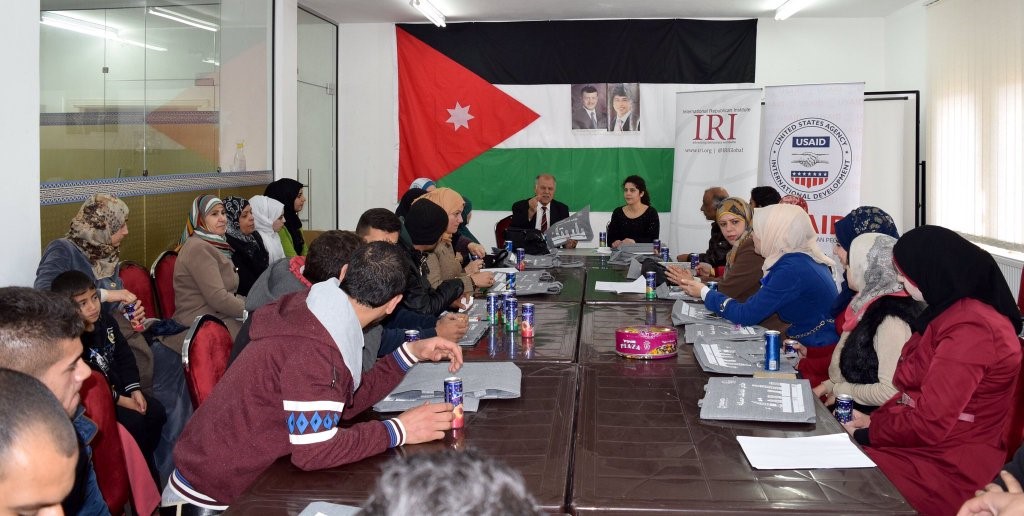 IRI staff provide examples of how other cities around the world are curbing disposable plastic bag consumption. One example used is of cities that require merchants to charge a nominal fee for each plastic bag, with the revenue earmarked for local environmental protection projects. While this particular idea would be difficult to implement in Jordan, it does get participants thinking about other tactics that might work within the context of Jordan to reduce plastic bag use. A few ideas that have been raised include: requiring stores to agree to provide reusable shopping bags as a prerequisite to obtaining their business license, conducting information sessions at primary schools about the harmful environmental effects of plastic waste, coordinating with local associations to develop advocacy campaigns in support of reusable bags, and inviting shopkeepers to meet with municipalities to discuss ways in which the stores can limit the number of bags provided to customers each day. Currently, it is commonplace in Jordan for each type of item purchased at a store to receive its own bag. 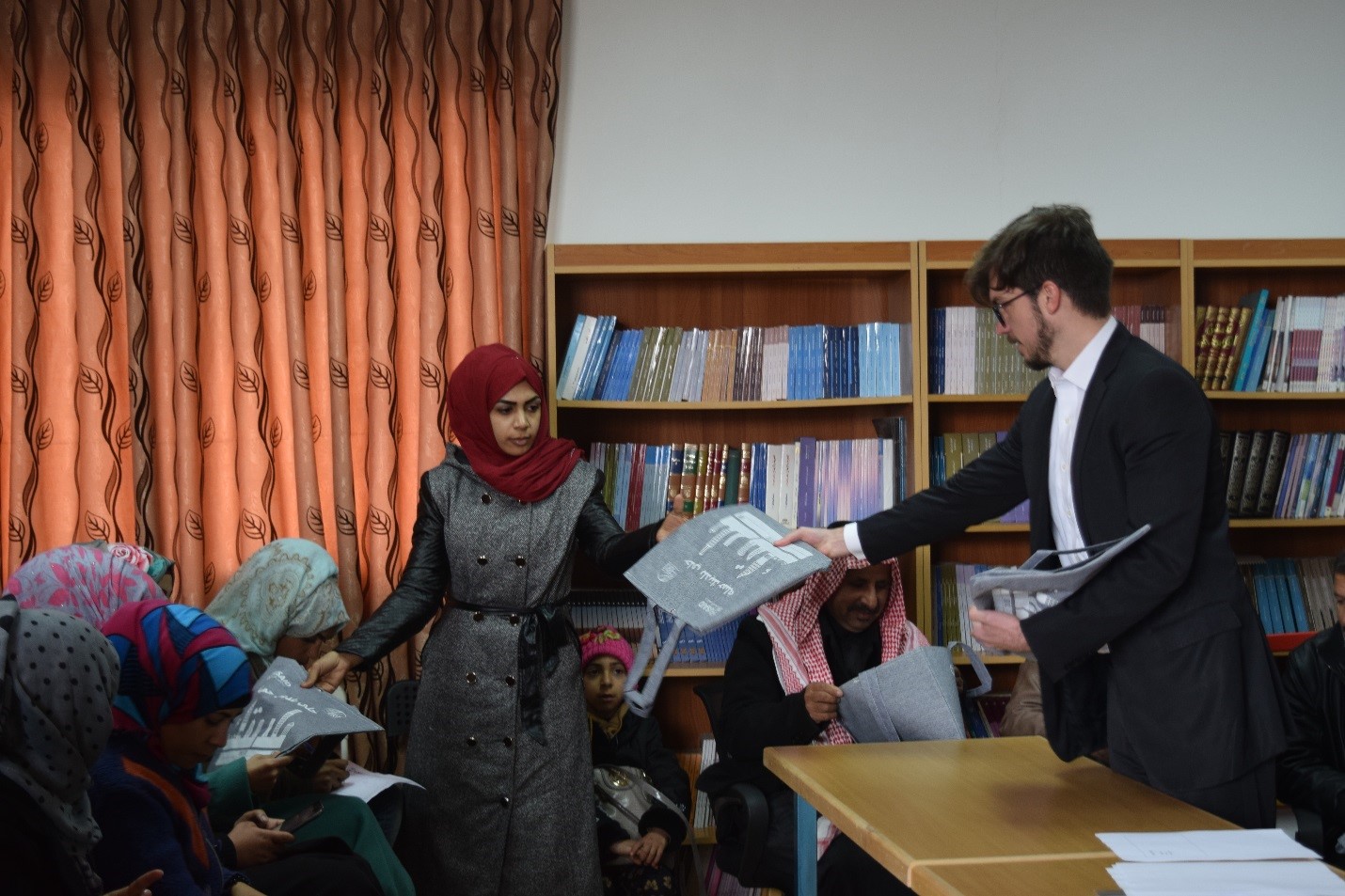 The next stage of the reusable bag initiative

IRI is now leveraging the creation of the bags to address additional issues facing Jordan, namely: unemployment among women, surplus grain sacks entering local landfills, and integration of Syrian refugees. IRI has formed an alliance with Al-Keram Association in Mafraq Governorate, the area of Jordan hosting the majority of Syrian refugees, to have their members sew used grain sacks into reusable shopping bags. The Association had a preexisting sewing program for women interested in learning a trade to increase their employment opportunities, but now, instead of just practicing sewing techniques, the women are being paid to sew bags that will be used across Jordan. The process begins with Association members approaching local farmers or fabric wholesalers to obtain used grain sacks made from burlap. Each sack is marked with a colored stripe which indicates the type of grain that was originally in each bag, making each bag visually unique. 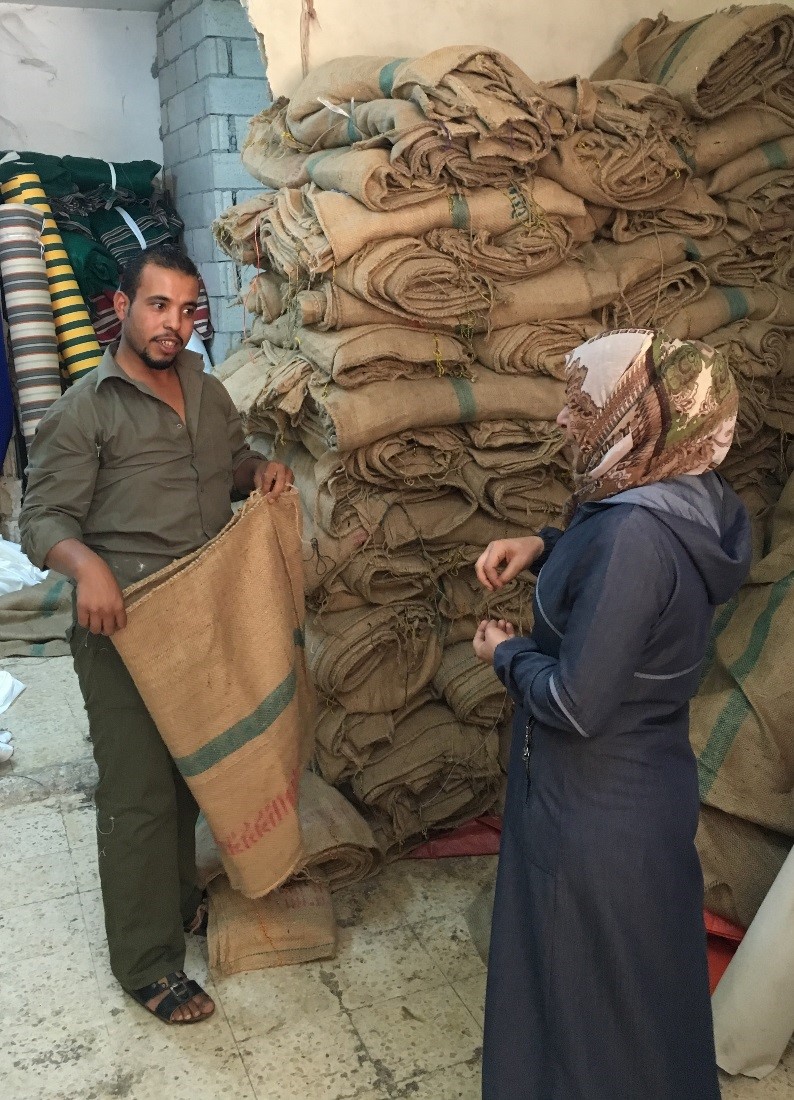 Once enough raw material is collected, Jordanians and Syrian refugees work together to create durable, reusable shopping bags. The director of Al-Keram Association has noted, “The women’s work alongside one another enhances their sense of integration and acceptance within the community.” Furthermore, by IRI’s purchase of these bags in Mafraq benefits the local economy. In addition, by utilizing repurposed fabric and buying the bags outside of Jordan’s capital, IRI is saving money (22% per bag). These savings will then be used to produce even more reusable bags for Jordan. 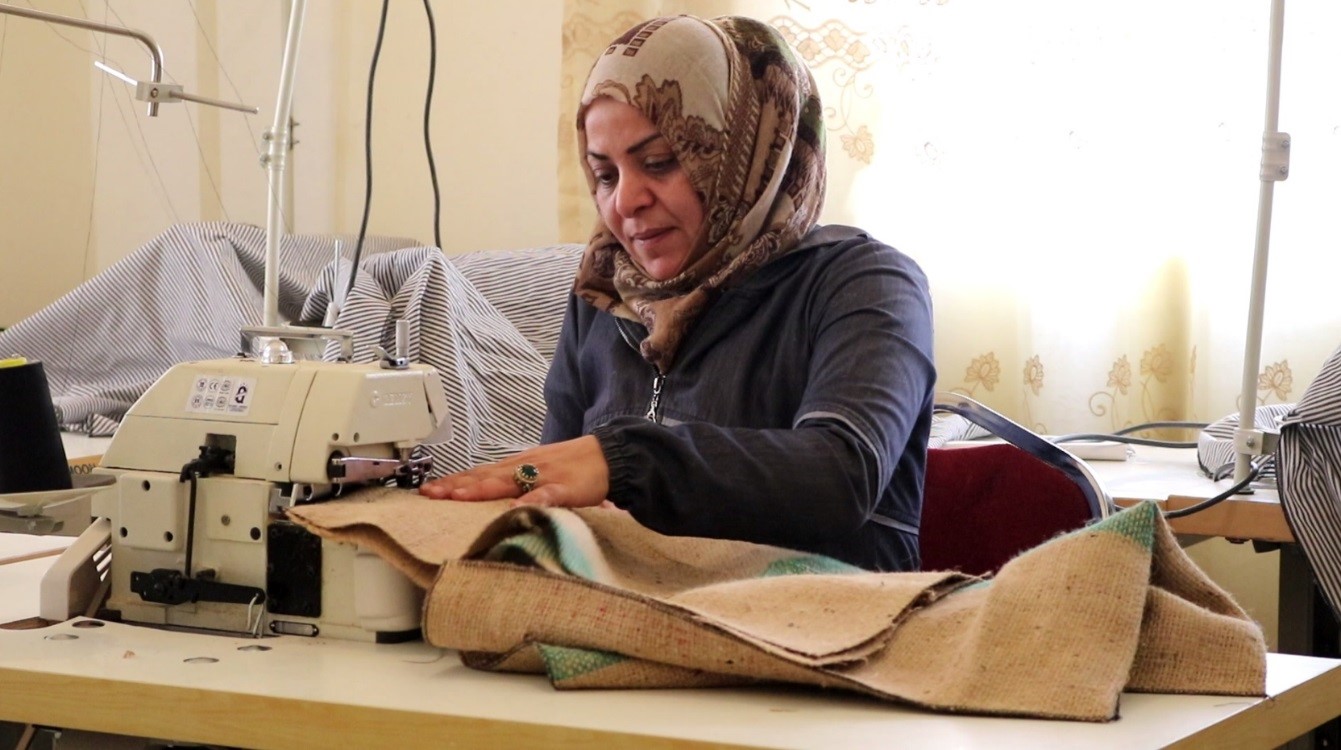 Like all new initiatives, it will take time for reusable shopping bags to become popular in Jordan. However, because the number of disposable bags used each day is so staggering, if even one in 10 of the citizens who receive one of IRI’s 1,900 reusable bags adopts the idea, the initiative will stop more than 110,000 plastic bags from entering Jordan’s waste stream each year!