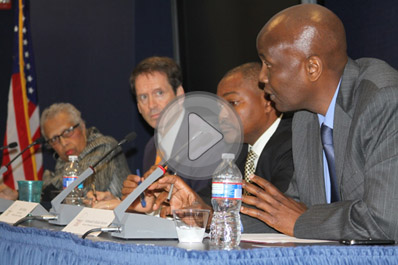 Democratic Governance in Africa: Does it Exist and is it Delivering? was the topic of discussion at the second installment of IRI Democratic Governance Series.  The series is a public forum designed to bring together policymakers, practitioners and stakeholders to discuss and share experiences in addressing contemporary challenges to governance.

The July 19 event gathered people from the Washington policy and development communities, and featured remarks by Mark Green, Senior Director of the U.S. Global Leadership Coalition and member of the Board of Directors of the Millennium Challenge Corporation; Elkanah Odembo, Kenya’s Ambassador to the United States; and John Mcharo, Deputy Mayor of Mombasa, Kenya, where IRI conducts democratic governance programs.  The discussion was moderated by Constance Berry Newman, former Assistant Secretary of State for African Affairs, Assistant Administrator for Africa at the U.S. Agency for International Development and a member of IRI’s Board of Directors.

Newman began the discussion by noting challenges and opportunities faced by development partners working to promote democratic governance in Africa.  Green identified linkages between democratic governance and development and offered personal observations from his experiences living and working in Africa.  Ambassador Odembo spoke of the gains in democratic governance in Africa, focusing on the recent constitutional reform process and its ongoing impact throughout Kenya.  Finally, Deputy Mayor Mcharo concluded the discussion by offering his observations on the potential impact of Kenya’s constitutional reforms such as devolution, and highlighting new governance initiatives carried out during his administration in partnership with IRI.  The Mombasa program was carried out with funding from the National Endowment for Democracy and included improving municipal performance and engaging citizens in decision-making processes through participatory mechanisms.

While noting the value and impact of governance efforts throughout Africa, panelists also discussed challenges to success.  Effective and democratic governance is a necessary condition to achieving greater development in Africa by stressing the importance of governments and citizens working together to build stronger communities, reinforce the rule of law and build representative institutions to ensure that democracy delivers.

IRI conducts democratic governance programs, working alongside political and government actors, citizens and civil society, to bring government closer to citizens, transforming government into a responsive, transparent and effective institution.  IRI has been active in Kenya since 1992, conducting programs to strengthen political parties and democratic governance while fostering the participation of women, youth and disenfranchised communities in the political process.