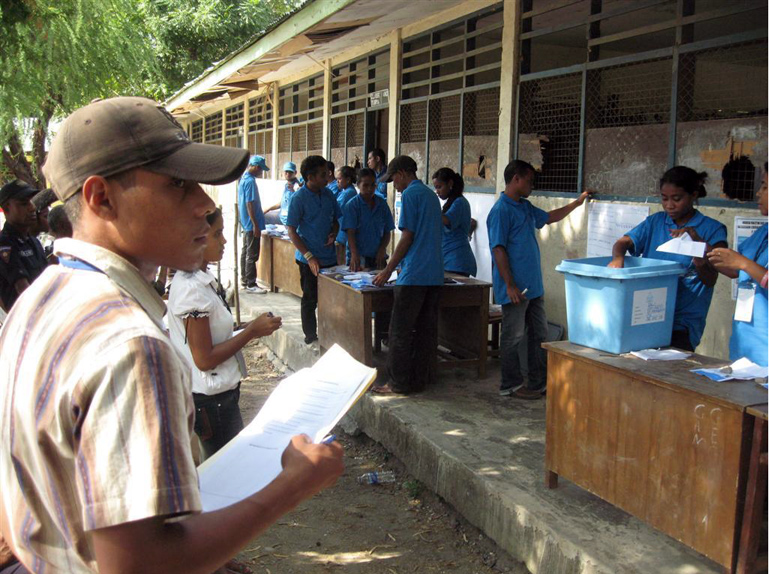 IRI, to encourage integrity in Timor-Leste’s first nationwide elections since 2007, supported two groups of first-time domestic election observers for the country’s election of community leaders on October 9, 2009. As part of Timor-Leste’s broader initiative to improve governance through decentralization, the country held elections for community leaders at the suco, or village, level.  In addition to contributing to the transparency of the election, IRI’s work with Youth for Democracy in Action (JDA) and with the Dili Institute of Technology (DIT) created new opportunities for young citizens in Timor-Leste to participate in the democratic process.

Seventy-two accredited observers from IRI’s youth network, JDA, observed 44 polling centers in and around Dili, Timor-Leste during the election.  In total, they observed voting in 22 sucos from the opening of the polls until the completion of counting.  Key issues noted in JDA’s final report were long lines in the morning, slow cross-referencing of voters to the electorate list and inconsistent inking of fingers. However, no evidence disputing the integrity of the results was raised by IRI-sponsored observers in Dili or other stakeholders nationwide.  A statement issued by JDA, detailing their observation of the elections can be found here.

The deployment of JDA’s observers followed two days of training by IRI on the new suco council law, election procedures, purposes of election observation and specific reporting guidelines.  On the day after the election, IRI staff helped JDA turn their observations into a set of recommendations for future elections.

“On Election Day I got to directly observe the process of democratization in my country.  This was a new experience for me,” said JDA member Quirmado Araújo Pinto.  “I was able to identify election irregularities like we had learned about through IRI’s training.  How this election was run was really important to me as a citizen of Timor-Leste.”

Furthermore, upon the request of several students, IRI provided electoral observation training to 14 students from the Department of Computer Science at DIT.  The initiative taken by the students at DIT demonstrates anecdotal evidence of the large youth population’s desire to be involved in their country’s future.  Unlike JDA’s 72 stationary observers in Dili, DIT’s 14 observers deployed across the county to their home sucos and operated as mobile observers throughout the day.

Motivated by the positive experiences and questions from their classmates, the suco election observers from DIT are currently organizing to cover the series of municipality elections to be held in 2010, according to the DIT’s Rector, Estanislau S. Saldanha.