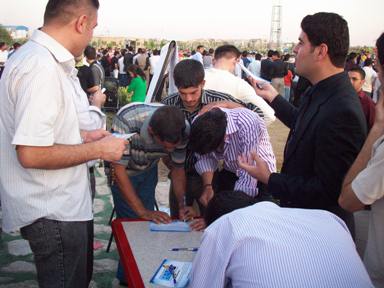 In January 2007 The International Republican Institute (IRI) launched the Aynda Center for Youth Issues in Erbil as an advocate for the needs of Iraq’s large youth population in the north of the country.  Since that time Aynda, meaning “Future” in Kurdish, has become the premiere youth advocacy organization in the Kurdistan Region, launching several successful advocacy campaigns, and gaining recognition by the Kurdistan Regional Government (KRG).

As early as 2005 youth groups around Iraq began campaigning to reduce the age required to run for public office from 30 to 25, and with the creation of the Aynda Center in 2007 this effort, called Campaign 25, increased in the Kurdistan Region.  After almost two years of public awareness campaigns and government outreach, Aynda succeeded in lobbying the KRG to lower the candidacy age in advance of the Kurdistan Region’s July 2009 parliamentary elections.  Following that success, Aynda helped train young candidates running for parliament in that election, and in large part due to the Center’s efforts, today four percent of the Kurdish Region’s parliament is under the age of 30.  These youth representatives would not hold their seats without the efforts of the Aynda Center.

Following on its success during Campaign 25 and the subsequent July regional parliamentary elections, Aynda used the networks it had developed to pursue new initiatives in support of the region’s youth.

After the July 2009 elections, Aynda conducted training and orientation for the newly-elected youth representatives on coalition-building, strategic communications, and constituent relations.  Working in coordination with these young members of parliament (MPs), in fall 2009 Aynda developed a new initiative to assist the Kurdistan Region’s youth called the Kurdistan Youth Future Fund (KYFF), a KRG-funded microloan program to assist youth in starting small businesses.  Following months of awareness and advocacy activities, on June 27, 2010, a delegation from Aynda formally presented the bill to create the KYFF to a caucus of 10 young MPs.  The Youth Caucus officially submitted the bill to the Kurdistan Parliament speaker’s office on the same day, and the next day the KYFF bill was tabled during the Parliament’s last session before the summer recess.  Receiving much support from lawmakers, the bill was then submitted directly to the Legal, Youth and Sport, and Financial Committees for their opinions before the second reading in September.

Separately, as the KRG considers changes to the region’s law overseeing nongovernmental organizations, Aynda has formed a grassroots coalition to ensure the voice of civil society is heard.  With more than 35 groups in the coalition, it has developed amendments to the proposed legislation, and delivered these recommendations to the Kurdish parliament for consideration upon its return to work in September.

Aynda has been recognized by the KRG as the pre-eminent youth advocacy organization in the Kurdistan Region, and its former executive director now serves as a special advisor to Prime Minister Barnham Salih on civil society and youth matters.  The Aynda Center for Youth Issues is a strong example of the positive impact civil society can have on government, and with IRI support will continue to advocate for youth issues in the years ahead.

This post is part of a series of guest posts by the International Republican Institute (IRI).