As many of us know all too well, violent extremism knows no bounds. A Christmas market in Berlin, a Bastille Day parade in Nice and a pop concert in Manchester all were unexpected settings for some of the deadliest terrorist attacks in Western Europe these past two years. Now, with the breakup of the so-called Islamic State imminent, leaders across Europe are preparing for the potential return of radicalized foreign fighters inside the continent’s borders.

At the center of it all, just years removed from a war that left approximately 100,000 dead, is Bosnia & Herzegovina (BiH). A Muslim-majority, former Yugoslav state, BiH saw approximately 240 individuals abruptly relocate to Iraq and Syria in the name of jihad from 2012 to 2016. And with a fractured domestic political landscape already hanging by a thread, a potential bump in violent extremism is a major national security threat that could cause further division amongst the country’s main political parties.

Indicative of what is clearly a wide-reaching, intercontinental threat, on October 31, 2017, Bosnian authorities extradited Kosovo-born Mirsad Kandic to the United States – one of the most wanted alleged associates of the Islamic State. Kandic, a legal permanent resident of the United States, fled the country in 2013, and was ultimately arrested in Sarajevo after a complex Bosnian inter-agency operation. Citing Kandic’s alleged assistance of Australian suicide bomber Jake Bilardi, US authorities charged the Islamic State associate for acts of conspiracy and attempting to provide support to the transnational extremist group.

In 2015, IRI developed a Task Force of Western Balkan legislators, academics and thought leaders focused on developing best practices in countering violent extremism and mitigating malign foreign influence. With its genesis in IRI’s Task Force, in the fall of 2017, IRI and the BiH Ministry of Security formed a working group of law professors, judges, prosecutors, and law enforcement officials – one of the first collaborations between civil society and government of its kind in BiH – to thoroughly dissect and suggest improvements to BiH’s current Criminal Code.  But beyond being clearly focused on strengthening BiH’s national security by proposing policy revisions, the Working Group’s efforts play an important supporting role in Sarajevo’s journey to join European institutions by harmonizing BiH domestic policy with the EU Directive on counterterrorism – part of BiH’s overall effort to strengthen the rule of law and coordinate policies with Brussels benchmarks. Indicative of the group’s strong commitment to transatlantic coordination, two working group members directly involved in the arrest and extradition of Kandic, State Prosecutor Dubravko Campara and Suad Hasanovic from the State Investigation and Protection Agency, traveled to New York to attend Kandic’s US District Court appearance and assist U.S. authorities while juggling their working group duties.

BiH’s Counter-Terrorism Strategy (2015-2020) calls for the improvement of the country’s legislative framework for combating terrorism/violent extremism and aligning the Criminal Code’s framework with international standards. To assist top Bosnian decision makers, the working group consulted the two most relevant legal documents: the EU Directive on counterterrorism and the Additional Protocol to the Council of Europe on the Prevention of Terrorism, and drafted amendments that will align BiH’s legal framework with the legal framework of EU member states.

Paving the way for more effective prosecution and international legal assistance, the proposed amendments specifically call for the criminalization of violent extremist training and funding, organizing or otherwise facilitating international terrorism-related travel. The working group is also proposing to further bar the use of internet platforms and social networks for terrorism by including the downloading of online, terrorism-promoting instruction manuals in the provision’s definition of violent extremism training.

After a series of meetings, the working group finalized its recommendations and draft amendments in December 2017. For those familiar with the NGO sector, this is often where the curtain falls. However, due to IRI’s position as a trusted Western intermediary in Sarajevo, IRI is optimistic that key partners in parliament and government ministries will support these policy proposals. From here, the Ministry of Security will share the amendments with the BiH Council of Ministers while IRI shares the proposed adjustments with the international community in BiH (detailed below). 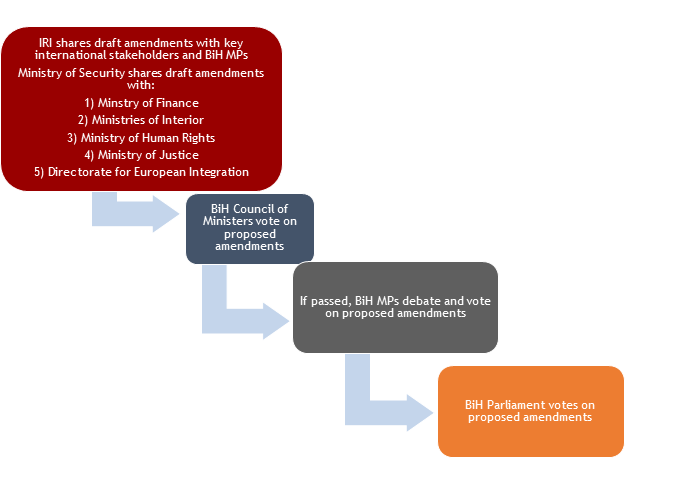 These steps, if taken, will refine the Criminal Code, already one of the most forward-thinking laws in the region, into an effective deterrent of violent extremism, and could also propel Bosnia and Herzegovina further down the European integration path.